At Florida commencement ceremony, ‘Don’t Say Gay’ lives up to its billing 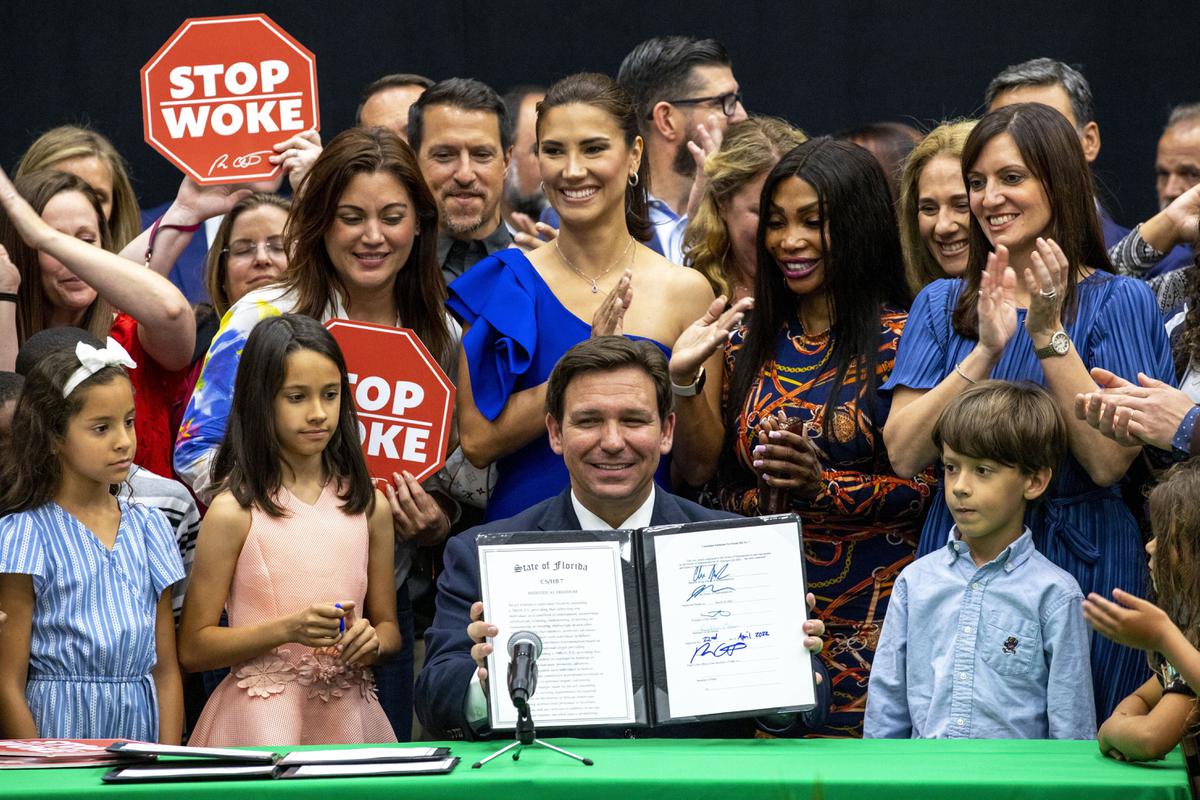 Florida Gov. Ron DeSantis reacts after publicly signing HB7, “individual freedom,” also dubbed the “stop woke” bill during a news conference at Mater Academy Charter Middle/High School in Hialeah Gardens, Fla., on Friday, April 22, 2022. DeSantis also signed two other bills into laws including one regarding the “big tech” bill signed last year but set aside due to a court ruling, and the special districts bill, which relates to the Reedy Creek Improvement District. (Daniel A. Varela/Miami Herald via AP)

A Florida principal took the state’s new “Don’t Say Gay” law to new heights over the weekend when saying the word “gay” was not only prohibited from classroom instruction, but from student speeches at a graduation ceremony.

Zander Moricz, who was repeatedly elected to serve as class president throughout his time at Pine View School for the Gifted in Osprey, Fla., says he was called to the principal’s office prior to his graduation speech. He was told that any reference to his own sexuality, coming out, or activism on LGBTQ rights, or any mention of Florida’s new law, would result in his microphone being cut off.

Moricz told the local ABC News affiliate that “It was like a sledgehammer to the face. I could not comprehend it because it felt so backwards. … I’m the class president and my human rights are not appropriate for my speech at my school graduation.”

We agree that it is backwards and shameful, not only for the school or the proponents of the legislation, but for a Republican Party that has declared war on education in the United States.

Florida Gov. Ron DeSantis signed the bill into law in March with state legislators claiming it was about restoring parental rights in education. But in this case, the bill’s only connection to parents seems to be protecting conservative parents from having to acknowledge the existence of a student who is both gay and excelling.

Defenders of the law have repeatedly pointed to the fact that the bill doesn’t contain the word “gay.” This is true, but irrelevant.

What the bill does specifically prohibit is “classroom instruction by school personnel or third parties on sexual orientation or gender identity.” Unless GOP leaders are referring to use of the word “gay” as merry or cheerful, banning discussion of sexual orientation would almost certainly include all modern uses of the word “gay.” For GOP leaders to proclaim otherwise is both manipulative and deceitful — in other words, a lie.

Even more disturbing, the bill’s preamble specifically states that it is intended to prohibit “discussion about sexual orientation or gender identity.” This means the bill is not only anti-LGBTQ but is also anti-free speech.

In other words, it’s not just Moricz’s human rights that are apparently inappropriate for his high school graduation speech. According to the preamble, any discussion of his identity or existence, even among his own classmates, is unacceptable.

This is hate, in its most bare form.

It’s a law intended to silence free speech and learning in our schools because GOP leaders realize they can’t justify their continued attack on civil and human rights, even to impressionable kids, if those kids are given access to honest and accurate information.

We shouldn’t be surprised.

And yet, at the end of the day, the American people keep electing the same Republican leaders. Sure, they use gerrymandering, voter ID laws and other forms of voter suppression and electoral manipulation to win in places where they might otherwise lose. They’ve admitted as much many times in the past. But after two generations of fighting to defund education, ban books and dehumanize people like Zander Moricz, they shouldn’t be winning anywhere.

Republicans promise greater prosperity and less government regulation. But how can we be prosperous as a country while denying access to education and watching our children fall further and further behind? How can we have less government regulation when a high school student is being told what he can or cannot say to his own classmates, about his own identity and experiences, at his own high school graduation? The simple answer is that we can’t.

Zander Moricz fought back by delivering a masterful graduation speech this weekend about his curly hair. How his curly hair was a part of who he is, and so, he learned to embrace it.

“I used to hate my curls. I spent mornings and nights embarrassed of them, trying desperately to straighten this part of who I am. But the daily damage of trying to fix myself became too much to endure,” he said.

And true to the law, he never once said the word “gay.”

But this fight shouldn’t be on the backs of 18-year-old high-school students. It’s up to us to fight for our children’s education, one book, one subject, one lesson at a time.

CCSD short by more than 1,300 teachers as students return to class Monday