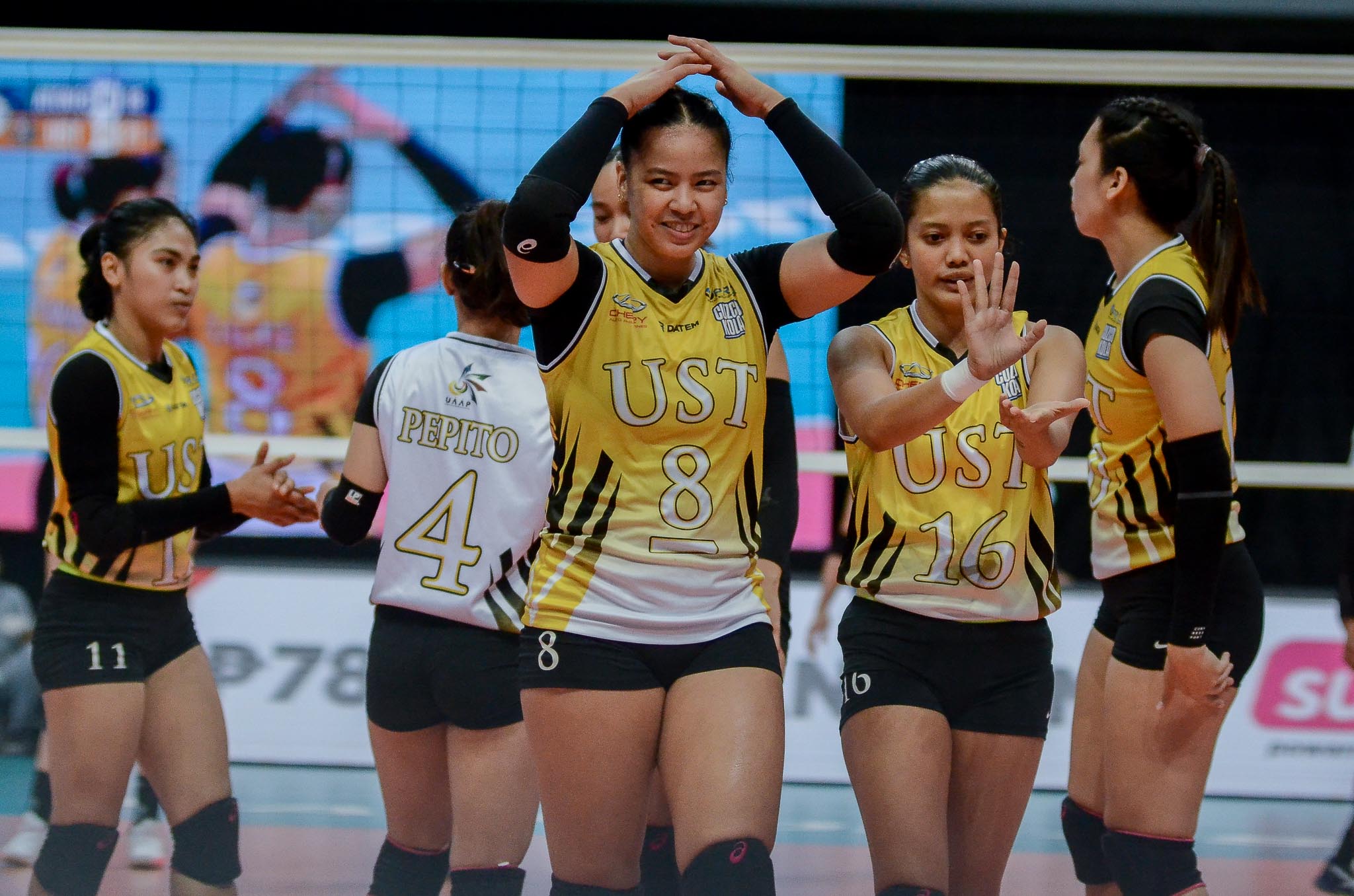 Eya Laure (No. 8) leads a UST squad that features young standouts like Bernadette Pepito (No. 4) and Maji Mangulabnan (No. 16) who, like her, come from UST’s high school program. —UAAP MEDIA

In a marathon game that featured a hyperextended fourth set, Eya Laure found herself at one point screaming over the din to get her message across to her teammates.

“There are no cowards among tigers,” she said.

By the end of the game, she had proven her point even more emphatically than her words could ever do. Her 31-point performance—a career-best—propelled University of Santo Tomas (UST) to a 25-19, 25-21, 29-31, 33-31 over a rolling Ateneo team that had previously won three straight games after limping out of the gates in the UAAP Season 84 women’s volleyball tournament.

Laure had no inkling that she was headed for a career night against the Blue Eagles.

The queen Tigress was simply trying to atone for earlier miscues she committed. And she wanted to lead a relatively young squad in a match that couldn’t seem to find an ending.

“It really ended up a battle of who had the tougher mind and heart,” Laure said of the match. “There were times when I started doubting myself. But coach Kungfu [Reyes] was always there to remind me to bounce back, forget [my mistakes] and keep trusting myself.”

The former UST high school hotshot has been a picture of consistence in the tournament. While producing kills in bursts has been her specialty, she has also covered the floor well on defense, sometimes notching twin digits in excellent digs and receptions—assembling volleyball’s version of a triple double. “I really am just so happy to be able to play for UST after a two-year absence,” she said in a message sent to the Inquirer. “I had many [career] options but I really wanted to suit up for UST this season.”

And the numbers show her worth. The 23-year-old Laure has emerged the top scorer after the first round with a total of 160 points broken down into 143 attacks, 11 blocks and six service aces. And her statistics aren’t empty calories; Laure is producing all that for a team that is tied for second in the league at five wins and two losses.

To put those numbers into context, the next best scorers are Ateneo’s Faith Nisperos (127 points), La Salle rookie Leiah Malaluan (109 points) and University of the East’s Ja Lana (102 points). Of those three, only Malaluan is playing for a team with a record better than .500.

Laure plans to milk the UAAP break to recover. Although she said UST’s crowd has helped in that department by buoying the Tigresses’ energy.

“Our ‘seventh man’ is always out there to tirelessly cheer for us every game,” said Laure. “They always find a way [to support the team]. How can we be tired if we hear the cheers that we’ve missed the past two years?”