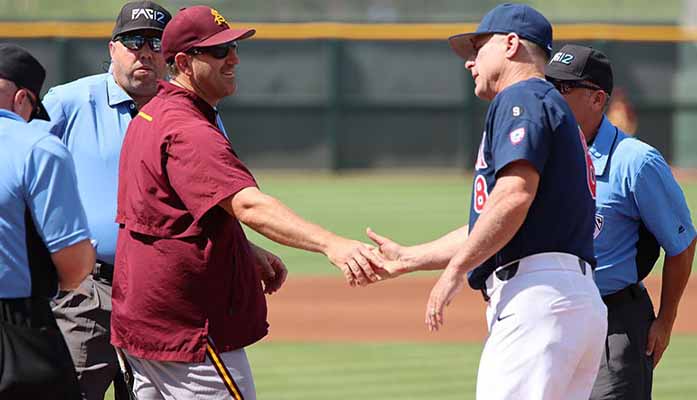 SCOTTSDALE – In many ways, the three games that Arizona State played from Wednesday to Friday in the inaugural Pac-12 Baseball Tournament were a microcosm of the Sun Devils’ season.

ASU received contributions from up and down its lineup to rally back from early deficits and stay competitive, and even led in the seventh inning in each of those three games. But twice – both in Wednesday’s first-round matchup against No. 1 seeded Stanford and in Friday’s elimination game against archrival Arizona – ASU’s bullpen could not preserve the lead, giving up clutch late hits that ultimately cost the Sun Devils.

“We’ve certainly got to get better moving forward, and I have to get better as a coach,” said Willie Bloomquist, who finished 26-32 in his first year as ASU’s coach. “Now that I’m experienced, I understand what type of things I have to do a better job at, and we’ll regroup at the end of the year and adjust moving forward.”

Those struggles in key moments continued a season-long trend for the Sun Devils’ pitchers under Bloomquist and pitching coach Sam Peraza, also in his first year at ASU. The two had to scramble to retool the team’s pitching staff via the transfer portal after several pitchers from the previous year’s squad left the program following the departures of former head coach Tracy Smith and former pitching coach Jason Kelly. The result was a staff that, despite some bright spots, lacked depth and consistency throughout the season. The Sun Devils finished with a 6.73 ERA as a team.

“Obviously, we’ve got to get some more depth across the board for pitching,” Bloomquist said.

In a testament to that lack of depth, sophomore relievers Blake Pivaroff and Brock Peery each pitched in all three Pac-12 tournament games. Entering with a one-run lead in the bottom of the seventh on Wednesday, Pivaroff promptly gave up a single to Stanford’s No. 9 hitter Adam Crampton and a two-run home run to leadoff man Brock Jones, putting the Cardinal ahead for good. Peery gave up a two-run shot of his own in the eighth to Stanford’s Drew Bowser.

But after the Sun Devils beat Oregon in the loser’s bracket Thursday – thanks in large part to scoreless innings from Pivaroff and Peery after sophomore outfielder Kai Murphy’s go-ahead home run in the seventh – the duo again struggled in Friday’s win-or-go-home Territorial Cup matchup against Arizona. Pivaroff pitched a scoreless bottom of the seventh against the top of the Wildcats’ lineup after the Sun Devils took a 6-5 lead in the top of the inning, but when he issued back-to-back walks to begin the bottom of the eighth, Bloomquist pulled him in favor of Peery.

After a sacrifice bunt and intentional walk loaded the bases with one out, Peery got pinch-hitter Tyler Casagrande to pop out on the first pitch. But Mac Bingham, the Wildcats’ No. 9 hitter, launched a bases-clearing triple over sophomore Joe Lampe’s head in center field, giving Arizona a lead that it would not relinquish as the Wildcats eliminated their arch-rivals.

“Disappointed, but proud,” Lampe said. “Our team grew a lot during the season. We had a lot of injuries, a lot of ups and downs.”

Injuries hampered the Sun Devils’ already-thin pitching staff as well as the middle of their lineup all season long. Sophomore Tyler Meyer emerged as a valuable member of the starting rotation, then only made one appearance across the entire month of April due to a shoulder issue. Senior Boyd Vander Kooi returned to the mound after Tommy John Surgery in 2021 but was limited to reliever and opener duties when healthy, a far cry from the innings-eating stalwart he had been before his surgery.

“It felt like we got kicked in the stomach,” Bloomquist said. “It seems like a lot of adversity, a lot of things went against us. But these guys kept on grinding and kept battling. So that’s a tribute to them, and the hard work they’ve put in and their mentality, their mindset. I expect that to continue here.”

The left side of the Sun Devils’ opening-day infield, sophomore third baseman Ethan Long and shortstop Hunter Haas, missed large chunks of the season with wrist and shoulder injuries, respectively. Long, considered one of the team’s best pure hitters, made just one appearance in the starting lineup after April 23. That same day, senior first baseman Conor Davis pulled his hamstring during a game against Arizona in Tucson. Though he played through the injury for the remainder of the season, Davis was limited in the field and at the plate.

“Ethan going down obviously stings,” Bloomquist said on Friday. “That’s a big bat in our lineup… So is Conor, limping around with the hamstring most of the latter part of the year. That being said, other guys had to step up, and for the freshmen that got the opportunity, this is big for them.”

Ryan Campos made the most of that opportunity. After beginning his first collegiate season as a backup catcher and occasional pinch-hitter, the freshman broke out early in conference play with a three-hit game against Washington on March 27. By the end of the year, he was the Sun Devils’ everyday starting catcher and their No. 3 hitter. He showed why against Arizona on Friday, going 3 for 4 with four RBIs including a clutch two-run double in the seventh to give ASU a 6-5 lead.

“You just saw him every day getting better,” Bloomquist said. “It seemed like when he first played early in the year and kind of tried to figure out his way a little bit, (he was) maybe a little timid. And then he was arguably the best player on the field today. He continues to get better. He’s mature well beyond his years.”

Bloomquist also credited Lampe with helping mentor Campos amid Lampe’s own breakout season. The Sun Devils’ leadoff hitter hit 12 home runs and stole 17 bases, both team highs. He will likely enter the 2022 MLB draft as one of the team’s top prospects, and has repeatedly heaped praise on Bloomquist and the new coaching staff for both helping his transformation and reinventing the team’s overall culture as well.

“It’s night and day compared to last year, in my opinion, just from a culture standpoint,” Lampe said. “Just changing that mentality to kind of the old ASU way. … We want guys that want to play baseball, we want guys that are willing to battle through injuries, bounce through a little soreness, and lay it all on the line for the team. So just from that perspective, I saw a lot of evolution throughout the season, especially towards the end.”

Lampe was not the only one who seemed to thrive in that transformed culture. Sophomore Sean McLain moved from second base to shortstop after Haas went down and excelled there for most of the year. Sophomore Nate Baez, the team’s starting catcher to begin the year, moved around the diamond to accommodate Campos, logging time at third base and both corner outfield spots before entrenching himself at second base late in the season. Baez also became the team’s hottest hitter down the stretch and won Pac-12 Player of the Week for his efforts on May 9, as did McLain on April 18.

Kyle Luckham, a junior transfer pitcher from Cal State Fullerton, blossomed into the ace of a pitching staff that desperately needed one. He led the team in ERA and tossed six innings of two-run ball against Stanford’s powerful lineup on Wednesday in his final start of the year. Murphy, who emerged from an early-season slump to provide the Sun Devils with some much-needed consistency at the bottom of the batting order, had the most memorable ASU moment of the Pac-12 tournament with his two-run, go-ahead home run in the sixth inning to help beat Oregon on Thursday.

That ability to respond to adversity is what Bloomquist hopes stays with the 2022 Sun Devils players going forward, regardless of whether their days of playing in maroon and gold are over.

“Keep grinding and never give in,” Bloomquist said, “because good things can happen as long as you keep battling. And I think that’s a good lesson in life, or baseball or whatever industry you’re in. It’s pretty easy to tuck your tail and run when when adversity hits. But it’s those guys that keep pushing forward and keep grinding through it are the ones that build the character. And those are the kinds of guys you want around this program.”

With the win over the Sun Devils on Friday, Arizona advanced to face Stanford in the Pac-12 tournament semifinals on Saturday morning. Wildcats star sophomore catcher Daniel Susac exited early from Friday’s game with what coach Chip Hale said was due to a non-COVID-19-related illness, but returned to the lineup on Saturday.