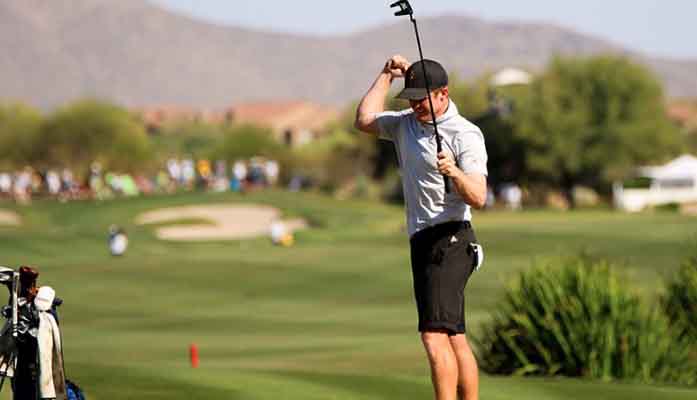 SCOTTSDALE – The high stakes that come with playing in a championship evoke a wide range of emotions. That was evident Wednesday in the face of Arizona State senior Cameron Sisk.

During the final day of the Division I men’s golf championship, he was tearful after the Longhorns defeated Arizona State 3-2 in the title match at Grayhawk Golf Club. Yet days earlier, he finished stroke play tied for fifth in a tournament that featured 155 golfers.

On Wednesday, Sisk was the last of the Sun Devils to tee off, facing the Longhorns’ Travis Vick.

Sisk faced tough competition all day, and at one point was down three. However, at 17 he had a chance to tie and send it squared to the last pin of the course. But the ball fell just 2 inches short of a celebration.

At 18, Vick secured the victory by tying the hole, and Texas achieved its fourth title in program history.

Sisk was one of three seniors who competed in Wednesday’s final, together with James Leow and Mason Andersen, who dominated his match against Cole Hammer over 16 holes, 3&2.

“It’s a good run. It’s a good run,” Andersen said. “But it’s tough to get that close. Because it’s a lot of work. I mean, I feel like I’ve been at this course for a month now, it’s a marathon.”

It was the last collegiate tournament ever for the fifth-year senior, and he delivered by winning three times in match play against Oklahoma, Pepperdine and Texas.

The other ASU golfer to record a victory Wednesday was David Puig. He was locked in Tuesday, committing to the Spanish saying, “Las finales no se juegan, se ganan.” (You don’t play finals, you win finals.) He showed that conviction during his match against Mason Nome.

It was a bittersweet victory for the Spaniard.

Puig took advantage of a missed putt by Nome on 17 to tie it up, and both players tied at 18 to force a playoff at 10.

Things looked promising for the junior from La Garriga, a small town 25 miles fom Barcelona, after his rival sank his ball in the water trying to hit the green. With a strong chance of winning, Puig was ready to putt, but at the moment he was executing, roars from Texas fans at 18 could be heard.

Nome, who had lost his match, raised his arms up, knowing he had just become a national champion despite losing his match. On the other side, a disappointed Puig was embraced by Ballester and Preston Summerhays. 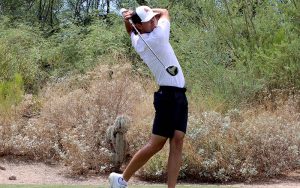 Freshman Summerhays was the other ASU golfer to lose his match, to Pierceson Coody, despite battling to a tie until he lost at 17.

“Golf-wise, I feel like I’ve kind of gotten over it,” Summerhays said. “You know, kind of with the seniors leaving, we had such a good relationship with them. They’ve been great to me, so kind of seeing the seniors go makes me emotional. But yeah, it hurts to lose, especially at this stage. But you know, it’s sport, it’s golf.”

Emotions were the main topic at the end of the final, especially for ASU coach Matt Thurmond.

For Thurmond, seeing them lose and come up short was a tough feeling, but also knowing they will hold a different place in ASU sports lore.

“When you win something like that, it’s forever part of history, and you have reunions and … they celebrate you 25 years from now at a football game and they all come into town and share the suite together,” Thurmond said. “And when you’re runner-up, you don’t get any of that. And this team deserves that.”

ASU hopes to learn from the experience and aim for a championship next season. The loss could serve as the foundation for another run like this, especially since the scenery will be the same. The event returns to Grayhawk Golf Club.

“I don’t know if we’ll ever be back here. I think we will,” Thurmond said. “We have great recruits coming in, the guys that will be back next year gained really valuable experience. I thought there’s no way we make it to the final this year without the experience we had last year.”

Summerhays also believes the loss will serve as motivation.

“It’s definitely gonna piss us off,” he said. “You know, we’re not satisfied with (the result) and we’re gonna have a good team next year. We’re going to be back here at Grayhawk. We have something to work towards. We’re going to try as hard as we can to get to the same position next year.”

As the minutes passed, the Sun Devils tried to forget the loss, and took time to take pictures with their coach and the runner-up trophy, and to acknowledge an accomplishment they will appreciate in the future.