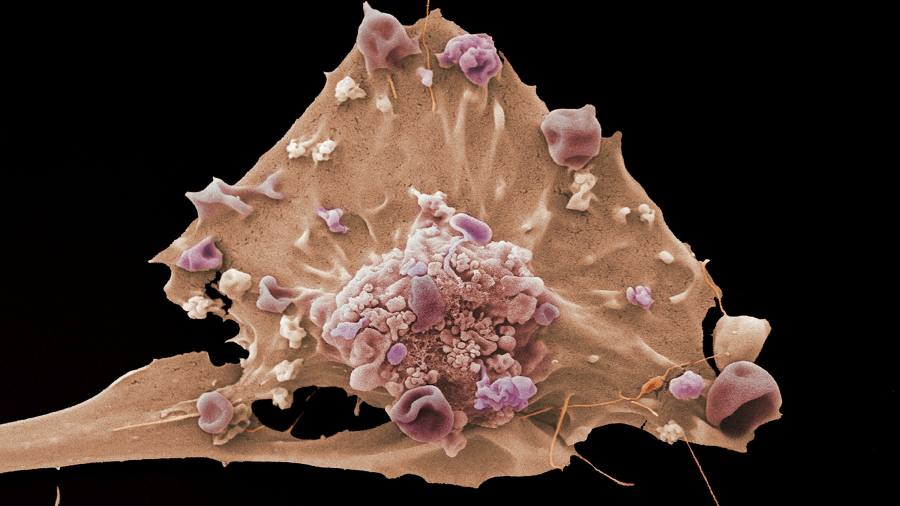 Oncologists are hopeful a drug developed by AstraZeneca and Daiichi Sankyo will change how doctors treat the most common type of late-stage breast cancer, after data showed it doubled the progression-free survival rates of patients compared with chemotherapy.

Research presented at the world’s largest cancer research conference on Sunday demonstrated that Enhertu — an antibody treatment targeting cancers linked to a protein called HER2 — also significantly improved the overall survival rates of patients when the disease had spread throughout their bodies.

It marks the first time such a targeted therapy has improved survival rates in patients suffering from HER2-low metastatic breast cancer, a category that covers up to half of all late-stage breast cancer patients.

Jane Lowe Meisel, a cancer expert at the American Society of Clinical Oncology, said the results presented at the organisation’s annual meeting would “redefine” how doctors classify breast cancer and significantly expand the population of patients who could benefit from drugs targeting the HER2 protein.

The clinical trial of more than 550 patients found those using the drug had a 49 per cent reduction in risk of the cancer progressing and a 36 per cent reduction in risk of death compared to those who received the standard form of chemotherapy treatment. It recorded progression-free survival, the time during which the tumour was stable or shrank, of 10.1 months with Enhertu, compared with 5.4 months for those who received chemotherapy.

Both companies told the Financial Times they would use the trial results — due to be published in the New England Journal of Medicine — to seek approval from global regulators to target this new category of breast cancer patients with Enhertu.

“This is not only a breakthrough, it is practice-changing,” said Gilles Gallant, Daiichi’s global head of oncology development.

He said Daiichi was conducting studies on early-stage breast cancer patients to see if Enhertu is more effective than existing treatments and whether it could in the future cure the disease.

Enhertu is the brand name of the antibody drug conjugate trastuzumab deruxtecan, which AstraZenca and the Japanese company Daiichi are developing to treat cancers that express HER2 — a protein that helps cancer cells grow. It is a targeted treatment that is designed to deliver a payload of chemotherapy to shrink cancer cells while limiting the damage to healthy cells.

The treatment has already been approved by the US Food and Drug Administration for a smaller group of late-stage breast cancer patients with tumours, which express high levels of the HER2 protein. But the trial found Enhertu also worked against a much larger cohort of tumours that express low levels of HER2.

Existing cancer drugs, such as Roche’s Herceptin, have so far only shown benefits against the minority of tumours that produce large amounts of the HER2 protein, leaving most late-stage breast cancer patients reliant on chemotherapy to slow the progression of their disease.

Enhertu is already approved to treat certain types of gastric cancer in the US and has shown promise in treating some lung cancers.

David Fredrickson, AstraZeneca’s executive vice-president of oncology, said Enhertu had the potential to become a “multi-blockbuster” medicine by being transformative in treating different types of breast cancer, as well as types of gastric, colon and lung cancers.

He said Enhertu could become an available treatment for HER2-low breast cancer patients within months following talks with regulators.

Analysts said the trial results would probably accelerate Enhertu’s transformation into a blockbuster cancer drug, which could earn several billions of dollars a year in peak sales.

Global sales of Enhertu outside the Japanese market were worth $426mn in 2021, according to AstraZeneca.

Tara Hansen, a consultant at Informa Pharma Custom Intelligence, said the trial results were “groundbreaking” and would position Enhertu as a competitive option in a patient population with a high unmet need. She said the results would lead to an increase in the forecast peak annual sales for Enhertu, which are currently at just under $3bn in 2030.

Breast cancer recently overtook lung cancer to become the world’s most commonly diagnosed cancer. Every year more than 255,000 cases of breast cancer are diagnosed in the US.