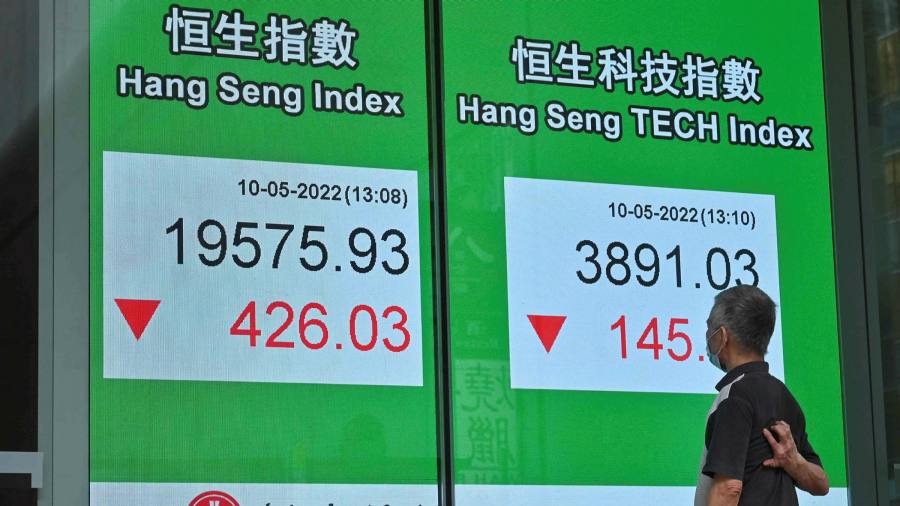 Asian shares declined and European stock futures fell in early trading on Thursday after Wall Street equities suffered their worst day since the early in the pandemic due to worrying new signs of faltering economic growth.

The falls followed a 4 per cent drop in the US S&P 500 share index on Wednesday, the biggest one-day drop since June 2020, with 98 per cent of the stocks included in the benchmark slipping.

The sharp fall was triggered by mounting concern that inflation is undercutting global growth after weak results from consumer bellwethers underscored how higher prices were hitting both retail spending and corporate profits.

The US retailer Target led the declines, plunging 25 per cent having warned that its profit margins were under pressure the day after its larger rival Walmart issued a similar alert. Both retailers have notched their worst daily stock falls since 1987 this week.

In Europe stock futures pointed to falls when local markets opened, with those tracking London’s FTSE 100 and Euro Stoxx 50 down 0.6 per cent and 1 per cent, respectively.

Hong Kong-listed shares in Chinese internet group Tencent fell as much as 8.6 per cent, helping to drag the Hang Seng Tech index down 3.6 per cent and the broader Hang Seng index 2.4 per cent lower. Elsewhere in the region, Japan’s Topix and South Korea’s Kospi both fell about 1.5 per cent.

Tencent’s falls came after the Chinese internet group reported its slowest revenue growth on record. The company recorded a 51 per cent fall in profits in the first quarter due to Beijing’s crackdown on the tech sector and the impact of harsh Covid-19 lockdowns on consumer spending.

Charlie Chai, an analyst with 86Research, said Tencent’s “fairly underwhelming” results in gaming, advertising and new business services were “a reflection of the big picture [in China]” as a downswing in business confidence translates into reduced corporate spending.

With China’s economic outlook worsening, Standard Chartered cut its annual growth forecast for the world’s second-largest economy to 4.1 per cent from 5 per cent. Shares in US tech groups also suffered on Wednesday, with Apple, Nvidia and Amazon all dropping more than 5 per cent while the Nasdaq Composite index closed down 4.7 per cent.