As Its President Fights Covid in the Hospital, a Campus Prays for Healing 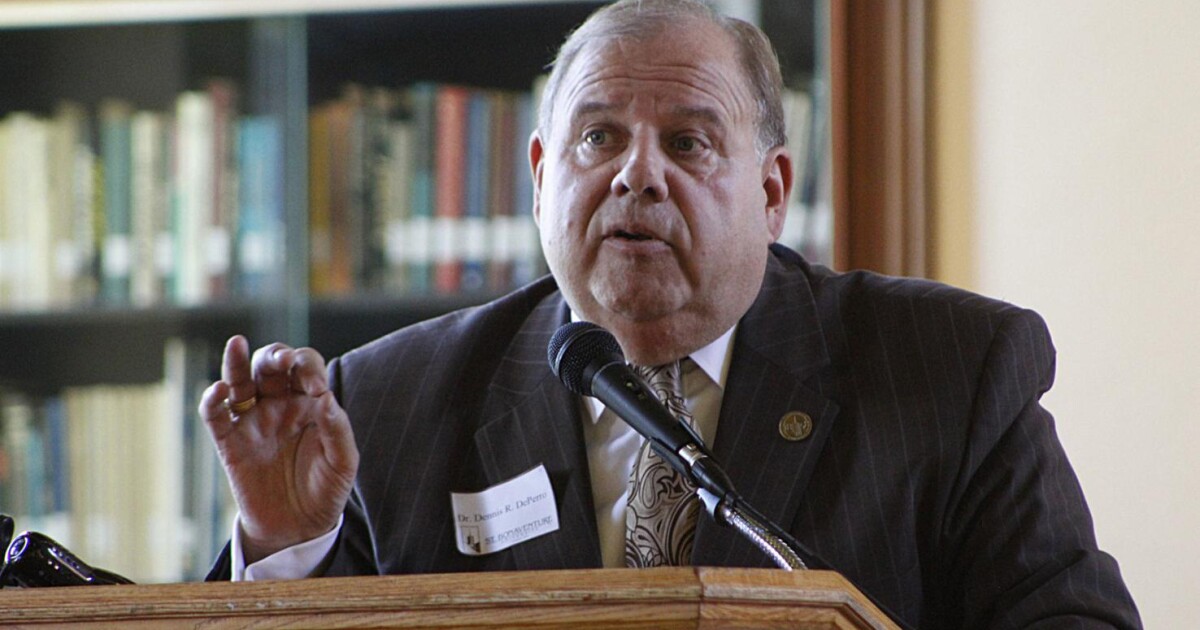 On Wednesday night, the Rev. Gregory Jakubowicz, the chaplain at St. Bonaventure University, welcomed his guests to the university chapel. He stood in front of a mural depicting St. Francis’ vision of an angel appearing as Christ risen after his crucifixion, and he looked into a camera. Well over 600 people assembled on Zoom looked back at him.

At Jakubowicz’s direction, they prayed — alone, separately — for St. Bonaventure’s president, Dennis R. DePerro, who was on a ventilator fighting coronavirus.

“Christ taught his disciples to be a community of love,” the chaplain opened.

At its best, a campus like St. Bonaventure can feel like such a community. The roughly 2,000-student Franciscan university in western New York didn’t want to lose that feeling, so in the fall, as some other colleges operated remotely, its leaders decided to open in person.

The campus has a lot of square footage and the student population is relatively small, so social distancing was not a problem. Art galleries and a theater were turned into classrooms, and faculty members were hooked up to mini-microphones that projected their lectures on Bluetooth speakers. Some students worried that there wasn’t enough Covid-19 testing being done, but positive cases remained relatively low. Until the last week of the semester, when cases ticked up to about 100, and the university closed a few days early to avoid a bigger outbreak.

Before the pandemic, people had started feeling better about their university. DePerro, now in his fourth year at St. Bonaventure, is a popular president. “We’re still totally in the honeymoon period,” said Anne Foerst, the Faculty Senate chair. She praised DePerro for his willingness to work with faculty members and said that since his arrival, enrollment has gone up.

When DePerro started, the university was already implementing a plan to add more master’s-degree programs in health sciences. David B. Couturier, a professor of theology and Franciscan studies, said he helped create that plan and was impressed that DePerro didn’t get in the way of it, but supported it.

“The sign of a good leader is trust and integrity,” said Couturier, who teaches ethical leadership. As for DePerro, “He’s got it.”

That is, in part, why the news over winter break was so devastating: DePerro had tested positive for Covid-19 on Christmas Eve. He was hospitalized in Syracuse after developing pneumonia as a result of the virus, but was quoted in a January 2 press release saying he was starting to feel better. There wasn’t much other information, but that made sense to people; the president and his family deserved their privacy.

Like a lot of colleges, St. Bonaventure pushed back the spring-semester start date. On January 25, classes started again.

On that Monday, Grace J. Wroblewski, a senior philosophy major, was in her apartment off campus with her roommates when an update about the president landed in their inboxes. The news was grim: DePerro was still in the hospital, and now he was on a ventilator.

“The three of us looked at each other like, What is going on?” Wroblewski said. “It’s pretty shocking news.”

The email also said that Joseph Zimmer, the provost, was named acting president. He’d been working informally in that role for a few weeks, but the board of trustees had decided to make it official “to allow Dr. DePerro the opportunity to focus completely on his health and making a full recovery,” the press release said.

Zimmer has worked at St. Bonaventure for almost 29 years. He’s worked there with seven different presidents. He said he and DePerro get along well.

“He is quite a talker,” Zimmer said. “So I have a pretty good idea of what he thinks about any issues that are coming up. There’s not so many so far.” Wroblewski agreed that the semester was going smoothly.

Zimmer described what he sees as the St. Bonaventure experience. It came back to community.

That magic can come less naturally when interactions happen in pixels and not in person. But organizers of the virtual prayer service for DePerro — who remains on a ventilator — hoped to foster some of that sense of community.

After he said his opening prayer, Jakubowicz read a passage from the Gospel of Mark — the one right after Jesus has just walked on water. He comes ashore, and people gather the sick and lay them out for him to heal. They hope to touch even just the edge of his cloak.

On Wednesday night, that sort of hope resided in prayer. “Since this pandemic has begun, we’ve all been praying,” the chaplain said. Not just for DePerro, his wife, and children, but for “all,” he said, “who we hold in love that need healing.”