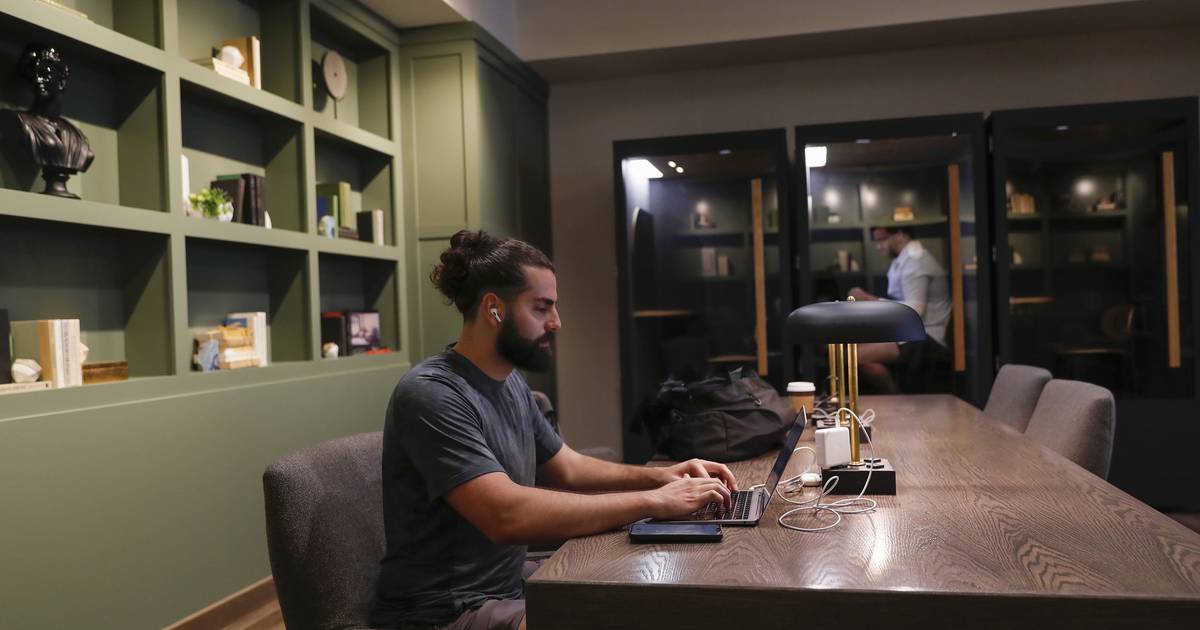 With Chicago office vacancy rates at an all-time high and companies tentatively beginning to herd employees back into communal settings, co-working spaces — hard hit during the pandemic — are making a comeback.

Two major co-working spaces opened this month in Chicago, including an expansive Fulton Market location from the once high-flying WeWork, and a new entry from Minnesota-based fitness chain Life Time, which launched a 39,000-square-foot space adjacent to its recently opened athletic club in River North.

“Co-working is here to stay, and many of the entities that survived the pandemic are doing well or starting to recover,” said Bob Chodos, vice chairman at the Chicago office of Newmark, a real estate services company.

A pre-pandemic boom that flooded the market with major national players such as WeWork, Industrious and Novel, downtown Chicago had 94 co-working spaces occupying about 3.4 million square feet at the end of 2019, according to a Newmark study. WeWork became the largest office tenant in Chicago. Projections for growth were robust. Then the pandemic hit.

Expansion halted, some spaces closed and co-working in Chicago, like the broader office market, went into stasis, as employees began sharing spaces with their children, pets and significant others in makeshift home offices.

More than 1 in 5 co-working spaces permanently closed across North America during the pandemic, according to a study by Upsuite, a co-working marketplace. The rate was even higher in Chicago and the suburbs, where 47 out of 206 co-working spaces closed, or nearly 23%.

The traditional Chicago office market remains in a deep, pandemic-driven slump, with companies continuing to shed space as long-term leases come up for renewal, Chodos said. For the first quarter, the central business district had an 18.9% vacancy rate, while Chicago metro was at 21.3%, both records, according to a Newmark report.

But demand for flexible co-working space is on the rise as remote employees resist a return to the five-days-a-week commuting grind and companies adjust to some form of hybrid working amid lingering pandemic uncertainty.

“The flex office market kind of led the traditional office market that relies on long-term leases, into a real downturn, but it’s also leading it out,” said Ben Wright, head of flexible office solutions for New York-based SquareFoot — a commercial real estate brokerage that owns Upsuite.

The co-working model leverages long-term leases on collective office space and sells access to everything from rotating desks to dedicated group offices and conference rooms. Add in amenities such as Wi-Fi, printers, coffee bars and pingpong tables, and you have an instant office for individuals, startups and established companies that need extra space.

Memberships can be purchased daily, monthly or annually, affording flexibility and allowing companies to avoid long-term leases, something that may prove more valuable in the wake of the pandemic, when remote working turned downtown Chicago into a ghost town for the better part of two years.

Chodos said more and more established companies are willing to pay a premium for that flexibility, incorporating co-working spaces — once the domain of freelancers and startups — to help with the “accordion of utilization” as employees transition back to an office.

“The price you pay for flexibility is in per-seat costs much higher than the cost it takes for you to put the space in place for yourself,” Chodos said.

Chicago is the fifth largest co-working market in the nation, behind New York, Los Angeles, Houston, and Washington, D.C., with 43,199 seats for lease in the city and suburbs, according to Wright.

The inventory of co-working desks went up this month with new spaces from WeWork and Life Time Work.

Life Time, a national fitness chain with 11 locations in suburban Chicago, opened a 126,000-square-foot athletic club at the new One Chicago residential tower in River North in January. It opened an adjacent Life Time Work co-working space earlier this month, its first in the Chicago area.

In late 2018, the company launched Life Time Work in suburban Philadelphia, and now has nine co-working locations. The decision to merge play and work was inspired by the explosive pre-pandemic growth of the co-working industry, and the nonathletic pursuits of Life Time members already hanging out in the club’s lobby and coffee bar.

“We observed that people were working on their laptops in our spaces more and more regularly,” said James O’Reilly, president of Life Time Work. “That was the kind of nudge that we needed to say ‘Hey, our members are demonstrating a use case that we hadn’t previously considered.’ ”

Where Life Time Work sets itself apart from the co-working competition are the health club amenities, included as part of the membership. Instead of a pool table, think rooftop pool, basketball court, exercise classes and a spa.

Launched in 2010, New York-based WeWork became the poster child for the co-working boom, building a massive national portfolio and speculative valuation. By June 2019, WeWork had grown into the largest office tenant in Chicago, leasing more than 1 million square feet in 12 buildings.

Three months later, WeWork suffered an epic, potentially existential fall from grace. In September 2019, WeWork’s planned initial public offering imploded amid concerns about corporate governance and the path to profitability. Charismatic co-founder Adam Neumann was forced out, the IPO was shelved and the company was bailed out and taken over by SoftBank, whose previous investment had pushed WeWork’s valuation to $47 billion.

“We started a review of our overall global real estate portfolio,” said Errol Williams, Atlanta-based senior vice president of community and asset management for WeWork. “We exited a number of buildings, including three in Chicago.”

Like other co-working companies, WeWork saw empty desks and falling revenue at the onset of COVID-19, as many members let their short-term leases expire and stayed home. But the flexibility of co-working has been a draw as workers begin returning to the office, Williams said.

“Obviously, the pandemic created some disruption,” Williams said. “It also created renewed interest in flexible working and hybrid space, which is the product that WeWork sells.”

WeWork went public through a special purpose acquisition company in October 2021, two years after its aborted IPO, creating a $9.5 billion market cap, or a fifth of the lofty 2019 valuation. But the company reported a narrowing loss in the first quarter of 2022, with desk occupancy increasing to 70% at 765 locations worldwide, up from 66% at the end of last year.

In Chicago, WeWork has 11 co-working spaces covering more than 922,000 square feet, including two new locations this year. In addition to a 93,500-square-foot space opened earlier this month on two floors at 167 N. Green St. in Fulton Market, the company christened a 62,000-square-foot River North space at 448 N. LaSalle St. in January.

While Williams declined to disclose Chicago occupancy, he said WeWork is focused on “filling the space and continuing to welcome back those who are returning to the office.”

WeWork offers individual all-access memberships at $299 per month, and on-demand access starting at $29 per day and $10 per hour for conference rooms. Monthly bookings in Chicago are up 25% while on-demand bookings are up 52% month-over-month through April this year, the company said.

The company has dedicated one floor at its new Fulton location for individual members and one floor for small- and medium-size businesses, reflecting a growing interest among companies to seek flexible workspace in the post-pandemic hybrid world, Williams said.

“You have some companies that are taking full floors,” Williams said. “Some companies take smaller offices and pair it with our all access product. Whether you’re a large company or small company, the idea is flexibility.”

Supply is also down in downtown Chicago, where 94 co-working locations pre-pandemic have been reduced to 69 locations covering 2.7 million square feet as of May, Newmark reported.

But across the Chicago area, the co-working count is up to 199 locations, with more total seats than pre-pandemic, Wright said. Some industry analysts see suburbia as the new frontier in co-working — where the home office is increasingly a suburban home for many employees.

Life Time, which primarily built its health club chain in the suburbs across the U.S., has similarly targeted the suburbs for its nascent co-working spaces in other markets. With Life Time planning to open its 12th Chicago-area health club in Lake Zurich this summer, the suburbs may be fertile ground for co-working expansion here as well, O’Reilly said.

“Life Time, as a company, as a brand, we really understand the suburbs are dramatically underserved for contemporary co-working offerings,” O’Reilly said. “We will absolutely be doing more Life Time Work locations in and around Chicago.”

The rise of co-working doesn’t necessarily sound the death knell for the traditional Chicago office market, Chodos said. But hybrid working may create lower demand for some time, with landlords offering more flexible leases and companies rolling out more attractive amenities to make the spaces “commute-worthy” for employees.

Longer term, he expects office space to return to pre-pandemic levels of occupancy, as face time morphs back from an app to an in-person activity — at least a few days a week. How much of that space will be occupied by co-working locations remains to be seen.

“You’re going to see a transition happen where people are going to be working in places that they haven’t historically worked,” Chodos said. “And companies are going to have to adapt to that. There’s going to be a lot of pieces on the chessboard moving around at the end of the day. And when it all stabilizes out, that will be the new way of working.”