As a high school basketball team kneeled for anthem, announcers used racial slurs to describe them 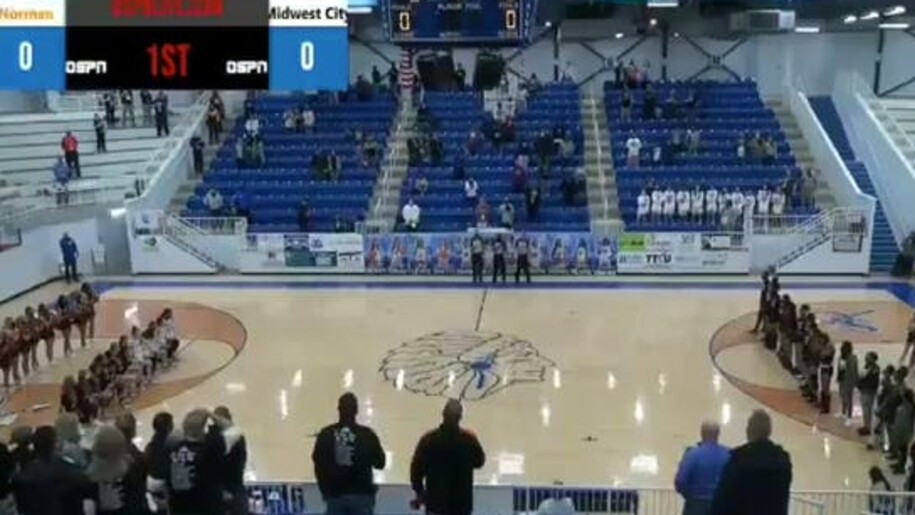 every knee shall bow and every tongue shall confess. disgusting. and people want to know why we kneel. here’s a prime example of why we do it. i’m proud of my team and i for using our voices and being heard. I love my girls & let’s finish. #MORETHANANATHLETE https://t.co/K8AX2xCSCa

In response to the incident, multiple members of the team, the school’s athletic director T.D. O’Hara, and its leadership teacher have tweeted out a graphic with the words “THIS IS WHY WE KNEEL.”

Students are using the incident as a chance to spread awareness of racism.

Disrespectful and disgusting. This is why we kneel. I love my sisters, and this makes us that much stronger. You are part of the problem. https://t.co/uxUtbXCqYS

According to ABC News affiliate WFAA, announcers for the NFHS broadcast were contracted by the Oklahoma Secondary School Activities Association (OSSAA). While both have not yet been identified, multiple sources have identified one announcer as Scott Sapulpa, The Oklahoman reported. Sapulpa is listed as the head high school football coach at Hulbert, a school in northeast Oklahoma. Calls to hold him, the other announcer, and the association accountable have ensued.

The network issued a statement Friday noting that it is “aggressively investigating” the incident and “condemns racism, hate, and discrimination.” The NFHS streams high school games not only in Oklahoma but around the country, so such behavior is unacceptable and a statement issuing an apology is not enough.

“We condemn and will not tolerate the disgusting words and attitudes of these announcers,” Migliorino said in a statement. “This type of hate speech has no place in our society and we are outraged that it would be directed at any human being, and particularly at our students.”

“We fully support our students’ right to freedom of expression and our immediate focus is to support these girls and their coaches and families, particularly our Black students and coaching staff. It is tragic that the hard work and skill of this team is being overshadowed by the vile, malignant words of these individuals. We will do everything in our power to support and uplift our team and everyone affected by this incident.”

Additionally, Norman mayor Breea Clark also tweeted about the incident Friday, saying she was “livid and absolutely disgusted with the broadcaster’s “racist and hateful comments” and plans to schedule a “listening session town hall” to hear how this incident has impacted the youth of the city in efforts to learn how the community can be improved. She also called for OSSAA to end their contract with NFHS Network.

“(NFHS) employees do not need to be anywhere near children,” Clark’s tweet read. “Further, these young women & their team deserve a public apology from NFHS and OSSAA. There is NO PLACE for this behavior in our nation, & certainly not in youth sports.”

Despite the announcers’ racist slurs and hopes the team would lose, Norman defeated Midwest City 53-40 and advanced to Friday’s state semifinals game against Union!