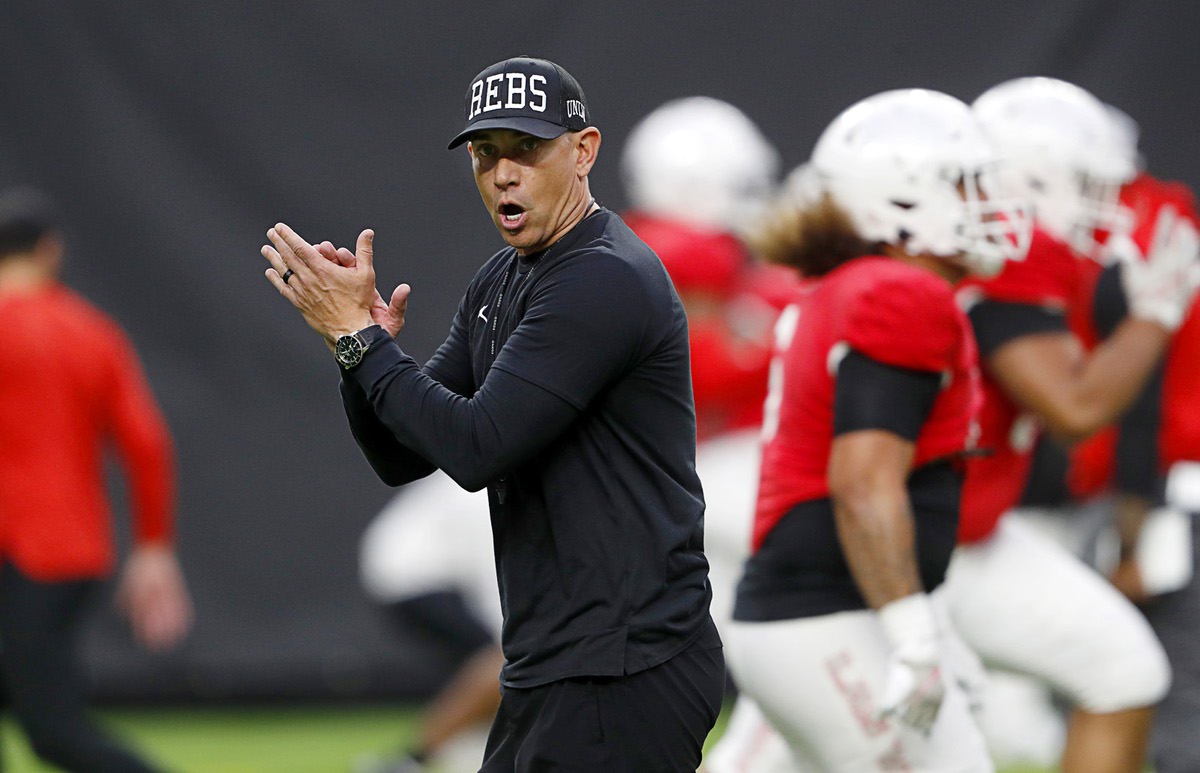 Marcus Arroyo appears to have hit it big with last year’s recruiting class.

In his second offseason as the head coach at UNLV, Arroyo attacked the recruiting trail and built an incoming group that ranked No. 3 in the Mountain West according to 247Sports and measured as one of the program’s best classes in recent memory. And the results have been immediate.

Quarterback Cameron Friel stepped in as the starter last year and eventually earned Mountain West Freshman of the Year honors. Johnathan Baldwin flashed in coverage and is projected to start at safety as a sophomore this season. And Cameron Oliver is firmly in the cornerback rotation after starting 11 of 12 games as a true frosh.

That’s a pretty good haul. And yet, there’s still a nagging feeling that the Class of 2021 could be more productive, mostly because the team’s two highest-rated recruits from last year have yet to deliver on the field.

When the class signed, there was no doubt as to who the headliners were. Nick Dimitris was not only the top-rated recruit in the group — the three-star defensive lineman from California checked in as the fifth-highest ranked recruit for UNLV over the last two decades.

The next-highest rated prospect in the class was three-star offensive lineman Anthony Rosas, a teammate of Dimitris at Sierra Vista High.

Together, Dimitris and Rosas are supposed to be serving as long-term building blocks in the trenches for Arroyo’s up-and-coming program. But as the midway point of their second training camp approaches, their contributions have so far been minimal. Dimitris battled a foot injury in 2021 and appeared in just one game. Rosas didn’t see the field at all. Both ultimately redshirted and are listed as freshmen this year.

Arroyo is still determined to unlock their potential, but it might require patience.

“They’ve done a good job in the offseason learning about the [playbook] and getting their bodies right to be able to endure that position,” Arroyo said. “I think that takes time.”

The most obvious reason for the slow start to their careers is physical. Defensive tackle and offensive line are two positions that demand mature bodies — baby fat has to go, and it has to be replaced with grown-man muscle. Dimitris and Rosas are still working on that.

Redshirting last year has given both players a chance to work on their bodies, but their development is an ongoing process.

“With both Anthony and Nick, offensive and D-line, respectively, those are developmental positions, and they take a lot,” Arroyo said. “First of all, just size and growth. Playing inside is a big deal. The transition from high school into college — even just the first year in training camp and coming in and getting in redshirt form — there’s still a gap there that they’ve got to close, because it’s a violent sport up there.”

Dimitris has been running with the second-team defensive tackles in training camp.

“Nick’s got some definite material and some traits that we really like,” Arroyo said. “He’s done a good job putting some weight on and working hard in the offseason. You can see that in his body. He’s a big guy who’s long. We’re excited about him progressing with that group.”

Rosas has mostly mixed in with the third-string blockers in camp as he tries to crack a rotation that is loaded with veterans. Projected starters Daviyon McDaniel (left tackle), D.J. Stuckey (left guard) and Amani Trigg-Wright (right guard) are seniors, while Leif Fautanu (center) is a redshirt junior. Right tackle Tiger Shanks is a sophomore, but the rest of the crew all has at least four years of college experience.

McDaniel and Stuckey are transfers (Charleston Southern and Cal Poly, respectively), which adds another layer to Rosas’s uphill battle for snaps. Veterans are plentiful in the transfer portal and eligible to play immediately, which gives coaches an alternative to turning over significant playing time to an unproven youngster.

And in a training camp battle, experience is a valuable asset. That’s also in play along the interior defensive line, where Dimitris is competing with senior juco transfer Darius Johnson for snaps.

Arroyo said he doesn’t recruit the portal specifically to plug holes with veteran players, but addresses it on a case-by-case basis.

“Whether we’re recruiting from the portal or high school, it all depends on what our needs are,” Arroyo said. “What do we need? And if we need some maturity and we need some instant impact, then yeah, there’s some times when we can bring in a guy like Darius who’s got some playing experience. We see his size, see his growth potential, and we can infuse him right away. There’s other guys down the road that are developmental guys.”

UNLV did not make Dimitris or Rosas available for interview, but linebacker Kyle Beaudry said the transition from high school to a Division I program is as much about mental toughness as it is about physical ability.

“With Nick or with a lot of guys that come in, everyone’s got stars and rankings,” Beaudry said. “Once you get to the college level you kind of realize that everyone else is also really good. It’s not like high school where you might be the best guy on your squad; everyone else is here on scholarship or earned a spot here.”

Beaudry would know something about earning a spot. The Liberty High product played sparingly his first two years, became a part-time starter as a junior and is now serving as a team captain for the 2022 season.

He said the difference between an ultrasimplified high-school playbook and an extremely technical college system can be staggering, and it can take a player years to internalize his assignments.

Beaudry said Dimitris has been putting in the work to learn the defense.

“Nick, he’s working hard,” Beaudry said. “With all the young guys, learning the playbook is a big thing for them. When you’re coming out of high school it’s a lot different. In high school they tell you drop in the flat or go rush the passer. In college it’s completely different, so with a lot of the young guys it’s learning the playbook. I think everyone is doing a really good job of buying in and that goes for Nick as well.”

Whether that work will translate into on-field production this year for Dimitris and Rosas, UNLV will just have to wait and see.

Study tries to see if child vaccines and asthma are linked