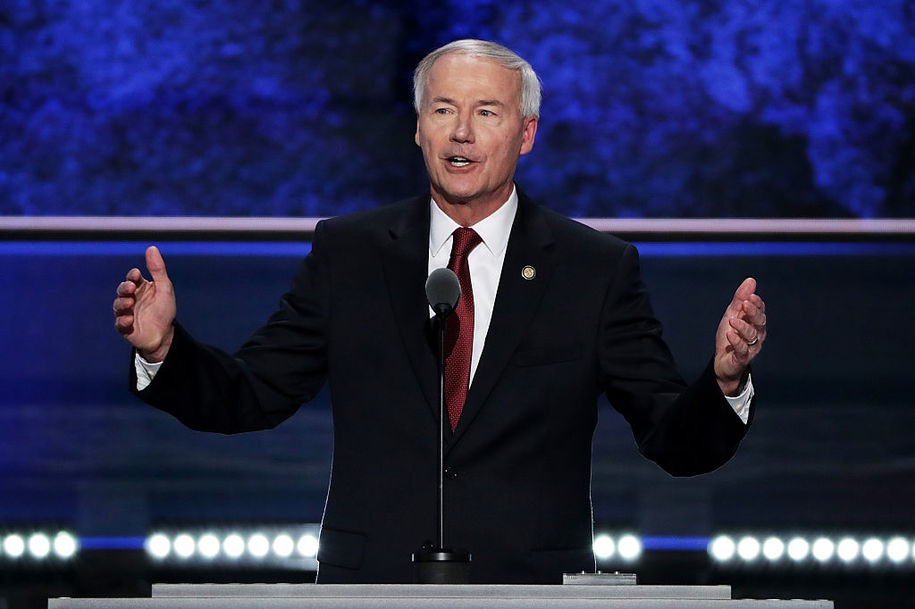 As a result, the 2nd District, which hosted competitive elections the last two cycles, would grow redder, shifting from a 53-44 win for Donald Trump to a 55-42 Trump victory, according to Dave’s Redistricting App. An analysis from the nonpartisan site PlanScore also shows an extremely heavy tilt toward Republicans for the map overall.

It’s not clear yet whether any litigants will take Hutchinson up on his suggestion, though the map won’t actually take effect for a few more weeks. The legislature is set to adjourn on Friday, and under state law, any unsigned bills would become law 20 days later, which would make the map’s likely effective date Nov. 4.​​

● CO Redistricting: Late on Tuesday, Colorado’s legislative redistricting commission gave approval to a new map for the state Senate after signing off on a state House map earlier in the day. Both plans will now be reviewed by the state Supreme Court, which has until Nov. 15 to either give its endorsement or instruct the commission to make further revisions. Separately on Tuesday, the justices heard oral arguments from those opposed to the state’s proposed congressional map, though several sounded skeptical about second-guessing it. At least one suggested that critics had not shown an “abuse of discretion” on the part of commissioners, the standard necessary for the court to order changes.

● IL Redistricting: Democrats in Illinois’ legislature released a proposed congressional map on Friday, an aggressive gerrymander that would aim to elect 14 Democrats and just three Republicans, up from the 13-5 advantage that Democrats currently enjoy (Illinois is losing a seat in reapportionment) . Despite its many snake-like districts, however, several districts would be tenuous for Democrats during strong GOP years, particularly the 3rd, 14th, and 17th. Democrats hold full control over state government and are likely to pass this map or something very close to it into law later this month.

● MI Redistricting: Michigan’s new independent redistricting commission voted to approve 10 draft maps on Monday afternoon, following a chaotic reversal that saw the board unexpectedly advance a single state Senate plan on Friday, then retract that vote Monday morning. The package includes three maps apiece for the state House and Senate and four proposals for Congress, though more maps from individual commissioners could join the pile. The panel will now hold a series of public town halls and must adopt new maps by Nov. 1.

● Oregon: Oregon Republicans have filed a lawsuit in state court aiming to invalidate the new congressional map that Democrats enacted last month. Republicans argue that the new map violates the Oregon constitution and state laws that require districts to be “connected by transportation links” and prohibit districts that are “drawn for the purpose of favoring any political party, incumbent legislator or other person.” Plaintiffs focus in particular on the 5th District, which stretches from southeastern Portland east of the Cascade mountains to Bend in central Oregon.

Democratic appointees hold every seat on Oregon’s Supreme Court in the event that the case reaches the justices, and it’s unclear whether Republicans stand much of a chance at overcoming a precedent from the 2000s round of redistricting. Two decades ago, Republicans similarly tried to challenge legislative districts drawn by Oregon’s then-Democratic secretary of state, but the state high court dismissed the GOP’s suit and set a high bar for relief by ruling:

“It may be true that, in some circumstances, this court could infer from a record that a Secretary of State had the purpose of favoring one particular political party over another. However, the mere fact that a particular reapportionment may result in a shift in political control of some legislative districts (assuming that every registered voter votes along party lines)—and that is all that petitioners point to on this record—falls short of demonstrating such a purpose. Petitioners have not met their burden of demonstrating that the Secretary of State had an improper purpose.”

● South Carolina: The ACLU and NAACP have filed a federal lawsuit asking the court to set a deadline for South Carolina’s Republican-run state government to draw new congressional and legislative districts. Plaintiffs further want the court to block new elections from taking place until judges sign off on any maps.

Republican legislative leaders have refused to call a special session this fall to draw new maps. The plaintiffs argue that there is no way for lawmakers to complete mapmaking with sufficient time before candidate filing begins on March 16 if they wait until the start of the next regular session in January. However, legislators could render the suit’s chief argument essentially moot by adjusting the filing deadline, something that happened in the 1990s round of redistricting.

● TX Redistricting: Texas’ Republican-run state Senate and a state House committee have both passed the GOP’s proposed gerrymander of the state’s congressional map, making what the Texas Tribune described as “minor tweaks” in some rural areas. The plan must still be approved by the full state House and GOP Gov. Greg Abbott.

In legislative redistricting, the GOP’s gerrymander of the state Senate districts also advanced out of House committee after the Senate previously passed its own map. The House further passed a new map for the lower chamber on a largely party-line vote Tuesday, with four Democrats from the Rio Grande Valley voting in favor of the GOP’s gerrymanders and two Republicans against. Earlier, lawmakers adopted several amendments that likewise were approved on a partisan basis. The map now goes to the state Senate.

● VA Redistricting: After an acrimonious Friday meeting that saw three members walk out, Virginia’s new redistricting commission failed to finish drawing new legislative maps by a key Sunday deadline, thereby handing the process over to the state Supreme Court. The panel said it would instead try to draft new congressional districts, which are due by Oct. 25.

Members of Virginia’s top court are chosen by a majority vote of both chambers of the legislature, and all seven were confirmed when Republicans held a majority. (Only South Carolina uses a similar process.) Two justices tend to lean to the left, though, likely giving conservatives a 5-2 majority. When the constitutional amendment to create the new commission was on the ballot last year, some Democrats expressed opposition precisely because they feared that the court could impose maps that favor the GOP.

● WV Redistricting: Lawmakers in West Virginia’s Republican-run legislature have passed a new congressional map, though given the state’s deep red lean and all-Republican delegation, partisan gerrymandering isn’t really at issue. The greater focus, rather, has been on which of the three Republican incumbents will be able to win one of just two new districts since the state lost a seat in reapportionment, a question we covered in depth in our other newsletter, the Morning Digest. The new map now goes to Republican Gov. Jim Justice for his signature, but it would be very surprising were he not to sign it into law, particularly since it only takes a simple majority to override a veto in West Virginia.

● Florida: A federal district court has declined to dismiss four lawsuits challenging a number of voting restrictions that Florida Republicans passed into law in May. The new law includes measures that:

The court’s rulings allowed the various challenges to proceed against all of the above provisions except for the restriction on turning in someone else’s mail ballot. The court held that the plaintiffs lacked standing to sue the defendants in question, who are the county election supervisors and GOP state officials, on the basis that state law doesn’t require them to record the identities of suspected violators and instead suggested that the proper defendants would be the state attorneys responsible for criminal prosecutions.

● Montana: State Democrats have filed a lawsuit in federal court over Montana Republicans’ new law that bans voter registration, education, and get-out-the-vote activities in public college campus buildings, arguing that the law unconstitutionally targets students by imposing the restrictions only on campuses and not other public buildings. Two separate state-level lawsuits were filed earlier this year over the restrictions, and a lower court in one of the two cases already temporarily blocked parts of the law that limit voter registration and turnout efforts while the matter proceeds.

US withdrawal from Afghanistan complete