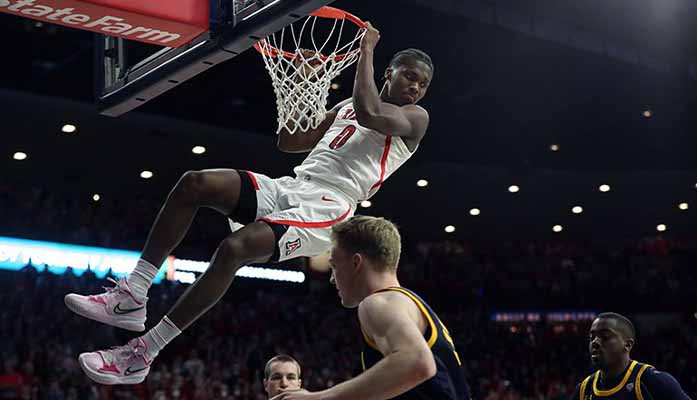 PHOENIX – If this season’s NBA MVP race sent one message, it was this: The impact of international basketball on the league is undeniable.

The 2022 NBA Draft, set for Thursday at the Barclays Center in Brooklyn, will also have an international flair. One potential top-five pick is Arizona’s Bennedict Mathurin, who grew up in Montreal.

“I think teams are seeing success,” said Chris Ebersole, the head of elite basketball development with the NBA. “I think the fact that we have such dynamic and impactful players at the very top of the NBA now from overseas shows that the game is global, and these international players are clearly here to stay.”

The NBA has made an effort in recent years to provide multiple camps and programs to help develop international talent, including the NBA Academy and, more specifically, Basketball Without Borders.

The latter is a global basketball development and community outreach program that the NBA and FIBA hold annually. The program, launched in 2001, has staged 62 camps in 39 cities across 30 countries and six continents. It has attracted more than 3,700 players from 133 countries.

“Seeing the best players from every country come to BWB Global in Chicago was fun,” Mathurin told NBA.com. “Every kid’s dream is to play in the NBA, and I got a preview of the players I will play against in the next couple of years.”

Mathurin and Koloko are among six international players on Arizona’s roster. Of those six, five have attended a BWB camp.

Seeking out international talent has been a priority for Arizona coach Tommy Lloyd, who served two decades under Gonzaga coach Mark Few and helped attract many of that program’s top overseas players.

In 2020, the Wildcats brought in seven new recruits and all but one had an international background.

The BWB program is seeing a heightened measure of success, with a record number of 10 BWB alumni selected in the 2021 NBA Draft and a record 35 former BWB campers listed among the record 121 international players on opening-night NBA rosters for the 2021-22 season.

“A lot of people are not familiar with how proactive the NBA has been, particularly in the last few years on the basketball development side internationally. … The connection with Arizona is strong. I mean, we had five BWB alums alone on that roster,” Ebersole said.

As the NBA Draft nears, Mathurin is a projected early lottery pick, while Koloko could be a late-first to early second-round selection. With the life-changing event drawing nearer, University of Arizona associate head coach Jack Murphy believes Koloko and Mathurin have skills that will translate to the next level.

“You watch the NBA playoffs going on now, there are so few guys that can be rim protectors and defend on the perimeter effectively. I think Christian is one of those guys that has the opportunity or ability to do that.”

“With Ben, there are not many guys walking this earth that could score 20 a game in the NBA,” he said. “I’m not saying Ben will walk in scoring 20 a game, but he has that upside. He could be that type of scorer in the NBA.”

Koloko and Mathurin are continuing the ever-growing trend of success within the thriving international pipeline of players. With many of the top players in the league coming from counties outside the U.S., college basketball recruiters have taken notice.

“I think that you’re going to see upper echelon teams in college spend more time overseas and do the legwork,” Murphy said. “Every year, trying to recruit the top international players will get more and more competitive. You see the talent these guys are bringing to college basketball and the pros and the success that teams are having with them.”