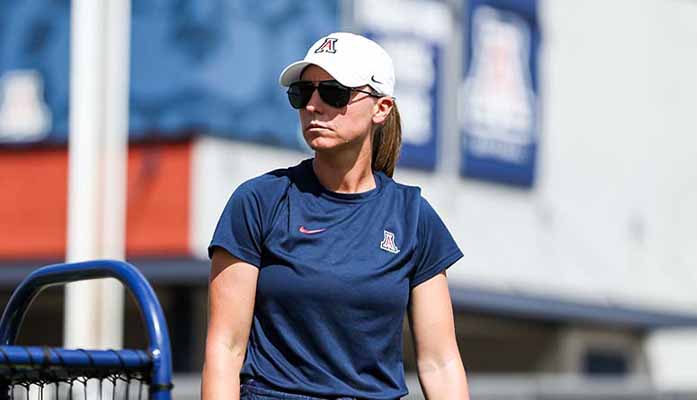 OKLAHOMA CITY – Tacking on accomplishments to an illustrious resume is nothing new for Arizona softball coach Caitlin Lowe.

Whether it’s winning a silver medal at the Olympics, having a Hall of Fame professional career, winning a pair of national championships with the Wildcats or going down as one of the best leadoff hitters ever, Lowe had done just about everything in the game before ever taking over the Arizona program. But in her first year at the helm in Tucson, Lowe has gone where no coach has ever gone before.

She became the first rookie head coach to reach the Women’s College World Series since the tournament expanded in 1988 and picked up her first win on the big stage with a 3-1 victory over Oregon State Friday night in an elimination game.

“It’s amazing (to contribute to coach’s first win at the Women’s College World Series),” said senior pitcher Hanah Bowen, who earned the victory with two no-hit innings of relief. “Cate is phenomenal. She has so much knowledge to the game, and I love feeding off of her. She deserves it.”

Lowe’s impact on her players goes beyond writing the lineup card. Her cool, calm demeanor set the tone for the team, which has won six of its seven games in the postseason after posting an 8-16 record in Pac-12 play.

It was an up-and-down season for the Wildcats.

They began the schedule as a Top 10 ranked team, then opened conference play with an 0-8 record. They went 8-8 the rest of the way to finish the regular season tied for last place in the Pac-12. Ultimately, it didn’t matter as Arizona players followed their coach’s lead.

“It’s super fun to play for Cate,” said Devyn Netz, who tossed five innings and allowed just one run on three hits against Oregon State. “It’s super, I’d say, laid-back. She trusts all of us to do our job, and I think that’s what she brings to the game. It’s that quiet confidence and that calm confidence that we can do it.” 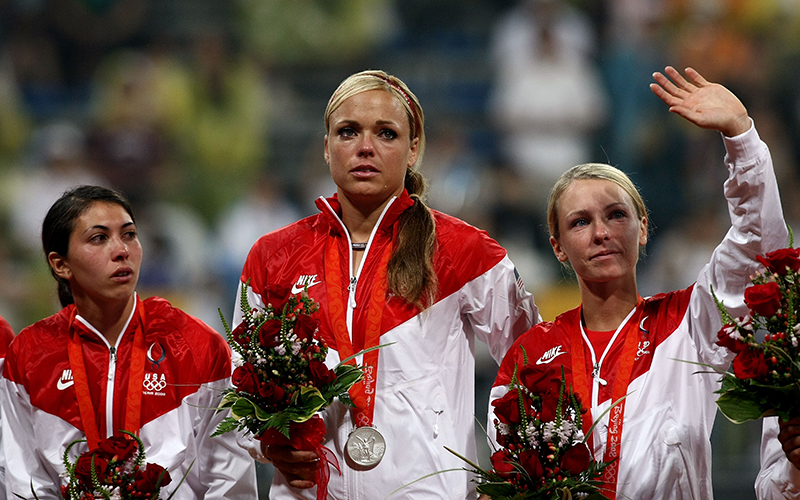 The impressive resume of Caitlin Lowe, left, incudes winning a silver media in the 2008 Summer Olympics along with Arizona teammate Jennie Finch, center, and Andrea Duran, who played at UCLA.. (Photo by Jonathan Ferrey/Getty Images)

The trust Netz spoke of was evident in the elimination game against the Beavers. One day after giving up a late lead against Oklahoma State and facing a Beavers team that the Wildcats lost to twice in the regular season, Lowe’s confidence never wavered in her players.

The Beavers managed just three hits, which all came in the second inning. The Arizona offense delivered in the sixth as sophomore Carlie Scupin broke a 1-1 tie with an RBI double to left center and Blaise Biringer added an insurance run with a single down the right field line.

“I think that’s a big deal. I’ve seen this team grow up in the postseason and go from wanting to be here to knowing they belong here and knowing they’re going to win here. And that’s super exciting for them.”

The Wildcats advance to play at 5 p.m. (Arizona time) Sunday when they will take on the loser of the showdown between top-overall Oklahoma and Texas.