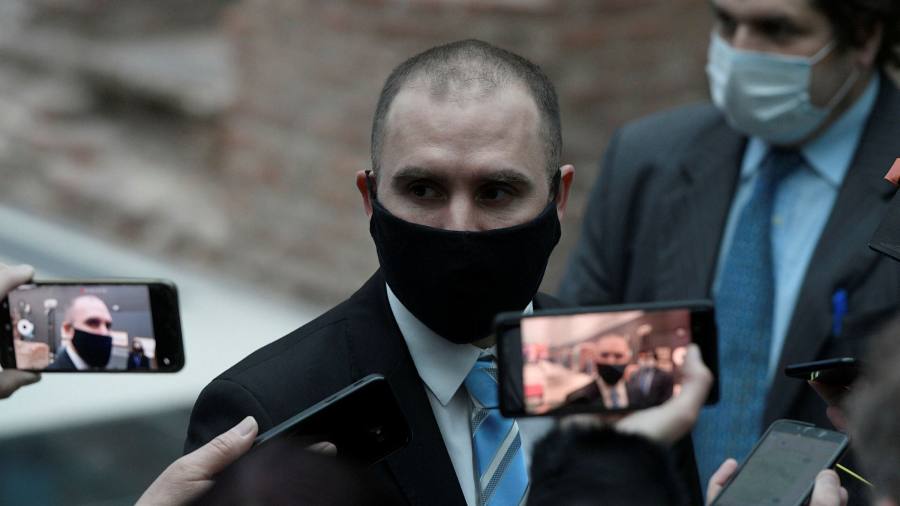 As Argentina’s economy minister tries to convince wealthy countries to postpone a $2.4bn debt payment due on May 30, some investors worry his attempts to avoid yet another default are being undermined by a faction at home led by vice-president Cristina Fernández de Kirchner.

Martin Guzmán, the 38-year-old finance minister, is touring several European capitals this week with President Alberto Fernández to appeal to members of the “Paris Club” of 22 countries, which include the US, Japan, France and Germany, to delay its debt payment.

Investors fear that if an agreement with the Paris Club is not reached amicably, it could upset negotiations over a larger, more critical deal with the IMF to keep its notoriously loose finances in check. Argentina had been expected to negotiate new repayment terms for the $44bn the IMF had lent it since 2018 shortly after it agreed a restructuring of $65bn in private debt in August.

But now, IMF officials do not expect to reach an agreement with Argentina until after midterm elections in October, as the Peronist government’s populist instincts to increase spending ahead of the vote kicks in.

Not so long ago, Guzmán was derided by the market as an inexperienced leftwing ideologue. “It’s so ironic and sad that investors are now actually cheering for Guzmán,” said Siobhan Morden, a managing director at Amherst Pierpont Securities in New York.

The impetus to spend has grown as a fresh wave of Covid-19 infections hits Argentina, where poverty has risen from 26 to 42 per cent after a three-year-long recession. That makes it improbable that the country will deliver the kind of fiscal consolidation that an agreement with the IMF would likely require.

The government’s chances of success have been jeopardised by repeated moves by the hardline “kirchnerista” faction loyal to the vice-president — a former president herself — to stymie Guzmán’s attempts at even modest fiscal consolidation.

Most recently, he failed to convince electricity under-secretary Federico Basualdo, a kirchnerista, to raise tariffs as much as 30 per cent for the first time in two years in order to keep pace with inflation, which is running at about 43 per cent.

Guzmán tried, and failed, to sack Basualdo for “incompetence”. But Basualdo clung to his job after effectively being over-ruled by the vice-president. Electricity tariffs are for now set to increase just 9 per cent this year, equal to about two months of inflation.

“Guzmán made a mistake in the way [he tried to fire Basualdo],” a leading politician loyal to Fernández de Kirchner said. “I believe that the issue will be resolved, but in silence.”

Mariel Fornoni, a pollster, said the fiasco was not only damaging for Guzmán, but the president himself.

“It has left [Fernández] in a position of absolute weakness. It reveals who takes the decisions,” she said. She pointed to polling data that showed about 55 per cent of Argentines believe that it is the vice-president who calls the shots in this administration, compared to just 35 per cent who think it is the president.

For Guzmán, the challenge is to convince the IMF and Paris Club of the credibility of his promises, given they appear to be vulnerable to sabotage from opposing factions of the governing leftwing coalition.

Most analysts believe that defaulting on the Paris Club is a real danger, especially with net liquid foreign exchange reserves only recently creeping back into positive territory.

“If Argentina uses reserves to pay [the Paris Club], the central bank will be left very exposed. So if they don’t manage to refinance the debt, a default is probable,” said Marina Dal Poggetto, executive director of EcoGo, an economic consultancy in Buenos Aires, conceding that refinancing will be “difficult, [but] not impossible”.

According to one person familiar with Argentina’s negotiations with the IMF, there had been no progress — with “nothing at all” agreed yet in terms of economic policies — because Guzmán “has not been able to come up with a strategy that is endorsed by the entire coalition that he can present to the IMF”.

Despite the delays, most agree that a deal of some kind with the IMF — however weak — is inevitable.

While defaulting on the Paris Club would lead to hefty financial and diplomatic costs, doing so with the IMF would mean embarking on a new period of financial isolation, potentially worse than the decade the country was locked out of international markets after its historic 2001 debt default. Paying the $18.5bn coming due to the IMF next year would be all but impossible.

“Reality has Argentina by the throat. Cristina [Fernández de Kirchner may be] throwing tantrums and her weight around, but that’s a sign of weakness in the face of ruinous polls and judicial setbacks, not of strength,” said one Wall Street investor.

“There is no alternative to a deal with the IMF, or plan B that Cristina can conjure up.”

US retailers compete to entice workers in face of labour shortage

DeFi: Who, what and how to regulate in a borderless, code-governed world? By Cointelegraph