Are Lawsuits The Only Way To Stop The Fake News? Adam Carolla Says Yes 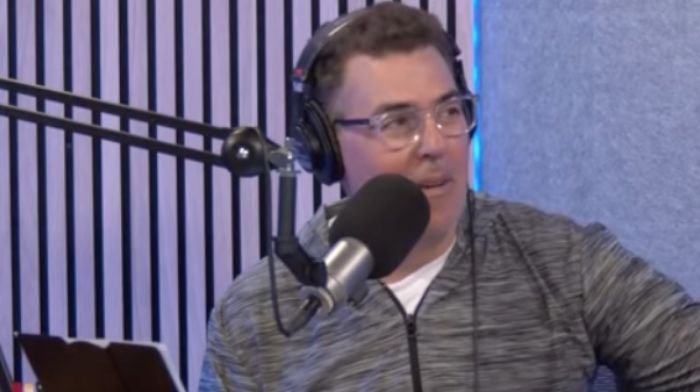 In the aftermath of the Johnny Depp/Amber Heard six-week dramatic public litigation, you can’t help but wonder if defamation lawsuits might be the only way to ensure the truth comes out.

Popular comedian and radio host Adam Carolla certainly thinks that the only way to shut down mainstream media lies is for people to stand up and fight in the form of defamation lawsuits and other litigation.

On The Adam and Dr. Drew Show, Carolla spoke passionately about how the mainstream media has consistently lied about high-profile issues.

Time to Wake Up and Smell the Lawsuit

In September of last year, photos emerged of Border Patrol agents on horseback dealing with a surge of Haitian illegal immigrants trying to cross the southern border. Photos showed the horsed agents swinging their reins.

It didn’t take long for politicians and the mainstream media to latch on to the photos to spin a racist narrative.

“They are trying to bring us back to slavery days and worse than that.”

The leader of the free world, President Biden, was quick to convict from the Oval Office, stating:

“I promise you, those people will pay. There will be an investigation underway now and there will be consequences.”

Nine months later, the Border Patrol agents have been cleared of criminal misconduct, but no apology from the Biden administration or CNN and other mainstream outlets who quickly judged them as racists whipping migrants.

There has been a severe lack of praise and response for the Border Patrol who stopped this shooter from this White House. I guess it’s hard to do that when you accuse them of running concentration camps and whipping migrants.

Carolla’s recommendation to sue CNN is clear and unmistakable:

In January of 2019, Nicholas Sandmann visited the Lincoln Memorial with his classmates. A video was taken of him and a Native American activist that went viral.

Sporting a MAGA hat and smiling at the activist, the media was quick to pounce on the incident, claiming that Sandmann and his classmates were there to mock the Native American group that was there as well.

A year later, Sandmann won a multi-million dollar defamation lawsuit against CNN. Dr. Drew Pinsky touched on this in the podcast, stating:

“You’d think [the media] would have learned their lesson. They’re still paying on that.”

What Will Kyle Do?

If anyone knows better than Sandmann, it’s Kyle Rittenhouse.

Before his trial was concluded, Sandmann penned his support for Rittenhouse to go after those who were quick to convict him before his day in court.

“The parallels between me and Kyle Rittenhouse are impossible not to draw. Kyle was almost immediately labeled a ‘white supremacist’ and a ‘domestic terrorist’.”

He goes on to hit on the main point:

“Kyle wasn’t given his day in court by his critics. And neither was I. The attacks on Kyle came from the National news media, just as they came for me. They came quickly, without hesitation, because Kyle was an easy target that they could paint in the way they wanted to.”

Rittenhouse has hinted that lawsuits may be coming for media outlets, politicians, and celebrities that had defamed his character. For example, after the Johnny Depp-Amber Heard verdict, Rittenhouse tweeted:

“Johnny Depp trial is just fueling me, you can fight back against the lies in the media, and you should!”

While not quite the exact parallels between Depp’s case and what Carolla suggests people should start doing, it does pose an interesting question.

I have a new announcement coming soon about my defamation cases, keep an eye on Fox News and https://t.co/ZihybAjj7N for more this week.

Johnny Depp trial is just fueling me, you can fight back against the lies in the media, and you should!

Is There Hope for Truth After All?

The Depp v. Heard case was so many things for many who watched it. It was gross; it solidified that perhaps our current relationship status isn’t so bad. It showed that women could be just as terrible as men in relationships.

And it shows the media has an agenda.

In response to the verdict yesterday, Depp released the following:

“Six years ago, my life, the life of my children, the lives of those closest to me, and also, the lives of the people, who for many, many years have supported and believed in me were forever changed.

“False, very serious and criminal allegations were levied at me via the media, which triggered an endless barrage of hateful content, although no charges were ever brought against me.

“The jury gave me my life back. I am truly humbled.”

So while Rittenhouse took a lot of heat for trying to compare his possible case against the media to the Depp-Heard case as apples to oranges scenario, I think you could see a comparison in terms of how broadcasted knee-jerk lies ruined the lives of both Depp and Rittenhouse.

The following case to watch is the lawsuit filed by John Paul Mac Isaac. The famed laptop repair man of Hunter Biden fame-turned-“Kremlin tool of disinformation” by the media is fighting back.

The Daily Beast issued an apology to John Paul Mac Isaac, the repairman who first obtained Hunter Biden’s laptop, after reporting in 2020 that the laptop was “stolen.”

Isaac is suing Democratic Representative Adam Schiff, CNN, The Daily Beast, and Politico for their coverage of the Hunter Biden laptop. The suit states in part:

“CNN’s broadcast of the false statement accuses the Plaintiff of committing an infamous crime, i.e., treason by working with the Russians to commit a crime against the United States of America by attempting to undermine American democracy and the 2020 Presidential election.”

Isaac lost his business due to the coverage and ended up having to move to Colorado to escape harassment. He has said of his lawsuit:

“This was collusion led by 51 former pillars in the intelligence community and backed by words and actions of a politically motivated DOJ and FBI. I want this lawsuit to reveal that collusion and more importantly, who gave the marching orders.”

Is there hope for truth? Is litigation the only way we can fight fake news and blatant lies? I think Adam Carolla could be on to something.