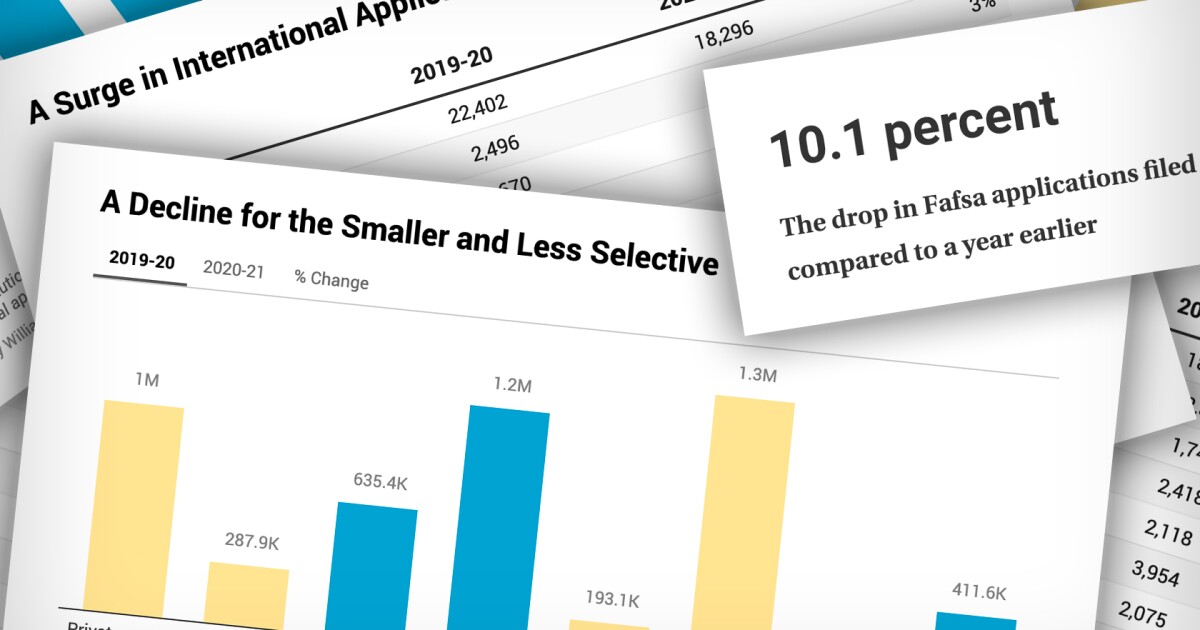 The college-application season is underway for the high-school class of 2021, and early warning signs about the pandemic’s effects have begun to surface.

While the volume of applications over all is up 10 percent from a year ago, there are other, more troubling trends beneath this topline number, according to new data about submissions of the Common App from after the January 1 and 15 deadlines that some colleges have. The number of first-generation applicants is down 3 percent from this point a year ago. The number of students who requested fee waivers for their applications also fell, by 2 percent.

Although both groups have recovered some from a 7-percent slide in December — and many low-income and first-generation students tend to apply later in the admissions cycle — it’s clear that the pandemic is continuing to have equity implications for higher education.

This fall, the number of first-time freshmen declined by 13 percent from the year before, with sharp drops among first-time Black, Hispanic, and Native American students in particular, according to the National Student Clearinghouse Research Center.

“This is still really problematic, and we have to be laser focused on this,” said Eric Waldo, chief access and equity officer at Common App, which has more than 900 institutions as members. “We don’t want to see a lost generation of students who end up not going on to further their education because of this pandemic.”

Here are some other noteworthy data points:


The drop in Fafsa applications filed by high-school seniors as of January 15, compared to a year earlier

Fewer high-school students nationally are completing the Fafsa, according to the National College Attainment Network’s Fafsa tracker. The drop in aid applications suggests many students aren’t on track to go to college; high-school seniors who complete the form — available October 1 every year — are 84 percent more likely to immediately enroll in postsecondary education, the national network says.

Other student groups whose Fafsa filing numbers are lagging: Students at high schools that serve low-income populations and are eligible for Title I money (down 13 percent), and those who are at high schools with high minority student bodies (down 15.4 percent).

Even before the pandemic began, international student enrollment was already dropping. But Common App data through January 18 shows a 9-percent increase in applicants from countries outside the United States compared to 2019-20. China continues to be the leading place of origin for international students in the U.S. — last academic year it sent about 372,000 students — but applicants from China fell 18 percent from a year ago.

However the surge of applicants from India and other countries that made up the Top 10 countries by applicant volume in the Common App data seems to be in line with what experts have said about where potential growth for new pools of international students exists. India is second to China in sending its students to America for college.

The application picture for next year is still far from complete. After February 1, nearly 670 institutions that accept the Common App will still be taking applications. After March 1, that number drops to roughly 600.

Waldo said low-income and first-generation students need additional support in the months ahead.

“We have to find those students and make sure they have what they need to apply to college,” he said. “The goal and the hope is that students can and will still apply.”

Do You Read Books on Higher Ed During ‘Normal’ Working Hours? | Inside Higher Ed

Ep. 65: Debating the Value of College Arts (and Other) Programs | Inside Higher Ed