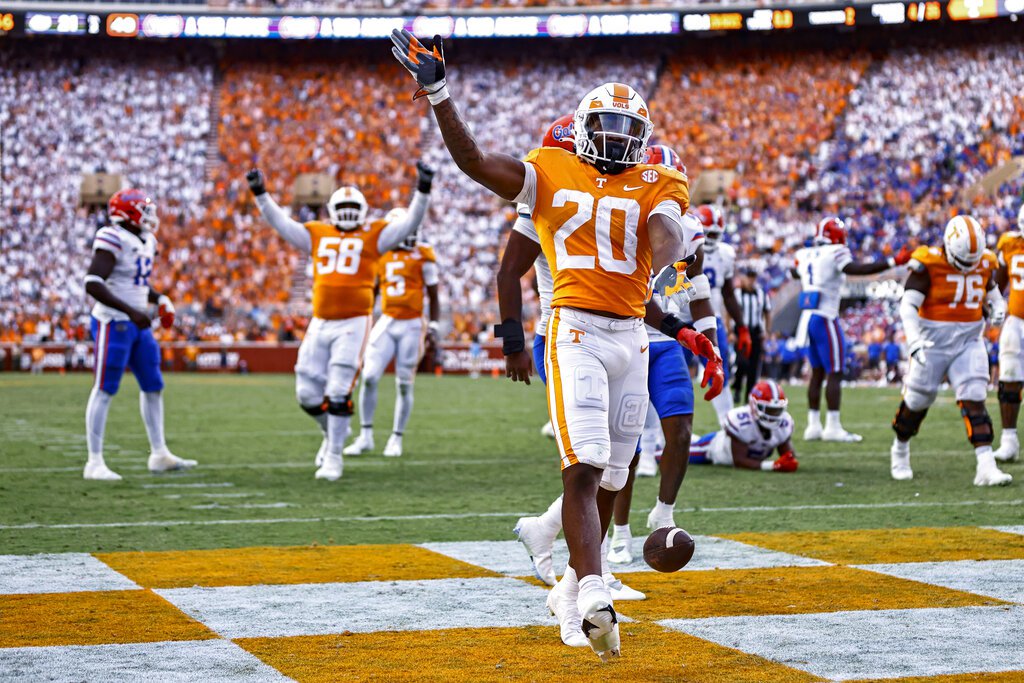 Tennessee running back Jaylen Wright (20) celebrates a touchdown during the second half of the team’s NCAA college football game against Florida on Saturday, Sept. 24, 2022, in Knoxville, Tenn. Tennessee won 38-33.

Tennessee and North Carolina State broke into the top 10 of The Associated Press college football poll Sunday, and Florida State is back in the rankings for the first time in four years.

Oklahoma’s upset loss to Kansas State created room for teams to move up, like Southern California to No. 6 and Kentucky to No. 7.

Tennessee moved up three spots to No. 8, its best ranking since 2006 and first top-10 appearance since a few weeks at ninth in the first half of 2016. That was the last time the Volunteers started 4-0. The Vols knocked Florida out of the rankings by snapping a five-game losing streak in the rivalry.

Oklahoma State remained at nine and North Carolina State jumped two spots to No. 10. The Wolfpack have their best ranking since they were 10th in 2002.

Texas and Miami both dropped out of the rankings after being beaten by unranked teams to fall to 2-2. The Longhorns blew a 14-point lead second-half lead and lost in overtime at Texas Tech. while Miami, which started the season at No. 16, was upended by four-touchdown underdog Middle Tennessee State.

While the Hurricanes and Gators slipping out, No. 23 Florida State (4-0) moved in. The Seminoles are off to their best start since 2015 and in the AP Top 25 for the first time since beginning the 2018 season No. 19, snapping a streak of 69 straight polls unranked.

Florida State’s poll drought was remarkable considering how the Seminoles have been a Top 25 staple since the late 1970s.

Florida State’s streak of 211 straight weeks ranked from 1989-2001 is the third longest streak in the history of the poll and its streak of 42 straight seasons appearing in at least one poll from 1977-2018 is fourth all-time.

Before the current drought, Florida State had not gone consecutive seasons without being ranked for at least one poll since 1973-77, which was the late Bobby Bowden’s first season as coach.

Two other teams are making their Top 25 debuts this week:

— No. 21 Minnesota enters the rankings after crushing Michigan State on the road. The Gophers are ranked for the first time since a short stay in 2020.

— No. 25 Kansas State upset a top-10 ranked Oklahoma team for the third time in the last four seasons. The Wildcats have been briefly ranked in each of the last three seasons, but never more than three weeks.

No. 10 North Carolina State at No. 5 Clemson. The 87th meeting will be the first matching top-10 teams.

No. 9 Oklahoma State at No. 16 Baylor. Cowboys and Bears played twice as ranked teams last season.