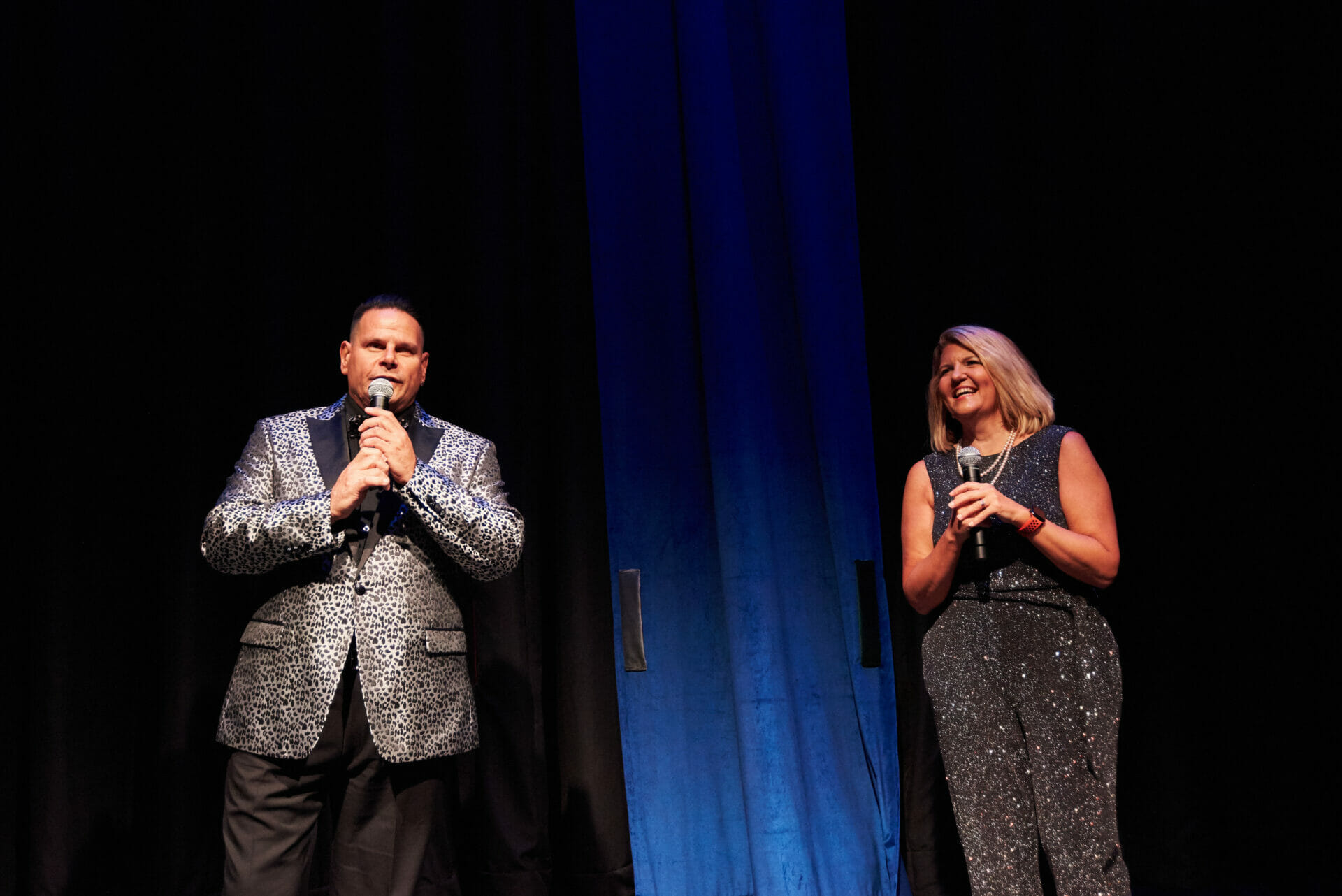 Anthony Rodriguez, Aurora Theatre’s co-founder and president/CEO, long has been fond of sharing the story of how he looked out his downtown Lawrenceville office window one day and envisioned a larger venue for the company. It took many years, but the new $45 million, 59,500-square-foot Lawrenceville Arts Center opened in late 2021 and is quickly becoming a magnet in the pedestrian-friendly town center that Aurora was a key force in reviving.

However, in surprising news that broke earlier this month, Rodriguez revealed that he is leaving the company he and his life partner and co-founder Ann-Carol Pence have made a powerhouse regional theater over the last 27 years. He has accepted a job as the first executive director of the HUB404 Conservancy, where he will lead a $270 million campaign to build a nine-acre park capping GA 400 in Buckhead between Peachtree and Lenox roads that would feature public art and arts programming. Rodriguez will begin full-time August 1.

That leaves Pence, now holding Rodriguez’s old title of producing artistic director, at the helm, working alongside Katie Pelkey, the company’s managing director. Pence has run daily operations for the company since day one, so not much forthcoming will be a surprise. One of her new duties, however, will be helping to identify and make recommendations on the individual and/or team that will head the company in the next decade.

“I feel what I can help with is help find the new voice for the theater,” Pence says, “shepherd that voice to leadership and get that person in the room a lot before I retire myself.”

Still, Rodriguez’s departure and Pence’s talk of being a bridge to new leadership have been plot twists that many in the theater community did not see coming — the Aurora cofounders having been strong lead players in the company’s growth over nearly three decades.

Rodriguez, 58, admits that the decision to give up his role was a difficult one. The question he has gotten most often is, “Why now?”

During the pandemic, he says he reflected a lot on what a new chapter for Aurora would look like without him.

“Ann-Carol and I have said for years that we are building an environment to craft a legacy and to create a community of belonging, but it doesn’t always have to be our voice centered in the room,” he says. “There is never a perfect time to take advantage of opportunities. If you wait for that perfect pitch or moment, it may likely never come. We finished what we set out to accomplish with the Lawrenceville Arts Center.”

Open for not quite three-quarters of a year yet, though, Lawrenceville Arts Center is hardly a finished product, many would say, but in its early stages still. (More on this below.)

Rodriguez scoffs at any notion that his new job marks a different career path. “I know it all seems pretty quick, but I have the opportunity to literally change the face of Atlanta with a transformative project. Who wouldn’t want to do this?”

Meanwhile, Pence, 57, has made a commitment to remain active at Aurora for five years, utilizing that time to find the right leadership team and built trust with that team around Lawrenceville. Trust is a big item, as Lawrenceville Arts Center is owned by the city of Lawrenceville but operated by Aurora.

Once she retires, Pence believes the theater probably will transition to an executive director leadership model. She and Rodriguez believe that the Aurora board of directors will promote Pelkey, a longtime staffer who has risen in the ranks, to that position.

Pence will aim, as well, to continue the company’s commitment to diversity, both on its stages and off, and keep providing opportunities to women. She also hopes other theater leaders will emerge from the company’s apprentice program.

Following Rodriguez’s departure, she also will continue to be the company’s music director. It’s a role that’s very special to her.

“People say, you should give away those low-level jobs and be management, but that is my one gift,” she says. “I am never going to be a great singer or a great actor. I am destined to motivate — and I think my ability to motivate is my other superpower. I don’t want to give up my two superpowers. I may open a show and hand it to my number two, which is what I was able to do with Cinderella [in its March-April run this season], so I can sit in the audience and see what it looks like from there and make it better.”

She doesn’t see herself directing productions, however. “I like having collaborators, but, make no mistake, if I am in the room, everyone knows I’m in the room.”

Nurturing Lawrenceville Arts Center from a dream to fund-raising and architectural plans and then to reality has been a long-held dream for Pence and Rodriguez, but with it has come new challenges such as a natural inclination to try and do too much in the expanded space. Yet the two have never backed away from new work demands. To help with the faster pace, Pence and Rodriguez have made numerous new hires over the last year, including former Dad’s Garage artistic director Jon Carr as marking director. They also are nearing a decision about a full-time development director.

With a $4.25 million annual budget, the company has expanded to 20 full-time employees and 10 part-time staff, as well as various contract workers and more than 100 performing artists each season.

In other words, running five stages between Lawrenceville Arts Center and the adjoining Bobby Sikes Fine Arts Center (the company’s home since 2007) is very much a work in progress, with many moving parts.

That made the “We finished what we set out to accomplish with the Lawrenceville Arts Center” comment by Rodriguez an eye-raiser when ArtsATL interviewed him not long after his departure was announced.

Seeking to better understand his thinking, ArtsATL asked him to elaborate in a follow-up email.

“My personal goals for the Lawrenceville Arts Center and Aurora were larger in scope that just getting it open and running,” Rodriguez clarified. “But when the HUB404 opportunity came along I felt the time was right to step away from the day to day. The larger goals remain, and I can support the Aurora and the City’s efforts as an engaged board member. Timing may be the secret to comedy, but timing isn’t always perfect when it comes to opportunity. Sometimes you must take a leap of faith.”

Lawrenceville Arts Center, he said in the initial interview, is “running very well, very smoothly and successful, and we have a very strong team.”

Pence enthusiastically supports her partner’s decision and penned more than one social media post applauding his bold move. “I am so proud of this man,” she wrote in one. “Anthony Rodriguez is here on this earth to do new great things.”

In the ArtsATL interview, she said, “This was right for our family financially and aspirationally.”

The current Aurora season is closing with the world premiere of the farcical Swindlers, which Pence, partnering with the Broadway Factor production company, hopes can find life afterwards on the Great White Way. That has always been another dream of hers.

She is also excited about next year’s lineup. The 2022-23 schedule will open in August with a remount of 2016’s Mary Poppins with original cast members Galen Crawley York and Andy Meeks. “Once we broke ground on the Lawrenceville Arts Center, I was bound and determined we were going to fly (the character) over the new stage,” Pence says.

A holiday version of Christmas Canteen, the drama Kim’s Convenience, Summer: The Donna Summer Musical and the comedic The Play That Goes Wrong round out the season.

As a co-founder and board member, Rodriguez assures that he will remain invested in what goes on. He’s still planning on staging his annual one-man Christmas Carol later this year. There has been some discussion about him being involved in The Play That Goes Wrong, but he says he needs to sort out the demands of his new job before making additional commitments.

“The City appreciates the dedication and passion Anthony provided to the city for the arts,” says Chuck Warbington, city manager for the City of Lawrenceville and an Aurora board member. “He will certainly be missed, and we are excited that he will continue to stay involved as a member of the Aurora board.”

Rodriguez may be stepping away from the day to day, but he and Pence say he will maintain a profile at the theater that has been their obsession for 27 years. For instance, he and Pence believe it’s important that he continue to give curtain speeches at select performances.

“We used to live three minutes from the [original Aurora location in Duluth] and we now live 12 minutes from the Lawrenceville Arts Center,” Pence says. “We are committed to always being part of this community, so that is why you’ll see him in the lobby and doing speeches. We are proud to be Gwinnett residents.”

Bruises are harder to detect on people of color in abuse cases. New technology could change that.