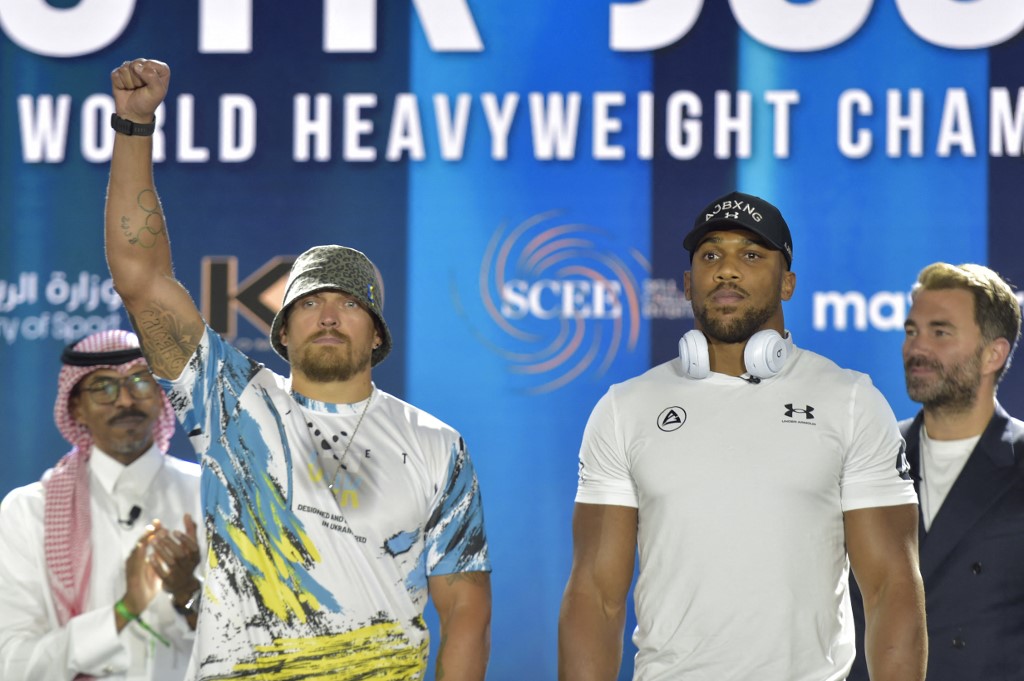 Ukraine’s Oleksandr Usyk (L) and Britain’s Anthony Joshua (R) pose for a picture during the press conference to announce the heavyweight boxing rematch for the WBA, WBO, IBO and IBF titles in Jeddah on June 21, 2022. (Photo by Amer HILABI / AFP)

Anthony Joshua insists he is “hungry” to regain the world heavyweight title as the dethroned champion sets his sights on knocking out Oleksandr Usyk in their rematch in Saudi Arabia.

Joshua suffered a shock defeat against Usyk last September as the Ukrainian took the WBA, IBF and WBO titles from the British star after a unanimous decision victory.

Joshua has a chance to avenge that painful loss when he faces Usyk again on August 20, with boxing pundits claiming he must use his physical superiority to disrupt his opponent’s rhythm this time.

Having linked up with new trainer Robert Garcia, Joshua hinted that is the game-plan as he allayed concerns he might have lost his appetite for the sport.

“What happened then is in the past, I don’t really live in the past, I’m just present,” he told reporters in London on Wednesday.

“I’ll be looking to be competing round-by-round and if I follow my As, Bs and Cs, it should lead me to KO.

“Someone said to me ‘you’ve got a chance to become three-time heavyweight champion of the world’. I said ‘it’s not where you want to be, I wouldn’t advise anyone young to go down that route’.

“You want to stay there and keep it, so I’m definitely desperate to get my hands on it. But there’s too much talking. Less talk, more action. I’m not a comedian, I’m not someone who likes big speeches.

“Let me get in there and do my job, that’s my priority. I’m definitely hungry, definitely desperate but how I perform will speak volumes to the masses.”

While this will be Joshua’s second fight in Saudi Arabia, it will be a first in the country for Usyk, who has won all 19 of his professional contests.

Saudi Arabia has been routinely accused of human rights violations and has faced claims of attempting to ‘sportswash’ its reputation.

But although there were no questions about the Gulf State’s reputation on Wednesday, Usyk suggested money was not the driving factor in his decision to fight there.

“It opens some new horizons,” he said. “I’m not fighting for money or the recognition, many people want the recognition so others remember them. But I don’t need to become the great.

“I’m just doing my job now and I will continue doing it while my heart is beating. The only thing I’m on my way to is to save my soul. Everything else that is happening to me is just life.”