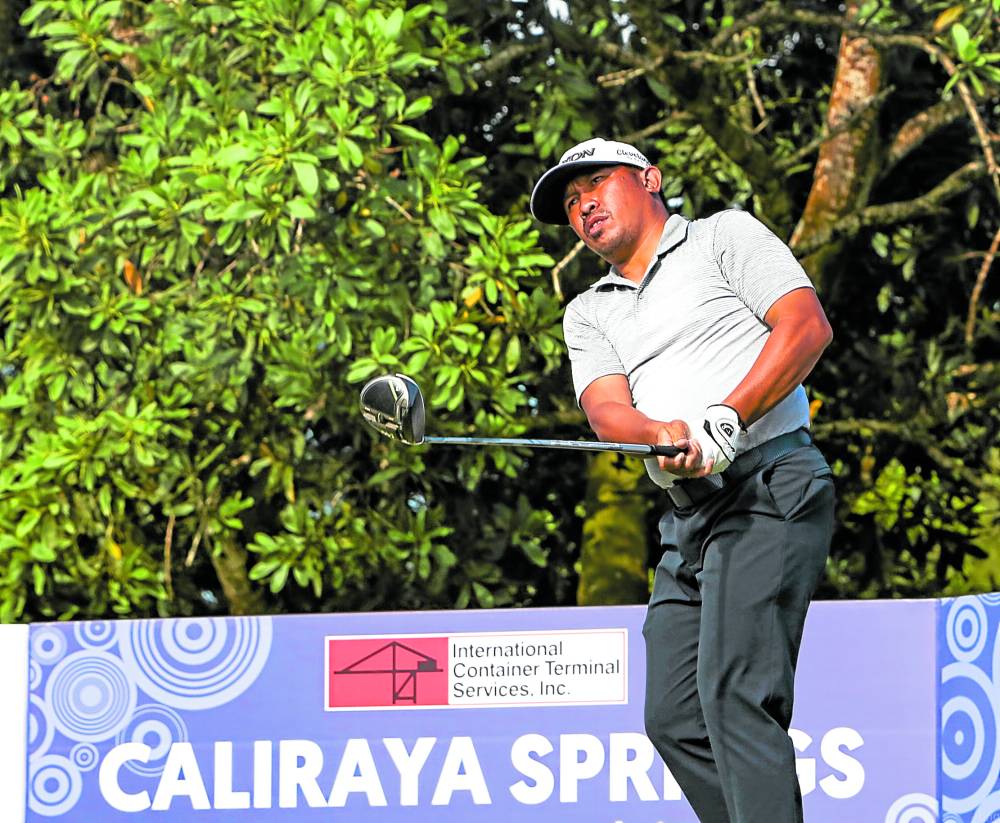 Joenard Rates watches his drive early in the first round. —CONTRIBUTED PHOTO

Joenard Rates stayed bogey-free for two straight rounds and submitted another four-under-par 68 on Wednesday to catch Zannie Boy Gialon at the top after 36 holes of the P2-million ICTSI Caliraya Springs Championship in Cavinti, Laguna, where Chanelle Avaricio wrested a one-shot lead in ladies’ play.

Rates, a multileg winner on the Philippine Golf Tour (PGT), had two birdies on each nine for a 136 aggregate, which Gialon matched after returning a 69 as the duo heads into the money rounds holding a four-shot lead over the long-hitting Clyde Mondilla, who fired a 71, and Dutchman Guido van Der Valk, who fired a 68.

“I avoided trouble, hit some good drives out there,” Rates said. “I’m happy to be in contention.”

Former PH Masters winner Jessie Balasabas blew into contention after shooting a 68 for 141 like Antonio Lascuña, who assembled a 70 even as three more players were at under-par heading into the final 36 holes with former national champion Rupert Zaragosa six shots off the pace after a 69.

Action in the accompanying P750,000 ladies division wasn’t as hot as the lean field struggled with Avaricio’s 74, enough to give her the edge over Chihiro Ikeda, who shot a 73.

The champion two weeks ago at Hallow Ridge, Avaricio takes a 145 tally into the final round on Thursday even as Marvi Monsalve’s bid practically disintegrated as she followed up a first round 69 with an 85 to be nine shots behind and virtually out of the title chase.

Daniella Uy’s 72 was the best for the day as she crept to a tie with Ikeda.

The third place finisher as an amateur in the Luisita stop of the PGT three weeks ago, Bucay had three birdies against two bogeys for an even 144 to overtake Ho, who shot a 75.

Kristoffer Arevalo, a member of the national team, shot a 73 for a share of third two strokes behind.