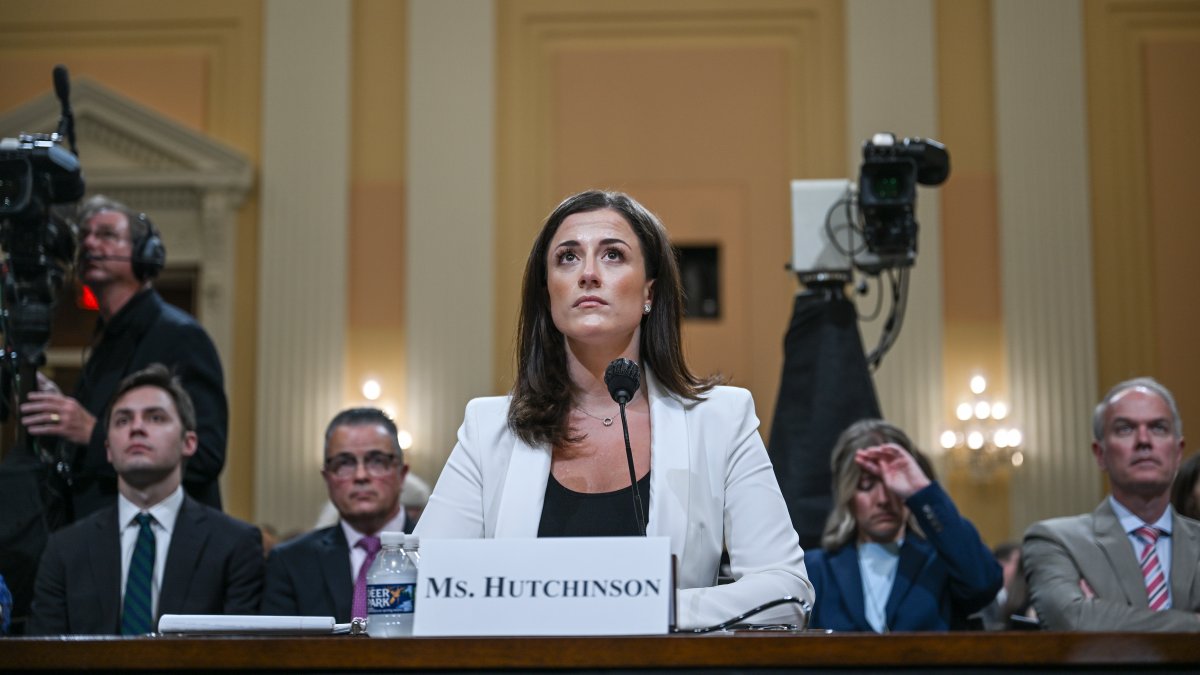 The House Jan. 6 committee held a surprise hearing Tuesday delivering alarming new testimony about Donald Trump’s angry, defiant and vulgar actions as he ignored repeated warnings against summoning the mob to the Capitol and then refused to intervene to stop the deadly violence as rioters laid siege.

Witness Cassidy Hutchinson, a lesser-known former White House aide, refused to join those in Trump’s circle staying silent and provided first-hand knowledge of what she saw and heard in the run-up to the Jan. 6, 2021 insurrection, a proximity to power that gives stunning new details in the panel’s year-long investigation.

With calm, detailed recollections, Hutchinson testified that a defiant Trump was told there were guns and other weapons in the rally crowd at the White House, but sent his supporters to the Capitol anyway and even sought to physically pry the steering wheel from his presidential motorcade driver so he could join them.

Trump was clinging to his false claims of voter fraud and refusing to concede the 2020 presidential election to Joe Biden as Congress was preparing to certify the results.

Before joining the White House, Hutchinson had worked in some of the most conservative Republican offices on Capitol Hill. She was hired as special assistant to the president and promoted up as principal aide to Trump’s chief of staff Mark Meadows.

Highlights from the sixth hearing:

Trump was angry and defiant on the morning of Jan. 6, as he assessed the size of the crowd for his “Stop the Steal” rally in front of the White House, upset that not everyone who had answered his summons to come to Washington could get in to see him because of the security lines.

Told that guns, knives, brass knuckles and other weapons were being confiscated from the security screenings, Trump didn’t care. “They’re not here to hurt me,” the president said. He wanted to take away the magnetometer stations to allow more people inside the grounds, regardless of their weaponry.

Trump’s lawyers at the White House were trying to tamp down the president’s speech to the crowd he had summoned for Jan. 6, and they were trying to stop his plans to go to the Capitol that day when Congress would be certifying the election results for Biden’s victory.

Hutchinson testified that lawyer Eric Herschmann said it “would be foolish” to include some of the language the defeated president wanted to add to his speech — comments like fighting for Trump, or him telling the crowd “I’ll be there with you.” Herschmann warned such language shouldn’t be included for legal concerns and because of the optics it would portray.

That language ultimately was used by Trump as he rallied the crowd to “fight like hell” and promised he would join them at the Capitol.

Days before Jan. 6, White House counsel Pat Cipollone suggested there were “serious legal concerns” if Trump went to the Capitol with the crowd, Hutchinson recalled.

“We need to make sure this doesn’t happen,” she recalled Cipollone saying in the run-up to the rally.

The morning of Jan. 6, Cipollone restated his concerns that if Trump did go to the Capitol to intervene in the certification of the election, “We’re going to get charged with every crime imaginable.”

Hutchinson then described what happened after the rally as Trump climbed into the presidential SUV, as relayed to her later by Trump’s deputy chief of staff for operations, Tony Ornato.

Trump, inside the vehicle, tried to pry the steering wheel away from the driver, Bobby Engel, demanding to be taken to the Capitol.

Told to take his hand off the wheel, “Mr. Trump then used his free hand to lunge toward Bobby Engel,” Hutchinson said holding her left hand to her throat to indicate what Trump did.

Engel was in the room as Ornato relayed the encounter and did not dispute it, she said.

PROXIMITY TO POWER, AND KETCHUP

The hearing opened with a calm, even-spoken Hutchinson explaining her job responsibilities advising Meadows, often handling his cell phones, as the committee showed an architectural rendering of the layout of the West Wing.

Hutchinson’s office was situated between the Oval Office on one side and Meadow’s office at the end of the hall on the other. Hers was also next to that of the vice president’s staff.

She had an upfront view of conversations across the offices and beyond.

Hutchinson described fielding a desperate phone call as she stood backstage at Trump’s rally that day from House GOP leader Kevin McCarthy, who was upset that Trump had sent the crowd to the Capitol when she had promised they would not go.

She also told of helping the White House staff mop up ketchup off the walls of the Oval Office dining room after Trump, learning that his attorney general, William Barr, told The Associated Press there was no fraud on a scale to tip the presidential election, apparently hurled a plate of food at the wall.

In one gripping scene Hutchinson recalled walking with Trump lawyer Rudy Giuliani out of the White House when he asked if she was “excited about the 6th.”

When she returned inside and told Meadows of that conversation, he told her a lot was going on.

“Things might get real, real bad,” Meadows told her, she recalled.

As the mob laid siege to the Capitol, lawyers and some others at the White House wanted Trump to do something to quell the mounting violence.

A makeshift gallows had been erected on the National Mall, as rioters roamed the halls searching for congressional leaders and taunting “Hang Mike Pence.” The House and Senate had abruptly halted the proceedings, lawmakers whisked to undisclosed locations for safety.

Hutchinson recalled the conversations inside the Oval Office as she brought Meadows a phone call and later as the White House lawyers implored the chief of staff to get Trump to act.

“You heard it,” Meadows told Cipollone, she recalled. “He thinks Mike deserves it. He doesn’t think they’re doing anything wrong.”

Trump then tweeted in the midst of the siege that Pence didn’t have the courage to do what he wanted — reject the electors from the battleground states, stopping Biden’s election. Hutchinson described the wave of sadness that hit her.

“As a staffer that works always to represent the administration to the best of my ability to showcase the good things he had done for the country, I remember feeling frustrated, disappointed … I was really sad,” she testified.

“As an American, I was disgusted. It was unpatriotic. It was un-American. We were watching the Capitol building get defaced over a lie.”

Hutchinson described the thinking at the White House that day as falling into three groups — those who wanted Trump to take action, others toeing the line knowing Trump didn’t want to call off the rioters, and a “deflect and blame” group who tried to pin the violence on non-Trump supporters.

Meadows, she said, was in the deflect-and-blame category, but eventually took a more neutral stance.

She had recalled how on the eve of Jan. 6, Meadows wanted to join Giuliani and other Trump allies who had arranged a “war room” at the Willard Hotel to fight for his presidency. She advised her boss she didn’t think it was appropriate for the White House or its chief of staff to be involved.

Those closest to Trump, including his daughter Ivanka Trump and son, Don, Jr., were imploring staff to have the president take action to curb the violence, the committee has said.

The committee produced evidence that Cabinet secretaries were considering invoking the Constitution’s 25th amendment, which has never been used, to remove the president from office.

Trump was finally convinced to deliver a speech the next day trying to calm the nation.

But Trump also tried unsuccessfully to add to his speech that those involved would be pardoned by him for their actions to avoid criminal prosecution.

Asked if Giuliani was interested in a presidential pardon related to Jan. 6, Hutchinson said he was.

And Meadows? “Mr. Meadows did seek that pardon,” she testified of her former boss.

A person familiar with the matter denied that Meadows had ever sought a pardon.

‘WE ARE ALL IN HER DEBT’

The Jan. 6 committee was not expected to meet again until July, but called Tuesday’s surprise hearing to receive Hutchinson’s testimony.

Chairman Bennie Thompson and vice-chair Liz Cheney both said it was not easy for the former staffer to come forward, noting that many others have defied the panel’s request for information.

Cheney then laid out in chilling detail the kinds of calls and messages some witnesses have told the committee they received before testifying — implying a potential form of witness tampering Cheney said is of serious concern.

One witness said they were told as long as they continued to be “a team player” they could remain in Trump world’s good graces. They were reminded that Trump does read transcripts.

Another witness received a call from someone who said a person was aware they were having their deposition the next day and “he wants me to let you know he’s thinking about you, he knows you’re loyal, you’re going to do the right thing.”

The panel does not have the power to charge Trump with any crimes, but the Justice Department is closely watching the proceedings as its own investigation intensifies.

Thompson, D-Miss., said the committee’s work will continue and he encouraged others to step forward.

“If you heard this testimony today and suddenly remember things you couldn’t previously recall or there are some details you would like to clarify … Our doors remain open,” he said.