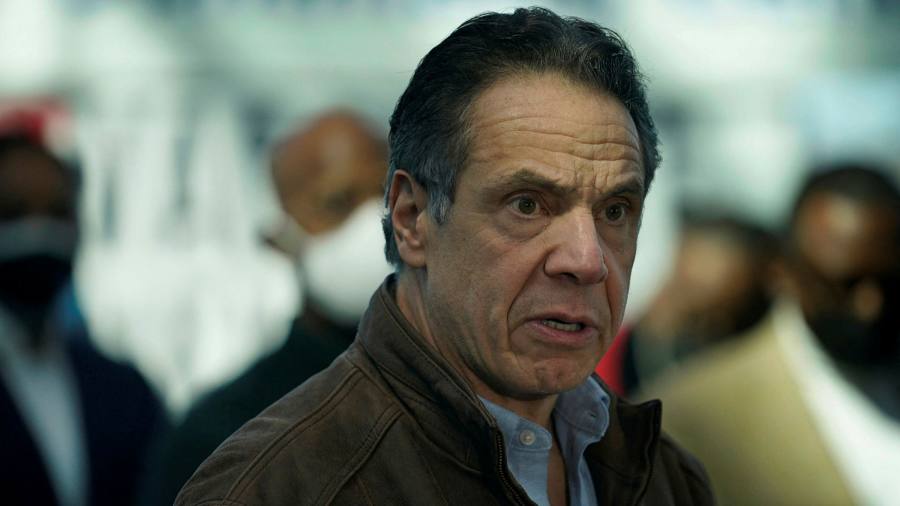 New York governor Andrew Cuomo denied claims he sexually harassed women and said he would not resign, hours after the majority of the state’s Democratic Congressional delegation called on him to quit.

“I did not do what has been alleged. Period,” Cuomo said, referring to half-a-dozen complaints of sexual harassment and inappropriate behaviour lodged in recent weeks by former female aides.

During a defiant call with reporters, the embattled governor questioned the motives of fellow Democrats who have joined calls for him to step down before the completion of formal investigations, saying their behaviour was “reckless and dangerous”.

He at one point blamed “cancel culture” for his predicament and said he was not part of the “political club”, despite being the son of a three-term New York governor and having spent much of his life in prominent political positions.

The governor’s resistance raises the stakes in an escalating and increasingly ill-tempered stand-off between his administration and a growing camp of legislators in Albany and Washington.

Hours earlier, a dozen New York members of the House of Representatives — including Jerrold Nadler, the chairman of the judiciary committee, and progressive stars Alexandria Ocasio-Cortez and Jamaal Bowman — issued statements calling for Cuomo to step down.

“The repeated accusations against the governor, and the manner in which he has responded to them, have made it impossible for him to continue to govern at this point,” Nadler said, concluding: “Governor Cuomo has lost the confidence of the people of New York. Governor Cuomo must resign.”

Meanwhile, Ocasio-Cortez and Bowman said it was “alarming” that the latest incident of alleged sexual assault against the governor took place just months ago, and expressed concern for the safety of his staff.

The steady pressure against Cuomo entered a new phase on Thursday evening when the Speaker of the state assembly, Carl Heastie, said he would authorise the judicial committee to begin an investigation of the governor — a move that could lead to impeachment proceedings.

Cuomo, a three-term Democratic governor, became a national political star for his commanding performance in the early days of the coronavirus pandemic.

But his standing has been diminished for his handling of the state’s nursing homes during the pandemic. The New York attorney-general found in January that his administration had undercounted Covid-19 fatalities for nursing home residents by as much as 50 per cent.

This came after a controversial order by the governor in April last year requiring nursing homes to accept Covid-19 patients discharged from hospitals. The policy was intended to free up space in hospitals amid worries they would soon be overwhelmed by the pandemic, but has since been blamed by critics for spreading lethal infections among vulnerable nursing home residents.

The pressure on him has further increased due to a drum beat of accusations in recent weeks of sexual harassment and inappropriate behaviour toward female staffers. Cuomo has apologised for “whatever pain I caused” but insisted he never touched anyone appropriately.

Cuomo has repeatedly urged the public to withhold judgment until an investigation of his conduct overseen by the New York attorney-general is completed. There is no timetable for that review.

He was prompted by a report this week in the Albany Times Union alleging that Cuomo summoned a young staffer to his mansion late last year and groped her. The matter has been referred to the Albany police.

“I want to make it clear that what is being alleged just didn’t happen. The last allegation is not true,” Cuomo said on Friday. “And I have not had a sexual relationship that was inappropriate. Period.”

The battle to remove Cuomo, who has dominated the state’s politics for a decade, is raging as New York enters a critical juncture in its Covid-19 vaccination campaign.

The state is also in the middle of fraught budget negotiations, with many progressive Democrats determined to push through higher taxes on the wealthy as well as other priorities that the centrist governor has thwarted in the past.

In his statement, Nadler, one of the leaders of the impeachment trial of the former president former president Donald Trump, acknowledged that the investigations of the governor were not complete, but argued that it was time to act.

“There is a difference between formal investigations that may end in criminal charges and a question of confidence in our political leadership,” he said. “The question before us is squarely a political judgment.”

New Views across the Galaxy