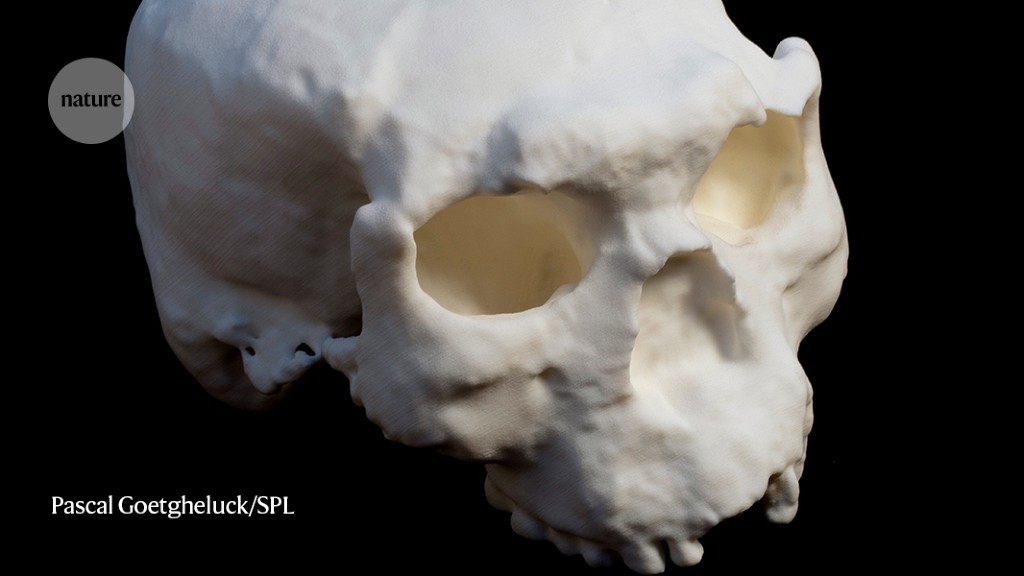 Researchers are heralding the discovery of an ancient human skull in central China as an important find. As excavation of the remarkably intact fossil continues, archaeologists and palaeoanthropologists anticipate that the skull could give a fuller picture of the diverse family tree of archaic humans living throughout Eurasia in prehistoric times.

The skull was discovered on 18 May at an excavation site 20 kilometres west of Yunyang — formerly known as Yunxian — in central China’s Hubei province. It lies 35 metres from where two skulls — dubbed the Yunxian Man skulls — were unearthed in 1989 and 19901, and probably belongs to the same species of ancient people, say researchers.

“It’s a wonderful discovery,” says paleoanthropologist Amélie Vialet at the National Museum of Natural History in Paris, who has worked on the first two skulls, commonly referred to as Yunxian 1 and 2. Unlike those earlier discoveries, which were crushed and distorted after millennia underground, the third skull, Yunxian 3, seems to be in good condition.

In 2010, Vialet and colleagues created digital reconstructions of the Yunxian 2 skull, and confirmed that it was probably a member of the archaic human species Homo erectus2. Dating of sediment and animal fossils from the site suggest that the Yunxian humans lived between 1.1 million and 800,000 years ago.

Homo erectus was first described from fossils found on the Indonesian island of Java in the late nineteenth century. Javanese fossils dating to 1.5 million years ago suggest that members of the species might have been the first early humans to have ventured out of Africa.

Homo erectus was both widespread and long-lived. Remains have been found in eastern Africa, eastern Asia, and possibly Europe, and they span a period from 1.9 million to 250,000 years ago. Because of this, there is a great deal of variability in the species’ fossil record, and the precise relationships between different populations are a matter of debate.

The Yunxian 3 skull is half-buried in an upright position. Researchers have uncovered the forehead, including the brow ridge and eye sockets, as well as the top, back and left cheekbone of the skull. It is not yet known whether teeth or a lower jawbone are attached to the skull, says Gao Xing at the Institute of Vertebrate Paleontology and Paleoanthropology in Beijing, who is leading the excavation.

Researchers have found Homo erectus remains at more than a dozen sites across mainland China. Vialet says that the ancient humans at Yunxian could be the ancestors of some of these populations, but their skulls bear distinct features that set them apart.

For example, fossils from around 700,000 years ago that were discovered in the Zhoukoudian cave system in suburban Beijing — known as the Peking Man Site — have a prominent sagittal keel, a crest that runs along the midline of the skull for the attachment of strong jaw muscles. The Yunxian skulls all seem to lack this feature, says Vialet.

Yameng Zhang, a palaeoanthropologist at Shandong University, says that the Homo erectus fossils found in China are highly variable and researchers don’t know why. It could be that each population evolved independently in Asia. Or they could have been the result of multiple waves of expansion out of Africa, he says. “More complete Chinese H. erectus like Yunxian 3 are crucial to answer this question.”

Vialet says that the Yunxian 3 skull should be compared with Chinese as well as European hominin fossils, such as the 1.4 million-year-old face from the Sima del Elefante cave in Atapuerca, Spain, discovered in July. She is currently comparing Yunxian 2 with European hominin fossils, and says that the Yunxian people could be more similar to European populations from the middle Pleistocene than they are to later specimens from China.

If the Yunxian 3 skull has teeth, especially molars, they could be useful for discerning evolutionary relationships with other early humans, says Clément Zanolli at the University of Bordeaux, France.

Once the Yunxian 3 skull is excavated, probably within the next few months, dating it will be an important task. Several techniques have been used to estimate the age of Yunxian 1 and Yunxian 2 at between 800,000 and 1.1 million years.

Wei Wang, a geochronologist at Shandong University, says that hominin fossils in China are often more difficult to date than fossils in Africa, because China lacks volcanic sediments that can be reliably dated by measuring the amounts of radioactive isotopes in the rock.

Jean-Jacques Bahain at the National Museum of Natural History in Paris dated sediments collected from the Yunxian site using electron spin resonance and uranium series dating3. This requires a close comparison between values taken from the fossil and the quartz in the sediment. But he says that the samples he measured weren’t collected at the same time and location as the Yunxian 1 and 2 skulls.

The discovery of Yunxian 3 therefore represents a unique opportunity to collect sediment samples from the ground that the skull sits in, he says.

Small animal fossils surrounding the Yunxian 3 skull are slowing the extraction process, according to Gao. Bahain says that such specimens could help to pinpoint the age of the Yunxian 3 skull, and also connect it to early human remains elsewhere in China that have been found with prehistoric fauna.