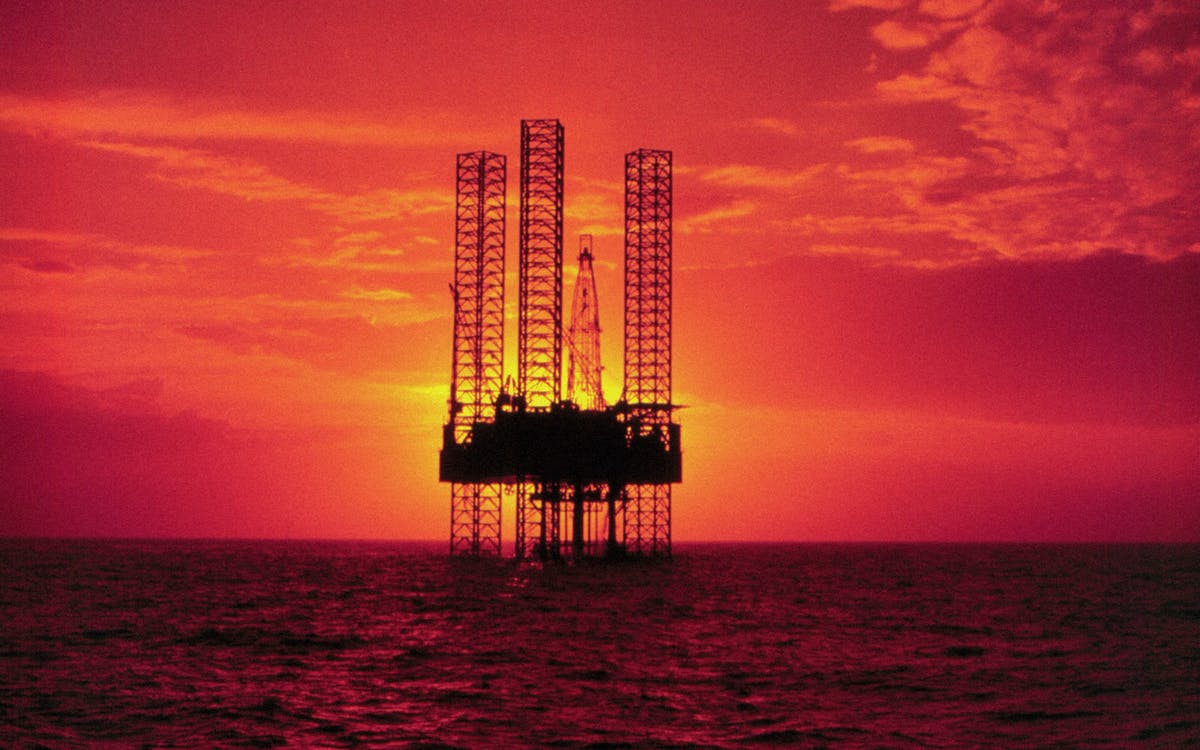 Nearly two hundred oil and gas platforms rise from Texas bays and state waters in the Gulf of Mexico. Most are decades old and decades past their prime. Some have been abandoned by owners who long ago gave up trying to squeeze a few more barrels out of them. These abandoned platforms can turn into expensive headaches. And while Texas approved their installation, the state government says it’s not obligated to tear them down after their owners have stopped taking care of them.

Aging pieces of fossil fuel infrastructure are prone to break and leak. Earlier this year, one such platform resulted in one of the worst Gulf oil leaks in recent memory—a harmful mess that has largely escaped attention from the public, environmental groups, and government oversight committees. The state knew for at fifteen years that the platform was in bad shape but never took steps to prevent the problem.

The leak was first noticed on March 2 by a fisherman puttering around in the Gulf, about five miles east of the entrance to the Padre Island National Seashore. He had motored up to the platform—which sits on four rusted legs about twenty feet above the water—in search of fish. Instead he found a trail of oil around the metal pipes that run down from the wellheads on the platform’s main floor. He pulled out his phone and called the EPA’s National Response Center. The agency notified the U.S. Coast Guard, who in turn called the Texas General Land Office, which oversees state coastal waters.

Three hours later, a state employee arrived on a 24-foot boat. He reported that condensate—a type of light crude oil used to manufacture diesel and jet fuel—was spilling from a corroded pipe, and so much natural gas was escaping that a loud hiss was audible. A Coast Guard helicopter flew by and spotted a two-mile-long sheen of petroleum snaking from the platform. It was anybody’s guess how long it had been leaking.

Neither government officials nor contractors could board the platform to shut down the leak, because it wasn’t structurally sound. It had been built in 1977, and the multiple wells connected to it produced a small amount of oil and gas for years. These wells were drilled by a subsidiary of Noble Energy, then were sold four times between 1993 and 2003, ending up with a small Houston company, VTEX Energy, which abandoned them in 2004. A Texas Railroad Commission inspection, in 2007, found that the platform was “in disrepair and unsafe to access without calm sea conditions.” The state fined the company $452,250 for failing to take care of its wells, but it is unclear whether it ever collected.

Ever since, the platform has sat exposed to salty air and to the storms that regularly roil the Gulf, without maintenance. The wells became “orphans,” a phrase the state uses to indicate when a company has left behind an unplugged well.

As the well continued to leak condensate and methane, the Railroad Commission of Texas—the state agency that is supposed to regulate the oil and gas industry but more often acts to advance its interests—lumbered into action. It struggled to find a contractor that could make the platform safe enough for workers to board in order to shut down the well. On April 8, more than a month after the leak was discovered, the spill was still evident. A General Land Office report noted the presence of “a rainbow sheen surrounding the platform and estimated the length of the sheen to be approximately 500 yards.”

The spilled oil wasn’t the sort of heavy, viscous crude that coats beaches and wildlife. Condensate is light and evaporates rather than lingering for long in the water. But the well’s leaking of a large quantity of methane—a potent greenhouse gas—likely had much greater effect. So much gas was escaping that it could be heard from a significant distance, according to state reports. “An audible hiss suggests a higher pressure and could easily produce significant emissions in a short amount of time,” says Colin Leyden, state political director of the Environmental Defense Fund.

The decrepit condition of the platform made it much harder and more expensive to fix the leak. By mid-April, the Railroad Commission secured a “jack-up” boat, which sailed up next to the platform and lowered its legs to the seafloor. This simultaneously raised the boat’s deck to the height of the platform, creating a steady structure from which workers could reach the leak. Total cost for the boat: $759,104. According to state records, the commission spent another $935,323 on contractors to fix the leak and plug the well it came from, which was only one of nine on the platform. The leak was brought under control on May 16, according to the Railroad Commission. “In general, offshore work is more complex given the working conditions,” a commission spokesman told Texas Monthly in a statement.

Why did the state let the platform and the wells deteriorate to a point where fixing the problem has turned into an expensive, months-long headache? The answer appears to be that no state agency is specifically required to repair old platforms. The Railroad Commission said it “does not have jurisdiction on the construction and maintenance of an offshore platform,” spokesman Andrew Keese wrote in an email. “The General Land Office has jurisdiction over offshore platforms.”

But the General Land Office told me that the rusty platform wasn’t its problem either. “The GLO has no statutory obligation to assume ownership of abandoned equipment in state waters,” wrote spokesman Matt Atwood. Texas law says the decision to “remove a facility or structure . . . is discretionary with the commissioner.” For the next few months, that is George P. Bush.

This well likely won’t be the last leaker in the state’s portion of the Gulf of Mexico. The Railroad Commission’s list of “orphaned” wells features 115 offshore wells, including the nine connected to the leaking platform, all of which were owned by VTEX. The last time anyone seems to have visited the platform was in July 2019, during inspections of the wells by the Railroad Commission that noted eleven rule violations. Seven were serious enough to be referred to headquarters for “possible” legal enforcement, but commission lawyers do not appear to have followed up. Efforts by Texas Monthly to reach federal officials, to determine if the leak violated any federal clean water or clean air regulations, were unsuccessful.

Plugging these wells has long been on the state’s to-do list, but its orphaned-well program has just as long been overwhelmed. About 8,000 abandoned wells in Texas need plugging—including those on both land and sea—with many more added to the list regularly. So while the state plugs about 1,500 wells each year, the number of those in danger of leaking has been growing, not shrinking.

To partially fund the orphaned-well program, Texas requires operators to post a bond. If they go bankrupt, the state can cash the bond and use it to pay to have the well plugged. Back in 2003, VTEX posted a $50,000 bond, which is all that was required under lenient state rules. The bond will end up covering a fraction of the state’s $1.7 million bill in dealing with the platform so far. VTEX appears to have gone out of business in the aughts, and efforts to reach former executives were unsuccessful.

The leaking well—and the broader problem of decaying offshore platforms that no company or agency takes responsibility for—nearly escaped broader attention. That changed because of Kelly Mitchell, a senior analyst with watchdog investigative group Documented, which is funded by charitable foundations. In April, she noticed an emergency $1.5 million request by the Railroad Commission to shut down the leaking VTEX well—a well she had never heard discussed during commission meetings. “I follow the Railroad Commission pretty closely, and I had not seen any public mention of a major offshore oil well leak, and started digging from there,” she told me.

Contractors plugged that leaking well on May 20. No one knows how much oil and gas were allowed to escape. Eight more VTEX wells feed into the platform. They all remain unplugged and could start leaking at any time. There are no plans to plug the wells or remove the platform, which continues to rot away just above the waters of the Gulf of Mexico.

Thousands remain without power in Florida after Hurricane Ian