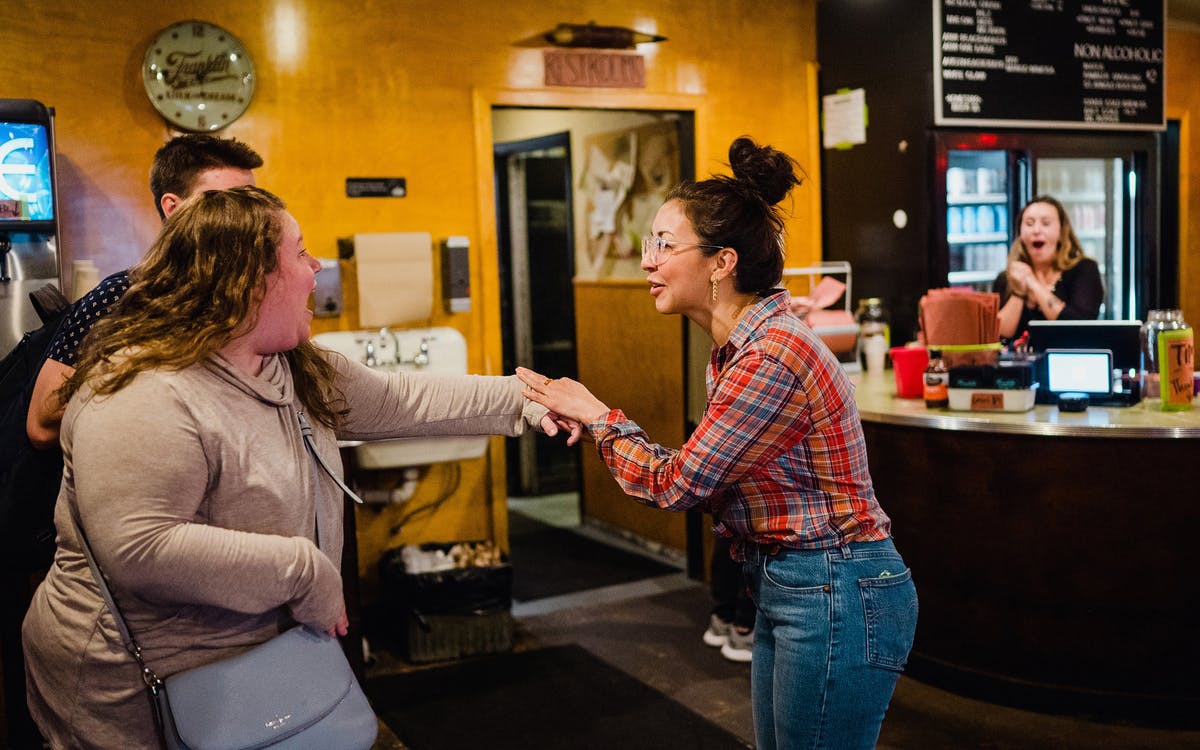 WHO: Matt McKinney and Kelly Dickey, barbecue fans who live in Indianapolis.

WHAT: A successful pit room proposal and a smoky engagement gift from the most famous barbecue joint in Texas.

WHY IT’S SO GREAT: Popping the big question is stressful enough. Add in a cross-country road trip, an hours-long barbecue line, and the raging heat of several fireboxes, and the pressure rises.

Matt McKinney and Kelly Dickey are journalists who live in Indiana and have a love for food and cooking. They were inspired to travel to Austin after watching the movie Chef, which stars Jon Favreau as—you guessed it—a chef who takes his talents on the road. One scene in the movie is set at Franklin Barbecue. That, plus Favreau’s The Chef Show on Netflix, in which he visits Franklin with L.A. chef Roy Choi, made dining at the joint a bucket-list item for the couple. A family wedding planned in Austin for late April gave them the perfect excuse to make the trip.

After six years of dating, Matt and Kelly had gotten used to jokes from friends and family about every upcoming trip being the trip: the one where he might finally put a ring on it. “I didn’t think he would on the Austin trip,” Kelly said. “And I certainly didn’t think he would in a pit room.” Neither did Matt, at first. But after he mapped out the route and marked all their barbecue destinations along the way, he thought, why not at Franklin? Six weeks before the trip, he called Franklin Barbecue to alert the team of his plans. Operations manager Claudia Hollern loved the idea and helped him schedule the surprise.

The visit to Franklin was all set up for April 26. The forecast showed rain, and the day prior Kelly asked Matt if they should reschedule. “No. I do not want to go another day,” Matt said, trying not to give anything away. They arrived at 8 a.m. to a little light drizzle, and were tenth and eleventh in line. An hour later, Matt faked a trip to restroom and confirmed with the manager on duty that everything was set. He got back in line with Kelly and told her they had been invited on a pit tour.

Austin photographer Caitlin McWeeney was waiting for them. Matt had booked her services, and she snapped away while Matt got down on one knee. Kelly didn’t hesitate in saying yes. They may have gotten a little smoke in their eyes, and definitely got some in their clothes. “We had to wash our clothes twice to get the smoke smell out,” Kelly said.

The staff loaded a massive tray of barbecue for the couple and wouldn’t accept any payment. Matt and Becky enjoyed the leftovers for days and shared them with family. After several barbecue stops on this long road trip from Indiana, they found a winner. “Franklin was by far the best,” Matt said. The couple admitted to some hesitance in rushing back to their (former) favorite local barbecue joints when they returned home, not knowing how they’d compare with the revelatory experience they’d enjoyed at Franklin.

This wasn’t the first nuptial event at Franklin Barbecue. A couple was married in line back in February 2016, but this was the first pit room proposal. Although the proposal happened in April, Franklin Barbecue posted a photo from the event to its Instagram account last week, garnering more than eight thousand likes from well-wishers.

Kelly said not to judge her fiancé for what seems like a rather manly choice of venue. “At first glance this probably doesn’t look like the most romantic proposal, but cooking had been a big hobby between the two of us,” she said. “It was a significant and creative way to honor our relationship and our common interests.”

The wedding is planned for April 28 next year. The reception will be catered by a barbecue joint, but they couldn’t get Franklin to come up to Indy. The couple plan to add a smoker to their wedding registry, so happily ever after is already a given.