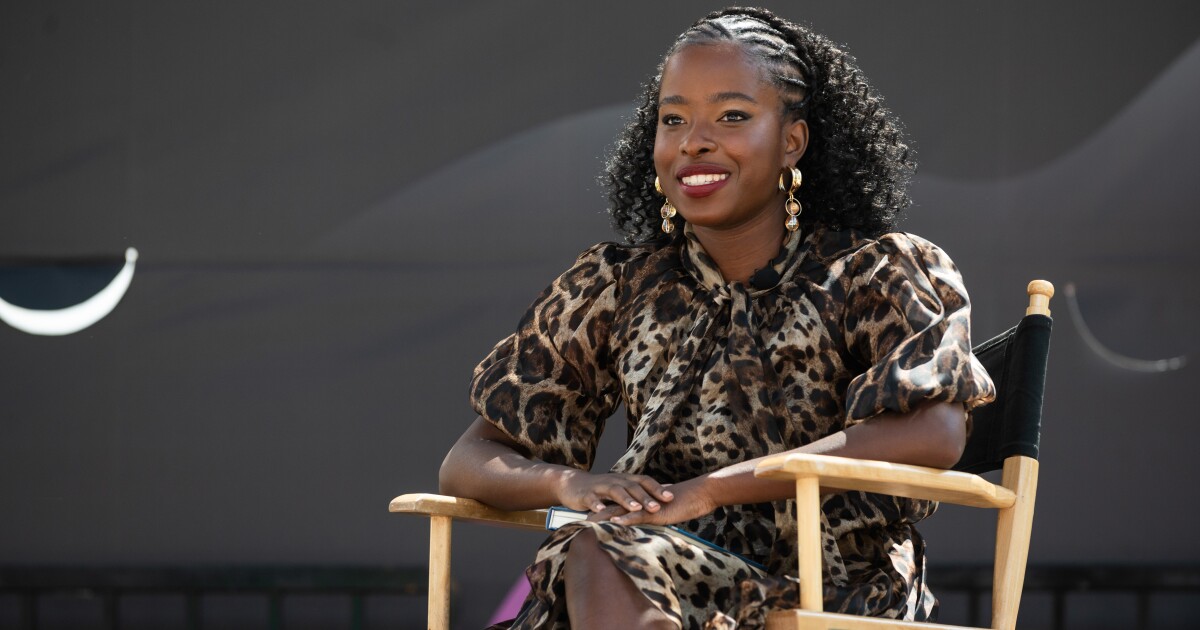 “Poetry can be like being stuck on the 405 in traffic,” she said. “You know where you’re going and you know you have to be there by 9 a.m., but are you going to make it? We don’t know.”

The audience roared a knowing laughter.

Gorman — the first American National Youth Poet Laureate, who burst onto the national stage last year after reciting a poem at President Joe Biden’s inauguration — was a headliner Saturday at the Los Angeles Times Festival of Books, where she shared a new poem with the crowd on the first day of the event.

Long before Gorman’s event began Saturday morning, every seat beneath a massive tent was packed, and people staked out spots on the grass nearby for a chance to hear the author read from “Call Us What We Carry,” her new collection of pandemic-era poems.

“This is literally my first, in-person poetry reading since the inauguration,” she said.

During their conversation, Gorman shared the names of several people who inspire her — authors Ocean Vuong, Elizabeth Acevedo and Clint Smith, among others — and spoke about how grief often serves as a conduit toward hope in her work.

“If I can enter this deep, dark place that also means I can reach the light,” said Gorman, who at one point told the crowd that she had attended the festival as a guest when she was 8.

A few minutes later, she read aloud from “Fugue,” a poem from her new collection — the piece, she told the crowd, narrates what the first year of the pandemic felt like:

There was another gap that choked us:

The simple gift of farewell.

Goodbye, by which we say to another—

Thanks for offering your life into mine.

By Goodbye, we truly mean:

Let us be able to say hello again.

Earlier in the day, director Carlos López Estrada, known for his indie breakthrough “Blindspotting,” held an event with several young poets who he worked with on his feature “Summertime,” a narrative film about spoken word storytellers from across L.A.

Gordon Ip, one of the artists featured in the film, recited a poem he wrote as an ode to Alhambra, his hometown.

“We are a fertile people, throw us in the dirt and we will grow without sun, without water, without permission,” Ip said. “Ask me if I’m going to the Lunar New Year Festival and I will respond, ‘Which one?’”

In the crowd, several people snapped their fingers in encouragement.

US forest chief calls for pause of prescribed fires in Southwest

At least one person killed, 23 injured in Michigan tornado