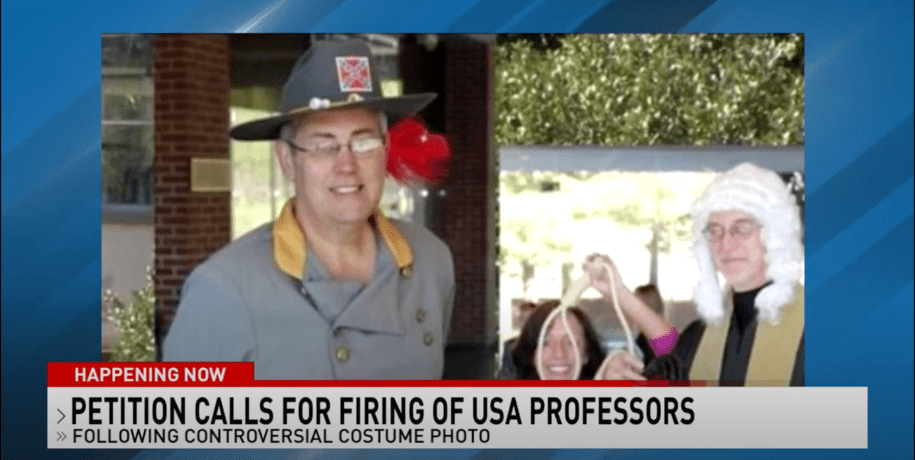 “We have pledged our full cooperation to Ms. Williams-Maynard in her investigation. The faculty members involved have been placed on administrative leave pending the outcome of the investigation and any related proceedings,” Waldrop said in a statement Friday.

“Along with the leadership of the University, I assure you that we are treating this situation with the utmost seriousness and with a commitment to acting upon the results of the investigation,” Waldrop added. “In the meantime, please join me in continuing our ongoing work to make the USA community one that proudly and steadfastly treats every person with respect and dignity.”

While the university has only placed the professors on paid leave while investigations continue, students have gathered together to call for the professors to be fired. At least two protests on campus occurred Friday, with students carrying signs that read “I don’t pay to employ racists” and “There is no excuse for holding a noose,” NBC 15 News reported.

Additionally, an online petition urging the university to terminate all three professors collected more than 3,000 signatures by Sunday. “The fact that these professors are still currently employed by the University shows a deep failure to commit to a safe, welcoming environment for students of all backgrounds,” the petition said. “Racism cannot simply be given a slap on the wrist. It must be addressed as the serious issue it is. We cannot have professors who partake in this kind of behavior.”

According to The New York Times, the photos in question are not new. The photos were once posted on the university’s Facebook page and were later deleted in 2020, without repercussions to the educators in question. In his statement Friday, Waldrop acknowledged this and noted that the university should have had a “stronger and broader” response to the photos in 2020.

“The actions taken in response to these pictures, which were brought to the attention of University leadership in 2020, should have been stronger and broader, and should have more clearly demonstrated our unwavering commitment to a safe and welcoming environment for every member of our community,” he said. “We acknowledge that, in our response to this incident, we failed in our obligations and responsibilities to our students, our employees and our community. For this, we are deeply sorry to everyone who is rightfully hurt and offended by these images.”

Following the announcement and calls for their termination, two of the three professors apologized in a post published on Inside Higher Ed. “Seven years ago, I rented and wore a last-minute costume that was ill-conceived to a faculty and student Halloween costume contest, at which I served on a panel of judges to select the winners,” Wood said. “I sincerely apologize and am sorry for doing so, and ask for forgiveness for this error in judgment.”

“In retrospect I can see why someone might find the image hurtful, and I regret this attempt at humor that clearly failed,” Sharland said. “It was not my intent to hurt or be offensive, and if anyone is offended by this picture I apologize.”

The photos, which can be seen in the online petition, are not only inappropriate and offensive but perpetuate ideas of white supremacy. Having professors who think it is okay to dress like this and post the photos online, especially on a college campus, makes one question the safety of Black students at the university.

While Wood and Sharland are regretful and have apologized for their actions, that does not excuse them. Their apology comes as a non-apology as they fail to acknowledge the history behind the symbols they used. For years the noose has been a symbol of America’s horrific history of lynching. According to the NAACP, more than 4,700 people were lynched in the U.S. between 1882 and 1968, of which almost 73% of them were Black. “The noose always means much more than a knot in a rope,” Jack Shuler, an associate professor at Denison University and author of The Thirteenth Turn: A History of the Noose, told CNN. “The noose was a tool used to kill people and, therefore, it is a threat — it is violent speech. The noose has become the new burning cross.”

Dressing up and taking photos with symbols that are known to be both hurtful and representations of hate is not funny. As academics, these professors should have known better and these actions cannot be ignored “Take professors – who are in the power to educate and be around students that have racist attributes or do racist things and think that is funny or cool – out of this university,” Jaylen Williams, a student, told WKRG-TV.