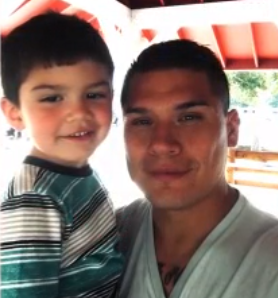 Jose Leos calls it a father’s intuition, the odd feeling he got that Friday morning last May.

“A loss of breath,” he said. “I felt anxiety, not even knowing what was going on at the time. I was at work.”

Two hours would go by before he got the dreaded news. His son 6-year-old Aiden had been killed in a road-rage incident on the 55 Freeway, riding in the back seat of his mother’s car. The loss continues to tear him apart.

Leos says he has kept his feelings private until now because he wanted to honor all that his little boy meant to him.

Leos plans to announce a nonprofit called Lions Share at a golf tournament next month. The goal is to financially help families who’ve been through the same loss.

“If we could get together and share resources one less thing they have to worry about,” he said.

The golf tournament is being organized by Calvary Chapel Academy where Aiden was a student. His father says that’s where his son blossomed.

Jose Leos wears this gold charm with the letter around his neck. But says his heart is where his son lives.

A man and woman charged in the shooting pleaded not guilty in the case.

Wynne Lee, 23, faces one felony count of accessory after the fact and one misdemeanor count of having a concealed firearm in a vehicle, according to the Orange County District Attorney.