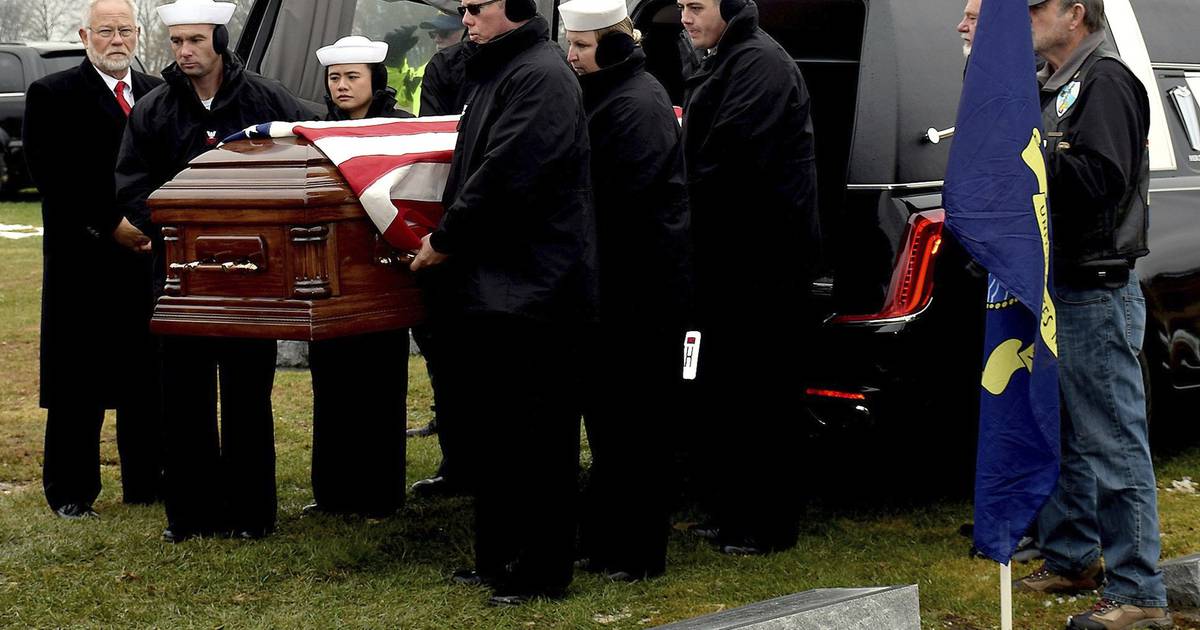 In a cemetery amid the cornfields of downstate Illinois last month, a military honor guard fired shots in salute before the remains of World War II veteran Keith Tipsword was lowered into the ground.

Tipsword, a machinist’s mate, was 22 when he died in the Dec. 7, 1941, attack on Pearl Harbor. In the wake of the attack, his body had never been identified, and was initially listed as missing in action, until the Navy recently identified his remains through DNA.

His sister, who was 5 years old when he died, and is now 86, vaguely remembers a man in uniform who visited their home in tiny Moccasin, Illinois, her son Greg Sapp said.

“My mom said their mother always had an expectation the door would open and Keith would be there,” Sapp said. “She never thought he wouldn’t come home. Well, now he finally has.”

With his burial in November, Tipsword is among dozens of Pearl Harbor veterans who have been identified and brought home to be reburied with loved ones. Through new DNA techniques, the Defense POW/MIA Accounting Agency has been able to sort through remains that were long considered unidentifiable.

When Japan mounted the surprise attack on Pearl Harbor in Honolulu, Hawaii, Tipsword’s ship, the USS West Virginia, was hit by torpedoes and bombs and sunk. The explosions rendered many of the victims impossible to name.

They were buried in mass graves and labeled as “unknown” in a cemetery located in a crater known as the Punchbowl on the island of Oahu.

In 2015, the federal government began matching the remains to DNA from family members of service members who were missing or killed in action. The program has identified hundreds of missing service members from around the world who served in World War II, Korea and Vietnam.

Tipsword’s family lived in tiny Moccasin in Effingham County. Their house was just a mile from the cemetery, but is long gone, with only a silo remaining. The family still has a salt-and-pepper shaker set that Tipsword made aboard his ship and brought home to his mother while visiting.

The Patriot Guard motorcycle group escorted Tipsword’s casket from a military base in the St. Louis area to Effingham, with firetrucks on overpasses and bystanders saluting, Sapp said. Many members of the local Veterans of Foreign Wars, American Legion and Disabled American Veterans attended. Sailors folded the American flag on the casket and presented it to Tipsword’s sister.

“It was pretty moving,” said Sapp, a news director for local radio stations.

Tipsword wasn’t the only Illinois veteran identified through DNA. The remains of Herbert Jacobson, 21, of northwest suburban Grayslake, were recently identified, and his family, some of whom now live in North Carolina, chose to have him buried at Arlington National Cemetery in Virginia.

The night before the attack, Jacobson had worked running boats from the USS Oklahoma to the dock, according to his nephew, Bradley McDonald. After his shift, he filed a report, got a meal and retired to sleep in his bunk. That’s where he likely died when the ship was hit by torpedoes, capsized and sank, trapping hundreds of men below decks.

Their bodies were not recovered until the ship was raised much later. He was identified in 2019, but reburials were delayed by the COVID-19 pandemic. Jacobson was laid to rest at Arlington in September.

McDonald’s father was a friend of Jacobson’s in boot camp at Great Lakes Naval Station north of Chicago. The father met Jacobson’s sister during a visit to their home in Grayslake and eventually married her. They’ve since passed away, never knowing what became of Jacobson’s remains. McDonald, who himself later served as a staff sergeant in the Air Force, said his uncle had considered his assignment in Hawaii like going to paradise.

Before Jacobson’s reburial, the family placed a few mementos in his casket — a USS Oklahoma baseball cap, a handkerchief from Jacobson’s mother with the aroma of her perfume and a photo of their home in Grayslake.

“I was overwhelmed,” McDonald said. “We’ve been waiting for this for a long time.”