After dirty hit on Avalanche center Nazem Kadri, a suspension and warm seat in hockey Hades should await Evander Kane 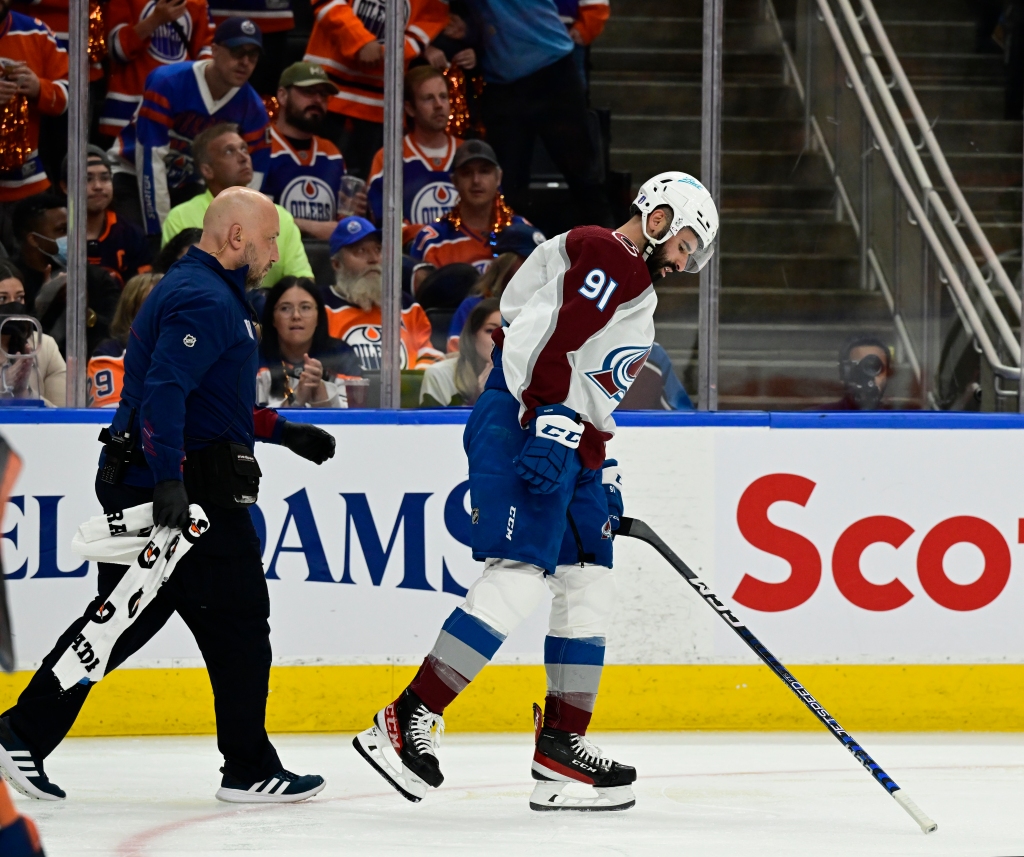 Will somebody give the Avs a broom, so they can sweep away Edmonton from the NHL playoffs and take Oilers rogue Evander Kane out with the trash?

Kane is a stain on the game of hockey. The kind that requires bleach and a wire brush to scrub the stink from the ice.

What Kane did to Nazem Kadri, slamming the Avalanche center into the boards with obvious intent to injure, fits the modus operandi of a scoundrel that has been known to flash a fake COVID-19 vax card and has been accused of welching on a stinking pile of gambling debts.

“The hit, it’s the most dangerous in hockey,” Colorado coach Jared Bednar said late Saturday after the Avs beat Edmonton, 4-2, to take a 3-0 lead in the Western Conference finals. Kane “hit him headfirst from behind, eight feet away from the boards.”

That the NHL should suspend Kane for no less than two games is a no-brainer. The real brain-twister is why Kane would be employed by a team in a city that loves hockey as much as Edmonton does.

Unable to beat the Avs, Kane has resorted to trying to hurt anyone in a Colorado sweater that gets in his way. His calling card is mayhem. It’s dangerous to ever turn your back on a hockey player devoid of scruples.

“Obviously, it’s a huge loss,” said Bednar, who doesn’t expect Kadri back in the lineup anytime soon. “He’s out. He’ll be out for this series at least … if not longer.”

It only took 66 seconds into Game 3 for Kane to lose his mind. With Kadri collecting the puck beyond the end line to the glove side of Edmonton goalie Mike Smith, Kane teed up his foe and delivered a dirty crosscheck into the Avs center that sent Kadri sprawling, with his left shoulder smashing into the boards.

“I don’t like it,” said Avalanche captain Gabe Landeskog, who witnessed Kane’s cheap shot from the Colorado bench.

Those nasty hits are inexcusable, “ones that give you chills down the spine,” Landeskog added. “You’re taught from a young age you don’t do that.”

Kadri was painfully slow to get up. In obvious discomfort, he went immediately to the Avalanche dressing room and did not return to action.

Hockey is a tough sport of brave men proud of their crooked noses and unafraid to spit chiclets. But who raised Kane to disrespect foes?

He was given a five-minute major penalty for boarding Kadri. This wasn’t a hockey play. It was a premeditated assault.

If the NHL has an ounce of common sense, the league office will suspend Kane for nothing less than two games, for no other reason than to prevent Kane from hurting somebody else on an Avalanche team that’s on the quest for the Stanley Cup.

The Avalanche so frequently dominated the run of play that Game 3 could’ve been a laugher if not for Smith. The Edmonton goalie was a walrus, flopping on the ice, throwing every inch of his body in front of the Colorado shots, robbing Andrew Cogliano and Landeskog with head-shaking saves so spectacular it could make a man say: coo coo ca choo.

But the hockey gods do take notes. There’s a warm seat waiting in hockey Hades for Kane.

He is playing for Edmonton on a one-year, $2.1 million deal because San Jose waived the veteran forward after he was busted and suspended by the league office in October for carrying a fake COVID vax card. He has filed for bankruptcy, citing over $1 million in gambling debts and has been accused of abuse from women in his life.

So maybe it was justice that the game-winning goal was scored by J.T. Compher, who filled in admirably centering the second line in the absence of Kadir. Compher jumped out of the penalty box, hopped on a loose puck and beat Smith for the score that broke a 2-2 tie with seven minutes, 18 seconds remaining in the third period,

“We’re going to need (Compher) going forward to be a difference-maker,” Nathan MacKinnon said during the postgame news conference with reporters.

His name is Kane, which rhymes with stain. If he’s on the ice again this season, it will leave a stain on the NHL playoffs.