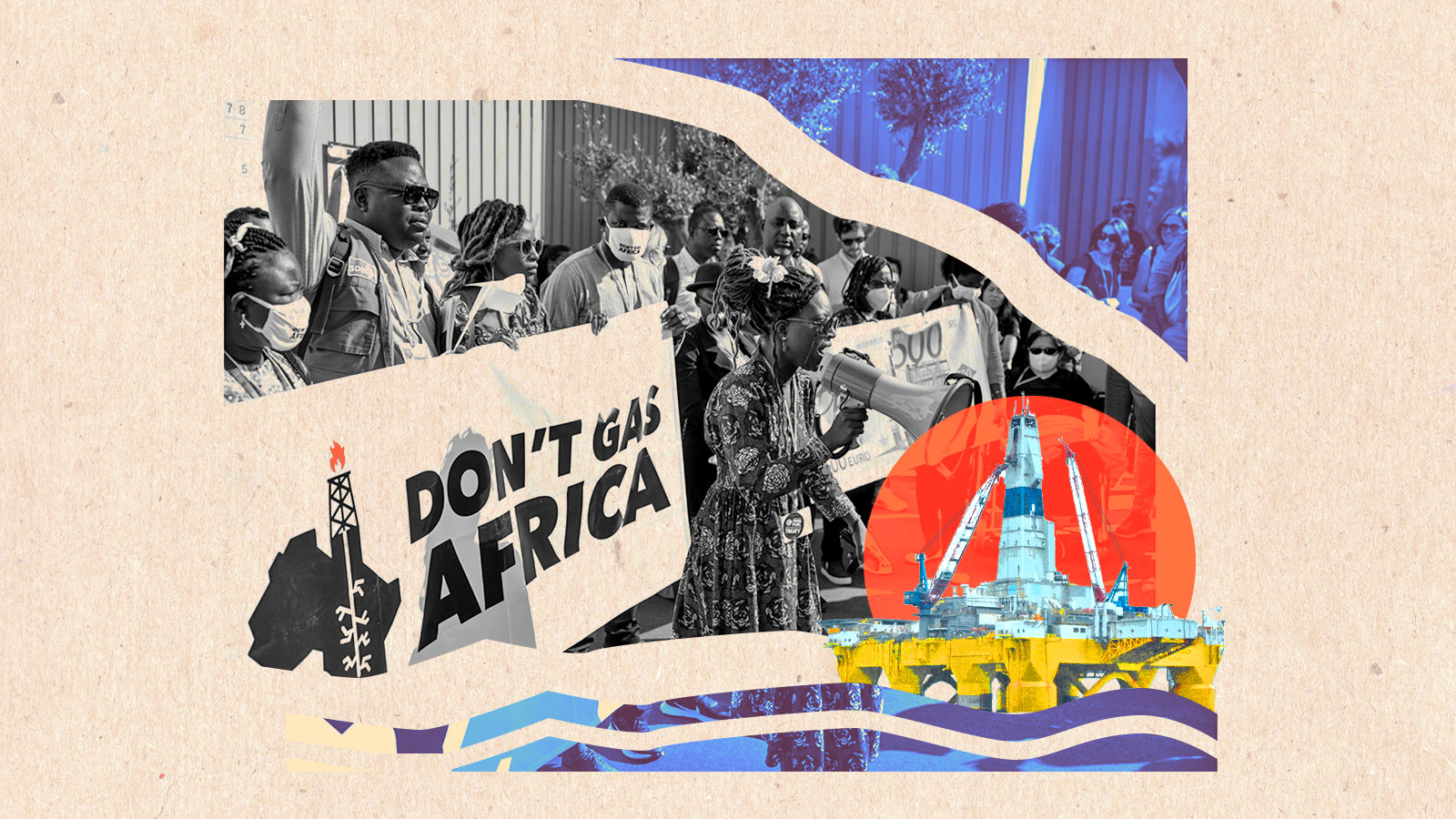 When an American oil company discovered a massive natural gas reserve off the coast of Mozambique in early 2010, the country appeared poised for a brighter future. After more than a decade of relying on foreign aid to recover from a bloody civil war, here was an opportunity to gain financial independence. Government officials celebrated Anadarko Petroleum’s discovery, declaring that revenues from the extracted fuel would help transform Mozambique, one of the world’s poorest countries, into a middle-income nation with robust health care and education.

But the years that followed brought a series of crushing disappointments. A corruption scandal sunk the country into economic and political turmoil and an insurgency swept through the oil-rich Cabo Delgado province, destroying schools and hospitals and displacing thousands. It all happened before a single ounce of gas was shipped for export.

Today, Mozambique is still hoping to use its fossil fuel resources to develop its economy, a story that has played out across the continent, often to disastrous effects. From the vast deserts of Algeria to the delicate peatlands of Namibia, hundreds of mostly foreign-owned corporations are exploring new fuel reserves, prompting claims that the continent will become oil’s “final frontier.” But if the world is to limit global temperatures to 1.5 degrees Celsius above pre-industrial levels, no new oil and gas infrastructure can be developed, according to the International Energy Agency. Even as oil giants like Shell and TotalEnergies set up shop in Namibia and Angola, a wealth of recent research has demonstrated that Africa also has immense, largely untapped potential for renewable energy. Despite pleas from environmental advocates across the continent to pursue this path instead, governments have held tight to the idea that tapping fossil reserves is essential for expanding their economies, reducing poverty, and providing power to millions of Africans.

“Africa wants to send a message that we are going to develop all of our energy resources for the benefit of our people because our issue is energy poverty,” said Maggy Shino, Namibia’s petroleum commissioner, in an interview with Reuters at the United Nations Climate Conference in Sharm el-Sheikh, Egypt, last month.

With 89 percent of the liquified natural gas from the new infrastructure slated for export to Europe, some advocates have questioned how far these projects will actually go toward increasing electricity access for ordinary Africans. More troublingly, a growing body of research suggests that rather than serving as a boon for development, major fuel discoveries tend to spawn corruption and economic instability in countries that lack strong financial institutions and legal systems. This, experts told Grist, is what happened in Mozambique, where the promise of economic growth led to rapid increases in borrowing and sparked violence over access to resources before they ever left the ground.

Lars Burr, a professor of political economy at Roskilde University in Denmark, said that Africa’s colonial history and its relatively small contribution to climate change make drilling for fossil fuels on the continent a question of fairness. “There’s an environmental justice case for African governments being able to consume certain amounts of coal, gas, and oil in order to develop their countries. That’s one side of it.” The other side, he said, is how much these countries are really getting from developing their oil and gas industries. “That’s a difficult one, because the track records are poor.”

For decades, academics have been studying the “resource curse,” a phenomenon in which countries endowed with abundant natural resources wind up with worse social and economic outcomes after they cash in. This “paradox of plenty” has been seen across Africa, particularly in the continent’s two largest oil-producing states. In the early 2000s, billions of dollars in revenue from deepwater exploration off the coast of Angola went missing after government elites siphoned the funds away from a population that lacked basic public services after decades of civil war. In Nigeria, weak regulations have enabled a quantity of oil equivalent to 50 Exxon Valdez disasters to spill into farms, forests, and rivers, devastating the environment and nearby towns.

What can explain the apparent paradox, this riches-to-rags story? Scholars have pointed out that governments hungry to cash in on major fuel discoveries tend to pull resources away from other vital sectors of the economy such as agriculture, thereby constricting their development. Another explanation points to weak financial institutions, regulatory agencies, and legal systems that fail to stave off corruption and protect against environmental abuses. While these patterns have been observed in many oil-rich nations across Africa and the world, experts emphasized that political conditions, not wealth of natural resources, are what determine whether discoveries will cause more harm than good.

“Resources by their nature are not a curse,” said Erik Katovich, a postdoctoral scholar at the Institute of Economics and Econometrics at the University of Geneva in Switzerland. However, “if a country already deals with conflict or corruption or instability, throwing millions of dollars in oil revenues into the mix is only going to exacerbate any sort of institutional weaknesses that you already have.”

More recent research suggests that these effects are not only reserved for the period after governments receive windfalls from fossil fuels. In what’s called the “presource curse,” the anticipation of oil and gas revenues may engender corruption and lead governments to prematurely restructure their economies and pile on debt.

After Anadarko made its first natural gas discovery in the deep waters of Mozambique’s Rovuma Basin in 2010, billions of investment dollars poured into the country’s Cabo Delgado province, a remote, forested region near Mozambique’s northern border with Tanzania. As oil giants such as ExxonMobil and France’s TotalEnergies rushed to find and develop new fuel reserves, government officials in the capital Maputo took out $2 billion in secret loans to start companies that would provide shipyard services and security for these oil and gas companies. After news of the scandal broke in 2016, the International Monetary Fund suspended financial assistance to Mozambique, sparking an economic crisis that saw the national currency lose a third of its value. The following year, an outbreak of violence in the oil-producing province was quickly linked to the government’s lucrative deals with foreign firms.

The turmoil following Anadarko’s discovery was “a matter of governance,” said José Macuane, a professor of political science at the University Eduardo Mondlane in Maputo. “You have institutions that are not able to address aspirations for development.”

Despite authoring a paper that explores the “presource curse” in Mozambique, Macuane isn’t quick to discount the potential benefits of fossil fuel extraction in the country’s north, where the government started exporting natural gas from last month. Selling this gas, he reasoned, could help Mozambique eventually shift to renewable energy and catch up with the rest of the world without relying on foreign aid. (Roughly 40 percent of the population has access to electricity. Although officials have promoted solar power in rural areas, it accounts for less than 1 percent of the country’s total energy supply.)

Such a prospect, he admitted, is challenging given the state of the country’s government, which is still reeling from violence in the north and the decade-old corruption scandal that tanked the economy.

Nonetheless, Macuane expressed frustration with climate activists, particularly those from the West, who he characterized as pushing for a moratorium on fossil fuel extraction in Africa without sufficiently reckoning with the economic reality that many developing nations face.

“Just because we had a case of presource curse, I don’t think we should abandon our natural resources,” he said. “For us to catch up to technology, human capital, and to make a transition, we need resources. Which will be the country to fund it?”

Countless experts have warned about the perils of relying on fossil fuel resources given their unpredictability in global markets. Katovich said that petrostates, nations that depend on fossil fuel exports, risk financial trouble when events such as the coronavirus pandemic and Russia’s invasion of Ukraine roil oil and gas markets.

“If your economy is too dependent on natural resources, you’re exposed to a lot of volatility which is out of your control, driven by world events beyond your borders,” he said. Such price swings make it hard for governments to carry out long-term social welfare plans like funding schools and building new electrical grids — even if they wanted to.

In a world that is starting to look beyond fossil fuels, this uncertainty around their future value is the biggest challenge facing petrostates. The falling cost of developing renewables has challenged the notion that natural gas could be used as a “transition fuel” in coal-reliant countries like India and Germany. A study published in May found that it is now more economical for countries to switch straight from coal to renewables instead of importing gas from abroad. Last year, the Carbon Tracker Initiative, a London-based think tank, reported that fossil fuel-producing countries could see their oil and gas revenues tank by more than 50 percent over the next two decades.

That’s why African climate activists are calling on their governments to stop investing billions in infrastructure that might not serve them several decades from now. But at the annual United Nations climate conference in Egypt last month, those demands largely fell on deaf ears, said Dean Bhebhe, a South Africa-based climate activist with the Don’t Gas Africa campaign.

“We got to a point where climate activists were labeled as anti-development,” Bhebhe told Grist. “Our argument was essentially that Africa has every right to develop, but because of the history of ‘extractivism’ of coal and oil, surely fossil fuel production does not provide the answer to improved socio-economic [conditions] across Africa. Development needs to center human rights.”

Campaigners with climate justice organizations like Don’t Gas Africa and Power Shift Africa point out that many African countries could be rich with renewable power. The IEA estimates that Africa holds 60 percent of the world’s solar power potential but only 1 percent of its generation capacity. A separate analysis from the International Finance Group found that much of the continent’s wind is faster than 8.5 meters per second, making it ideal for wind farms. The report also identified significant wind capacity in Mozambique, Nigeria, and other countries. While these forms of alternative energy are cheaper to develop than liquid natural gas pipelines and offshore oil rigs, they still require money that many developing countries don’t have.

The outcome of last month’s U.N. climate summit could help address that. In a historic agreement that has been hailed as a major win for the global climate justice movement, wealthy nations agreed to create a loss and damage fund that will provide financial support to countries that have historically contributed little to climate change but suffer deep economic losses as a result of it. In addition to offering resources for disaster recovery in places like Pakistan, where historic floods recently submerged a third of the country, the fund is meant to help developing nations construct green infrastructure that they would otherwise be unable to afford.

Bhebhe said the fund is a step in the right direction, but added that until certain details are ironed out, including which countries will receive financing and how it will be distributed, it can only be considered a win on paper. Green financing without also abandoning fossil fuel extraction on public lands is “like being in a bathroom with a tub filling up with water and instead of turning off the tap, you’re like ‘We’ll buy more mops!’”

Cleaning up PFAS is costly and messy — ask this Wisconsin town.