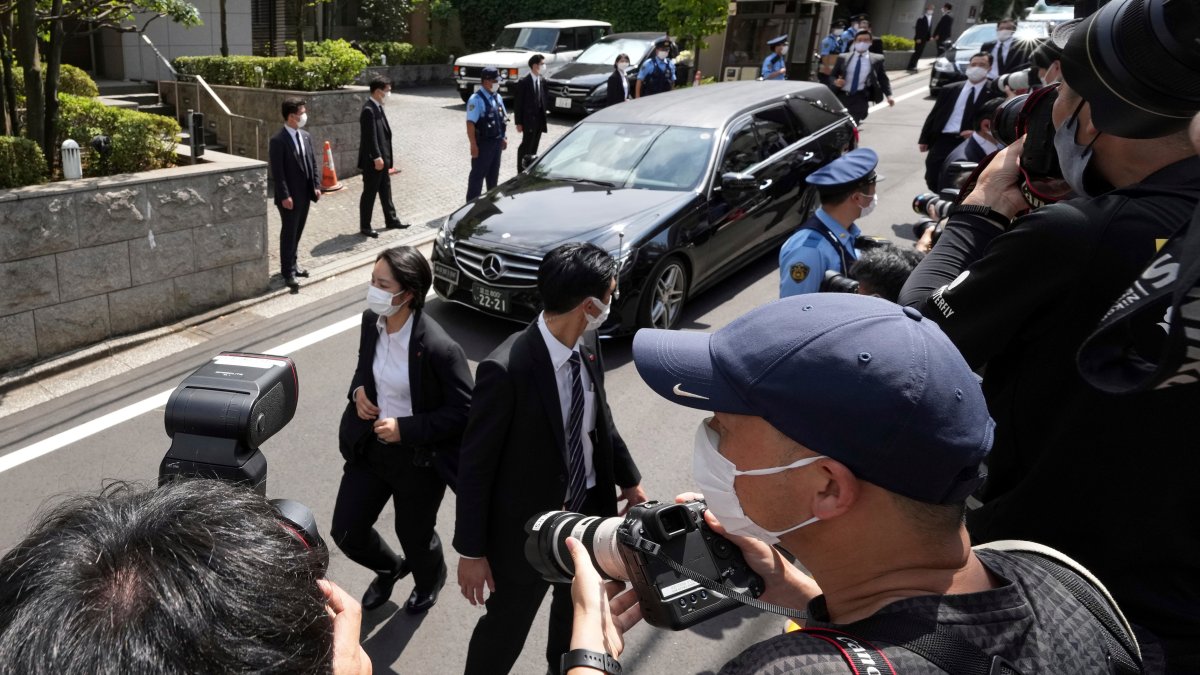 The body of Japan’s former Prime Minister Shinzo Abe was returned to Tokyo on Saturday after he was fatally shot during a campaign speech in western Japan a day earlier.

Abe was attacked in the city of Nara and airlifted to a local hospital but died of blood loss despite emergency treatment including massive blood transfusions. Police arrested the attacker, a former member of Japan’s navy, at the scene on suspicion of murder. Police confiscated the homemade gun he used, and several others were later found at his apartment.

A black hearse carrying Abe’s body and accompanied by his wife, Akie, arrived at his home in Tokyo’s upscale residential area of Shibuya, where many mourners waited and lowered their heads as the vehicle passed.

Abe’s assassination ahead of Sunday’s parliamentary election shocked the nation as a threat to democracy and raised questions over whether security for the former prime minister was adequate.

Even though he was out of office, Abe was still highly influential in the governing Liberal Democratic Party and headed its largest faction, but his ultra-nationalist views made him a divisive figure to many.

When he resigned as prime minister, Abe blamed a recurrence of the ulcerative colitis he’d had since he was a teenager. He said then it was difficult to leave many of his goals unfinished, especially his failure to resolve the issue of Japanese abducted years ago by North Korea, a territorial dispute with Russia, and a revision of Japan’s war-renouncing constitution.

That ultra-nationalism riled the Koreas and China, and his push to create what he saw as a more normal defense posture angered many Japanese. Abe failed to achieve his cherished goal of formally rewriting the U.S.-drafted pacifist constitution because of poor public support.

Loyalists said his legacy was a stronger U.S.-Japan relationship that was meant to bolster Japan’s defense capability. But Abe made enemies by forcing his defense goals and other contentious issues through parliament, despite strong public opposition.

Abe was groomed to follow in the footsteps of his grandfather, former Prime Minister Nobusuke Kishi. His political rhetoric often focused on making Japan a “normal” and “beautiful” nation with a stronger military and bigger role in international affairs.

Japan is particularly known for its strict gun laws. With a population of 125 million, it had only 10 gun-related criminal cases last year, resulting in one death and four injuries, according to police. Eight of those cases were gang-related. Tokyo had no gun incidents, injuries or deaths in the same year, although 61 guns were seized.

Abe was proud of his work to strengthen Japan’s security alliance with the U.S. and shepherding the first visit by a serving U.S. president, Barack Obama, to the atom-bombed city of Hiroshima. He also helped Tokyo gain the right to host the 2020 Olympics by pledging that a disaster at the Fukushima nuclear plant was “under control” when it was not.

He became Japan’s youngest prime minister in 2006, at age 52, but his overly nationalistic first stint abruptly ended a year later, also because of his health.

The end of Abe’s scandal-laden first stint as prime minister was the beginning of six years of annual leadership change, remembered as an era of “revolving door” politics that lacked stability.

When he returned to office in 2012, Abe vowed to revitalize the nation and get its economy out of its deflationary doldrums with his “Abenomics” formula, which combines fiscal stimulus, monetary easing and structural reforms.

He won six national elections and built a rock-solid grip on power, bolstering Japan’s defense role and capability and its security alliance with the U.S. He also stepped up patriotic education at schools and raised Japan’s international profile.