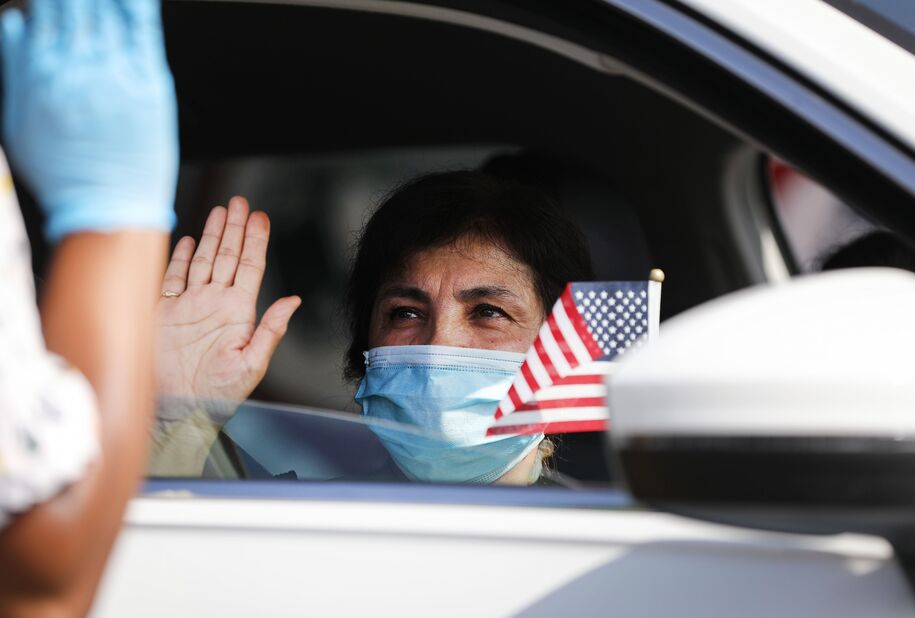 Amazing piece by Eric Cantor, former House leader: “Many of my fellow politicians won’t tell voters the truth. The result was Jan. 6.” https://t.co/0AEaubzKct

Betraying Your Church—And Your Party

How Representative Adam Kinzinger, an evangelical Republican, decided to vote for impeachment—and start calling out his church

Kinzinger is not a pastor or a theologian. He knows his job as a representative is not to preach the gospel but to represent his constituents and vote on legislation. When he’s dead, however, it won’t matter how many elections he won, or how low America’s tax rates are. The Lord has been speaking to him about his role as a Christian in politics, he said, and how he can reach people who are thinking about their eternal life. He has concluded that his faith and his party have been poisoned by the same conspiracy theories and lies, culminating in the falsehood that the election was stolen. When you look at “the reputation of Christianity today versus five years ago, I feel very comfortable saying it’s a lot worse,” he said. “Boy, I think we have lost a lot of moral authority.”

But people like Kinzinger have not been the ones shaping the reputation of Christianity in America over the past four years. Trump’s supporters have. Even after everything that’s happened—Trump’s attempt to overturn the election, his cheerleading for the attack on the Capitol—some influential evangelical leaders are still defending the president: “Shame, shame,” Franklin Graham, the evangelist and son of the famous pastor Billy Graham, wrote about the 10 Republicans who voted for impeachment. “It makes you wonder what the 30 pieces of silver were that Speaker Pelosi promised for this betrayal.” In the metaphor, the Republican dissidents are cast as Judas, who is said to have betrayed Jesus in exchange for 30 coins. Trump plays the role of Christ.

Looking to political personalities rather than Jesus for salvation is the worst kind of mistake a Christian can make, Kinzinger said. “There are many people that have made America their god, that have made the economy their god, that have made Donald Trump their god, and that have made their political identity their god.” The problems that led to the January 6 insurrection are not just political. They’re cultural. Roughly half of Protestant pastors said they regularly hear people promote conspiracy theories in their churches, a recent survey by the Southern Baptist firm LifeWay Research found. “I believe there is a huge burden now on Christian leaders, especially those who entertained the conspiracies, to lead the flock back into the truth,” Kinzinger tweeted on January 12.

Donald Trump was cultivated as a Russian asset over 40 years and proved so willing to parrot anti-western propaganda that there were celebrations in Moscow, a former KGB spy has told the Guardian.

Yuri Shvets, posted to Washington by the Soviet Union in the 1980s, compares the former US president to “the Cambridge five”, the British spy ring that passed secrets to Moscow during the second world war and early cold war.

Now 67, Shvets is a key source for American Kompromat, a new book by journalist Craig Unger, whose previous works include House of Trump, House of Putin. The book also explores the former president’s relationship with the disgraced financier Jeffrey Epstein.

“This is an example where people were recruited when they were just students and then they rose to important positions; something like that was happening with Trump,” Shvets said by phone on Monday from his home in Virginia.

No, but I remember when you & I served in Congress together and we took an oath to defend the Constitution against all enemies, foreign & domestic. https://t.co/jJRsVPI1Cy

In other news, Marjorie Taylor Greene is the face of the GOP. She’s a nutter, elected by her constituents. Until or unless the Congress chooses Liz Cheney over Greene it is what it is, and perfectly appropriate to see them (Greene and the GOP) as one and the same.

“A number of [GOP] members of Congress have links to organizations and movements that played a role in the Jan. 6 assault on the Capitol.”

The Vileness of Marjorie Taylor Greene

The video — along with new CNN reports about Greene’s troubling social-media activity prior to her election — has prompted many Democrats and a few Republicans to call for Greene’s resignation, though GOP leadership has yet to act in any meaningful way. Greene, for her part, did not apologize or walk back her claims, saying that at the time of the video she was “going from office to office in the Senate to oppose the radical gun control agenda that David Hogg was pushing.”

The video is just the latest example of the loathsome conduct of a woman now tasked with helping shape education and labor policy in the U.S. Below, examples of some of Greene’s most troubling behavior.

Trump’s presidency was marked by low, stable approval ratings. Polls on Biden’s first days in office show him starting off with a higher ceiling and potentially broader base of support.https://t.co/BPRhVRTFye

I called Arizona for Biden on Fox News. Here’s what I learned

In my career as a political analyst and, until my firing last week, an election forecaster on the decision desk at Fox News, I have always been with [Erastus] Brooks. I wanted to steam downriver as fast as I could to be first with the news to beat the competition and serve my audience.

Having worked in cable news for more than a decade after a wonderfully misspent youth in newspapers, I can tell you the result: a nation of news consumers both overfed and malnourished. Americans gorge themselves daily on empty informational calories, indulging their sugar fixes of self-affirming half-truths and even outright lies.

Can anyone really be surprised that the problem has gotten worse in the last few years?

As Baragona explained in an interview with Vox, it’s not a coincidence that Fox News’s ratings decline coincided with the disappearance of Trump’s Twitter account, which the former president used relentlessly to promote his favorite Fox opinion hosts and denigrate their competition. And now, without the backing of one of its most influential fans, the network has been left to chart its way through an uncertain future.

“We don’t know how much right-wing grievances will work, how much basically stoking outrage will work,” Baragona said. “It worked during the Obama years, and that’s the formula they’re trying to replicate right now. But we just got through with a Trump era, and now the guy who helped trumpet [and] amplify them on Twitter, he’s gone now. His Twitter account’s gone. And many of his fans are not coming back, so it just remains to be seen.”

NO SEVERE disease reported 49 days after vaccination. This is POTENTIALLY HUGE.

85% effective overall for severe disease, but antibodies BUILD over time. 2/

Tokyo Olympics: Can vaccines save the Games?

“I think a lot of people had this vested belief that once the vaccine started to roll out, that would really spell the end of Covid and what we would see is that transmission rates would start to plummet, things would get more controlled and we would have some ability to go back to a more normal lifestyle,” Jason Kindrachuk, an infectious disease expert at the University of Manitoba in Canada, tells CNN Sport.

“The fact is that even with good vaccine rollouts in a number of regions of the world, we’re having trouble getting a hold on transmission.”

The GOP’s whining about Biden is absurd. Good thing Democrats are ignoring it.

Until we know that 10 GOP senators are willing to support something remotely close to what Biden and Democrats want, there simply isn’t anything to talk about. What’s the Republican plan? There isn’t one. With whom are Democrats supposed to negotiate? Over what, exactly?

Let’s go out on a limb and suggest that Republicans would like to keep it this way for as long as possible. They want the public debate to unfold in a place where they get to refrain from saying what they’re for — that is, refrain from saying what they’re prepared to concede to Democrats — while simultaneously attacking Democrats for not being willing to concede enough to them.

Headlines focus on the 66% overall efficacy. But the big deal is that the single-dose vax was 100% effective against severe disease after day 49, and 85% effective by day 28.