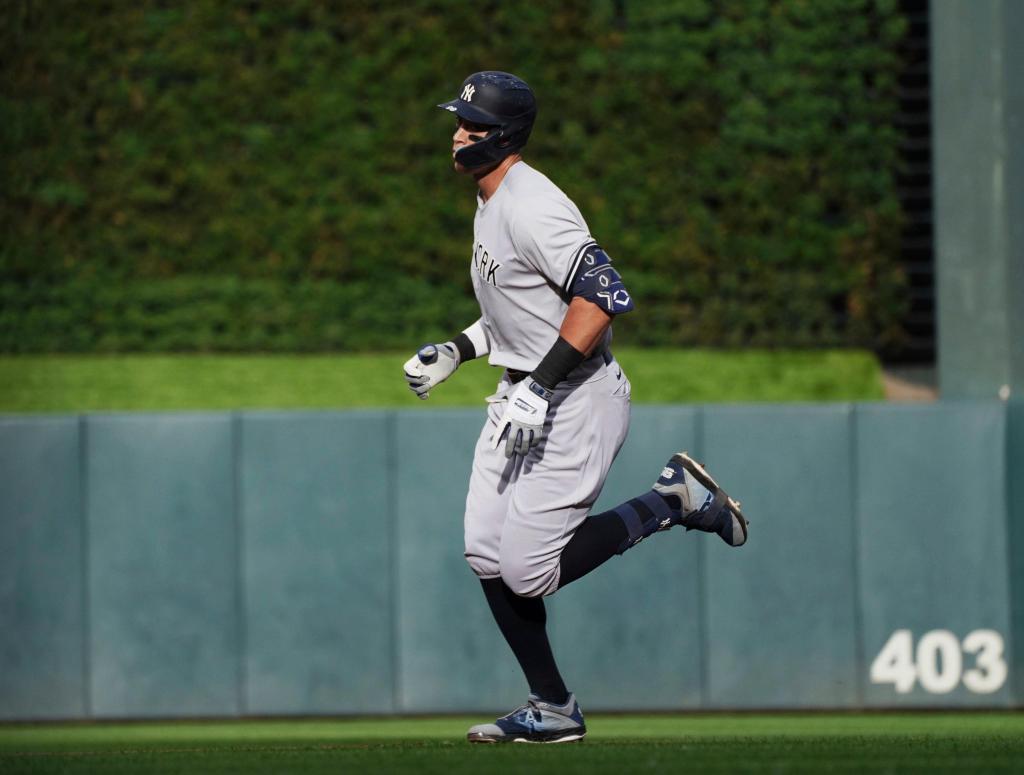 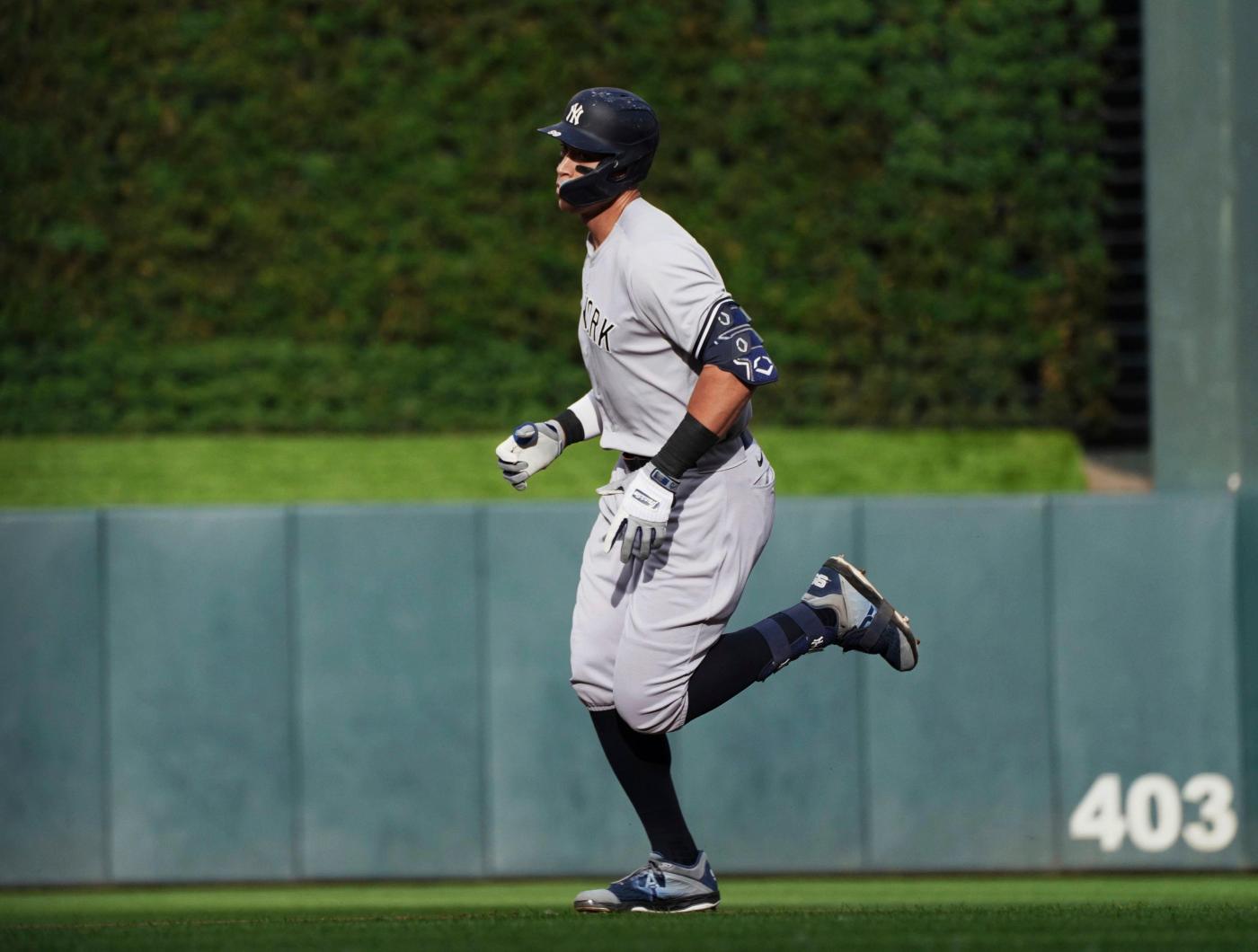 MINNEAPOLIS — Their run of outstanding pitching couldn’t last forever. The defense, which has been so solid this season, had an off night. So the Yankees did exactly what they were built to do on nights like Tuesday — they powered through. With home runs from Aaron Judge, Giancarlo Stanton and Anthony Rizzo, the Bombers beat the Twins 10-4 at Target Field.

“I mean, we’ve been saying it all year: we can win in a lot of different ways. And that’s just another one of those examples. I didn’t get my job done but the rest of the bullpen and the offense definitely got their jobs done,” Jameson Taillon said. “Sometimes the starting staff is going to carry us, sometimes it’s gonna be the bullpen. It’s going to be defense sometimes.

The Yankees have now won seven straight and maintained the best record in baseball at 40-15. The Twins (32-25) lost for the second time in three games.

DJ LeMahieu’s single in the seventh inning was his 1,500th hit of his career. In his last start, Taillon flirted with perfection for seven-plus innings. Tuesday night, the righthander couldn’t get through the fifth inning. It was the first time in 11 games that a Yankees starter didn’t get through at least six innings. It was a season-high in errors for the Yankees Tuesday with three.

It was just the second time this season that Judge, Stanton and Rizzo each homered in the same game and the first time since April 29 in Kansas City. DJ LeMahieu reached base in each of his first five at-bats Tuesday with three singles and two walks. All nine of the Yankees starters in the lineup got a hit.

That helped the Yankees overcome the mistakes.

Rizzo had one error on a pickoff attempt, Josh Donaldson had a throwing error in the fourth and Lucas Luetge had one on a pickoff attempt in the fifth. The Yankees almost had another, but Isiah Kiner-Falefa’s bobble in the sixth was overturned and ruled a hit.

The Yankees have two errors in a game four times this season. This was the most errors the Yankees since last August when they had four errors.

“Just one of those nights where, you know, we weren’t really clean on that side of the ball, but fortunately, the bats picked us up big time and the bullpen did their thing,” Yankees manager Aaron Boone said. “Another way to win a game so that was nice.”

That wasn’t much of a help to Taillon, who finally had an off night. The righthander had been spectacular his last time out, taking a perfect game into the eighth inning before going on to win a 2-1 game.

Tuesday night, the Twins hit him for a season-high nine hits and scored a season-high four earned runs off him. Taillon walked one and struck out three.

Taillon got just seven swings-and-misses, two each on his curveball and cutter.

The Twins scored their first after Bryan Buxton doubled and then scored on Max Kepler’s sacrifice fly. Jorge Polanco singled, doubled in a run in the third and then homered off Taillon in the fifth, drawing the Twins within a run, 5-4.

That home run was the first a Yankees starter had allowed in six games, snapping a season-high five-game streak, the longest since 2012.

The four runs were the most Taillon has allowed since August 31, 2021 against the Angels.

Luckily for Taillon and the defense, the Yankees are built to bang their way out of these situations.

Judge and Stanton gave Taillon a lot of room to work with. Judge hit his major-league leading 22nd homer of the season, a 432-foot shot, with LeMahieu on base. Stanton followed with a 431-foot blast, his 12th of the season. Judge singled in another run in the fourth and LeMahieu drew a bases-loaded walk from Juan Minaya to give the Yankees’ their fifth run.

Rizzo added on in the seventh with a three-run shot after the Twins intentionally walked Judge with LeMahieu on. Joey Gallo and Jose Trevino singled in runs in the top of the eighth.

The Twins simply couldn’t keep up with that pace.

Donaldson was welcomed back to Target Field, where he played two seasons with the Twins, with boos. He made the throwing error that put former Yankee Gio Urshela, who he was traded for, in scoring position in the fourth. Urshela scored on Jermaine Palacios’ sacrifice fly.

Urshela went 1-for-3 facing the Yankees for the first time since being dealt to the Twins with Gary Sanchez for Kiner-Falefa, Donaldson and catcher Ben Rortvedt. Sanchez, who admitted to some extra adrenaline facing the Yankees, went 0-for-4.

Both said they had turned the page on their Yankees careers, but were grateful for the opportunities they had there. Even though he was a controversial player in New York at the end of his time in pinstripes, Sanchez was nothing but grateful.

“The opportunity to become a professional baseball player and the chance to be in the big leagues and opportunity even after being traded,” Sanchez said is his feelings toward the Yankees.

“We’ve got a great starting rotation and their past couple starts have been impressive. Taillon went out there and battled against a tough lineup. Up and down their whole lineup they got guys that can scrap out good at-bats, you know, get on base different ways,” Judge said. “So we’re just happy to pick him up.”