AAA: Concern over ‘100 Deadliest Days’ not limited to teen drivers 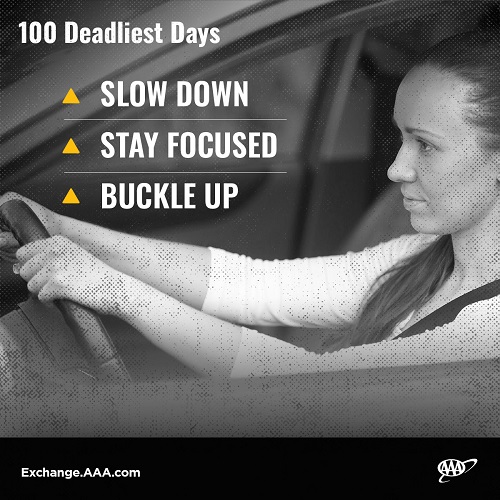 AAA is sounding the alarm as we head into the ‘100 Deadliest Days,’ concerned that what is typically the deadliest time of year for crashes involving teen drivers may, in fact, be deadlier this year for everyone, including pedestrians and cyclists.

Recently released federal statistics reveal that traffic fatalities involving drivers of all ages reached a 16-year high last year, increasing more than 10% over 2020, and early crash data suggests this year may be significantly worse. So, as we head into the summer months, safety messaging must be broad.

“Speeding is up, seat belt use is down, and driver impairment and multiple other factors contributed to more than 42,000 traffic fatalities last year – an increase of more than 10% over 2020,” said Shawn Steward, AAA South Dakota spokesman. “We know that fatal crashes involving teen drivers nearly double in summer months as compared to the rest of the year, but this summer, AAA is concerned that the ‘deadliest days’ may refer to increased risk for everyone.”

With that in mind, AAA is encouraging everyone to think beyond the teen drivers who have traditionally increased risk on our roadways during the ‘100 deadliest days’ and consider what they themselves can do to reverse the disturbing upward trend in traffic fatalities.

“Teen drivers spend more time behind the wheel in summer months, and they certainly have less experience than those who have been driving for years,” AAA South Dakota’s Steward added, “but these troubling statistics indicate that whatever experience more seasoned drivers gained over time has been lost over the pandemic, with tragic outcomes.”

Summer Travels: Carefree but not Careless

A recent survey by AAA* found that most South Dakota residents are planning to travel this summer – with 57% planning multiple trips – and the great majority of them will be driving to their destinations. AAA is reminding everyone to do their part to ensure our roadways are as safe as possible.

We also remind motorists to observe the ‘Move Over’ law which requires that they slow down and move over for all first responders working at the roadside.