A series of models all make the same prediction: COVID-19 cases will take a sharp dip by July 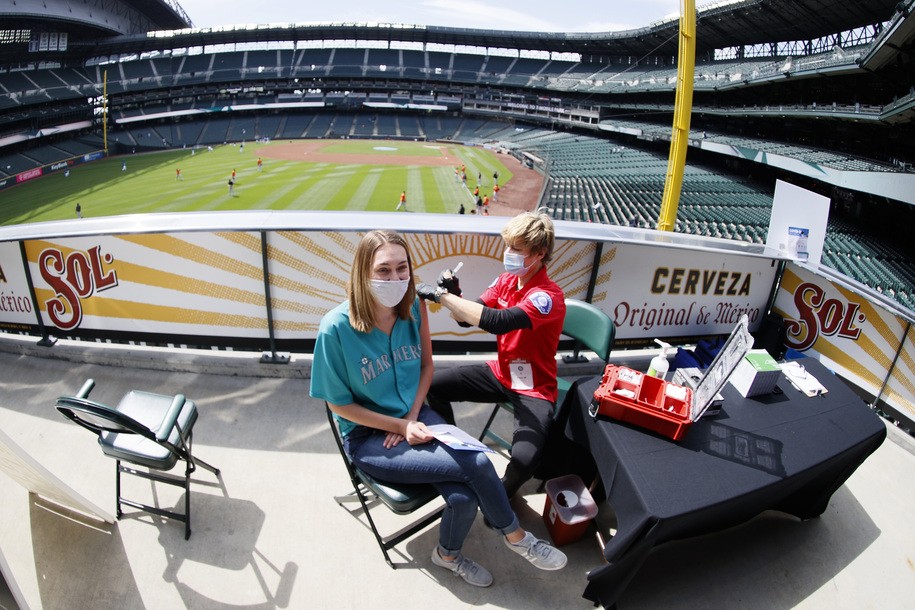 The CDC paper actually covers outcomes predicted by six different models that form the COVID-19 Scenario Modeling Hub. For this study, all the models included the assumption that the B.1.1.7 variant would be dominant, and that it is 50% more transmissible than the previously common variants.

They then looked at outcomes based on four possible scenarios:

For the purposes of this study, a high level of vaccination was considered to be 50 million doses a month (1.7 million doses a day) of the Moderna and Pfizer vaccines all the way until September, and about 20 million doses of Johnson & Johnson (0.7 million a day) over the same period. The United States easily exceeded that value during March and April, but as of May 1, the daily rate was down to about 2.1 million total doses (from a 3.2 million peak) and still declining. With the approval of giving vaccine to children as young as 12, it seems likely that the rate of vaccination may trend upward again, but achieving the “high” vaccination rates in the study will be difficult as long as nearly half of Republicans sit on the sidelines.

The low vaccination rates in the study aren’t actually all that much lower. They call for 45 million doses of Pfizer or Moderna each month, and 5 million doses of Johnson & Johnson—a daily rate of about 1.7 million from April to September.

The end result is that the high level of vaccination assumes that up to 90% of the population gets vaccinated by the end of the period, while the lower vaccination rate assumes 75%. Right now, the U.S. seems on track for something that much more closely matches the lower value. The current polling on Civiqs shows that 70% of adults have either been vaccinated or intend to, while 6% are “unsure.” Over time, that unsure group has consistently moved toward the vaccinated group (unsure started at 30% last November and has declined monthly) so an end number of around 75% by September seems entirely likely.

When it comes to what the study calls “nonpharmaceutical interventions” (mask wearing, restrictions on group sizes, reductions in restaurant dining, etc.) the high level of adherence is considered to be retaining 80% of the protections that were in place in March. The low level is when the use of these interventions is reduced to just 50% of where it was in March.

The outcome of all six models shows that, with high vaccine coverage and 80% retention of restrictions that were in place in March, “hospitalizations and deaths will likely remain low nationally, with a sharp decline in cases projected by July 2021.”

That’s terrific, and the headline on every news sites and broadcast Thursday morning seems to be “CDC predicts sharp decline in COVID-19 by July.”

But that’s also not where we are. The United States is extremely unlikely to reach the levels of vaccination set forth at the high end of the CDC study, and it’s difficult to find anywhere in the U.S. that currently maintains the level of restrictions that were in place in March, much less keeping those restrictions in place through September.

Still, while the worst scenarios in the CDC study are considerably worse—as in “Lower NPI adherence could lead to substantial increases in severe COVID-19 outcomes, even with improved vaccination coverage”—that doesn’t mean that any of the models predicts a new wave of cases. In fact, all the outcomes are very much on the “better than now” side.

One thing that helps build faith in these models is that the data, which actually dated to the end of March, predicted the rise of cases in April. After that, all of these models—even the low vaccination, low NPI model that, unfortunately, seems to match real-world conditions most closely—show a steep drop in cases, hospitalizations, and deaths beginning no later than June.

If these scenarios hold, expect some pretty decent fireworks this July.

There’s one other thing that could be done between now and July that would help to carry America across the finish line of the COVID-19 pandemic, and it’s the thing that should have been there on day one: a nationwide network of testing and case-tracking.

If the number of new cases each day is actually below 10,000 nationwide by late June, as these models indicate, that’s the kind of number that can be handled by case managers tracking individual cases, with individual quarantines and isolation taking much of the burden from societal measures.  That same process might have helped the U.S. avoid the world’s worst catastrophe under Trump. Now it could be the means by which President Joe Biden shows the disease to the door.

In The News: Survey of US Jews on Antisemitism & Israel

Conservatism is dead, fascism lives, and outlining the end of democracy is real resume builder