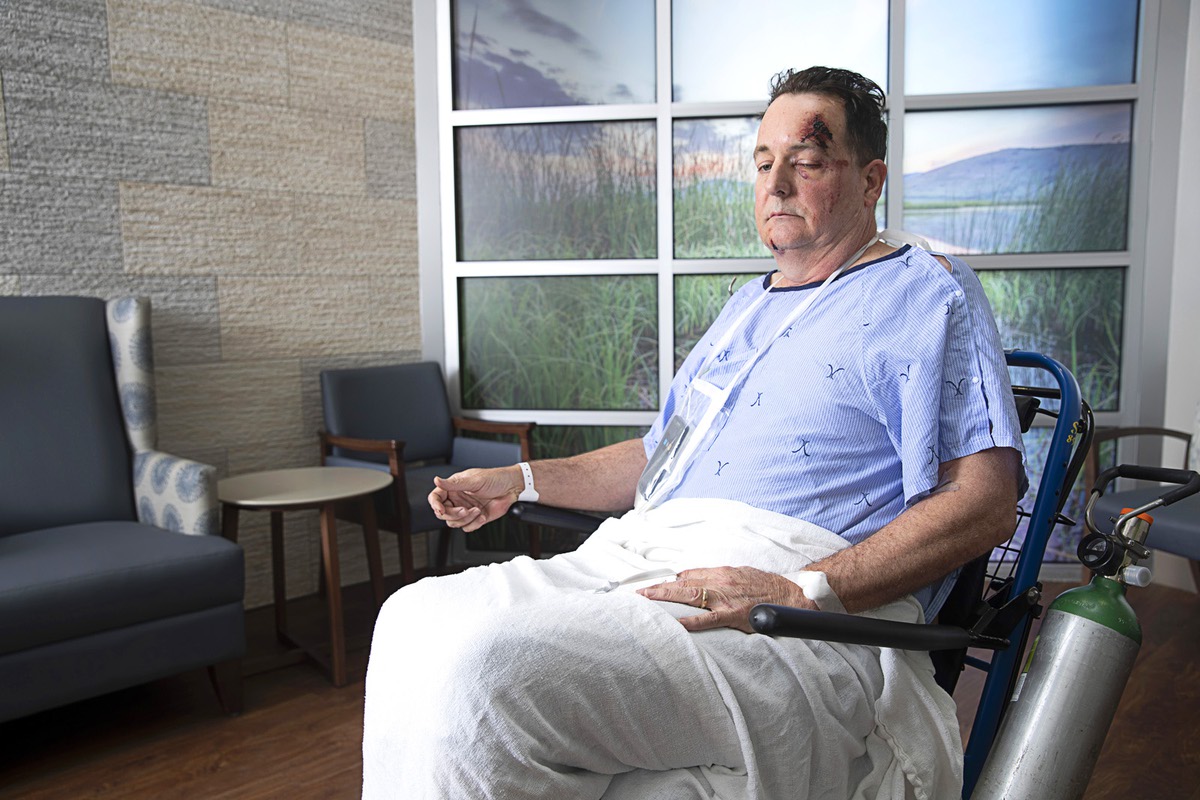 Basketball referee Perry Woodward is shown in the Reflection Room at University Medical Center Thursday, May 19, 2022. Woodward was attacked after a basketball game at Doolittle Community Center Tuesday night.

Perry Woodward was gathering his belongings after officiating a recreational basketball game between teenagers on Tuesday night when he peaked onto the adjacent court at Doolittle Community Center to see the status of another game.

Referees frequently wait for all games to end before heading home, as “there’s a certain brotherhood when we are in a gym,” Woodward said. “That is all we have is each other.”

The other game had ended, but referee Shawn Rowe’s night was far from over, Woodward said. One of the coaches, unhappy with the outcome of the game, was aggressive in questioning some of Rowe’s calls. He became animated and was downright intimidating, the officials said.

Gym workers asked the coach to leave, but instead the coach and his wife followed the officials to the door — almost daring them into a physical confrontation.

So, the officials decided to wait for a few minutes, assuming cooler heads would prevail.

The coach, his wife and teenage son got into Rowe’s face in the parking lot, the officials said. Woodward stepped in to defend Rowe, only to be suckered punched in the back of the head and then the face. He was knocked out cold, hitting the ground with a loud thump.

That’s all Woodward can remember, as he was out for eight hours, he said. He woke up at University Medical Center, where he’s still in poor shape with a major concussion, bleeding on the brain, sutures on his chin and forehead, five fractured teeth, neck bruising and a left ankle fracture.

Woodward says the coach’s wife was the initial aggressor and that the father and son each struck him.

The father was charged with battery on a protected person; two others were facing a misdemeanor battery charge, according to city of Las Vegas officials. Those two, according to Vince Kristosik, president of the Southern Nevada Officials Association, are the wife and the teenage player.

A police report will be available early this week, according to officials with the city, which operates the Doolittle Community Center.

Parents bellowing from the stands about a perceived poor call has always been a part of youth and high school sports, said Kristosik. But those complaints have become more threatening as leagues return to full-time slates after pandemic closures and are leading to physical harm of officials, who are quitting the industry at an alarming rate, Kristosik said.

The local association went from 300 basketball referees at the start of the high school season in November to 200 — well, make it 199. Woodward, 56, will be hanging up his whistle after a nearly 20-year career, where he’s risen to one of the top officials in the association who regularly is asked to work the most significant games.

“I just can’t believe what society is about these days and people taking a game to this level of craziness,” Woodward said. “I am going to be better. I am going to be all right. But why would anyone put themselves in harm’s way like that? It’s a sad, sad state of affairs.”

What happened in Las Vegas follows a trend of violence and threats to officials nationally, like a softball umpire in Mississippi who in April was hit in the face by a parent and suffered a black eye over a questionable call at second base. Also in April, a youth basketball league at a church turned violent with social media showing several people cornering and attacking a referee after the game.

In a 162-question survey last year by the National Association of Sports Officials, 47% of 17,487 respondents indicated that they had felt threatened by coaches and fans after a game.

“We are stretched thin. We don’t have enough (officials) to cover all the games,” said Kristosik, who has worked nearly 30 years in the Las Vegas area. “The community needs to realize how big of a deal this is. Are you kidding me? You are going to assault someone and put them in the hospital because of a rec game in May. The guy is making $28 to work the game ­— not enough for gas ­— and he gets suckered-punched on the way home to his wife and kids.”

Sports a microcosm of life

Athletes, after having games and seasons canceled because of the pandemic, have a renewed sense of urgency in the return to competition, said Brad Donohue, a professor of sport performance and mental health in UNLV’s department of psychology.

They are trying to make up for lost time, whether that’s competing to win a game or championship, or proving themselves for a roster spot or college scholarship, he said. Many could also have the feeling that lockdowns will again occur, which could also trigger the aggressive behavior after a negative result.

“Anything that affects the outcome, that will be a target,” Donohue said.

The spikes in aggressive, impulsive behavior over the past two years aren’t limited to youth and high school sports.

Everytown, a nonprofit organization that advocates for gun control, reports that 44 people monthly were wounded or killed in road rage shootings in 2021 — double the pre-pandemic average. Two males drivers on April 17 got into an argument at a red light on Flamingo and Jones boulevards, and one of the drivers pulled out a gun and shot the other. John Michael Owen, 42, was killed.

The violence has also been directed at public officials. The National League of Cities (NLC) in late 2021 conducted a survey in which 81% of officials surveyed experienced violence, threats and harassment.

U.S. Capitol Police recorded 4,135 threats against members of Congress in the initial months of 2021, the Los Angeles Times reported. That comes on the heels on the Jan. 6 attacks at the U.S. Capitol, when hundreds of loyalists to then President Donald Trump tried to disrupt the certification of President Joe Biden’s general election win. The insurrectionists pushed past the officers and made their way into the Capitol, parading and hollering through the halls, and entering the Senate chamber and lawmakers’ offices. Five people, including a Capitol Police officer, were killed in the violence unleashed after a rally by Trump, who was later impeached for inciting an insurrection.

“Personal attacks. Physical assaults. Cyberbullying directed at themselves their children and families — all while having to manage multiple crises in their communities — this is what it means to be a public servant in 2021,” Clarence E. Anthony, the NLC’s CEO and executive director, said in a statement. “It’s too easy to forget that our local leaders are also human. Along with their titles of ‘mayor,’ ‘councilmember,’ or ‘commissioner’ — they are also ‘parent,’ ‘friend,’ ‘neighbor,’ and so much more.”

Children see adults conducting themselves in aggressive manners — whether at a sporting event or confronting an elected official — and could be influenced that such behavior is acceptable, Kristosik said.

That’s where the local sports officials are terrified. Kristosik is begging coaches and league administrators to take time to speak with players and parents about their sportsmanship. He stresses that athletes will miss a shot or have a turnover, and officials will miss a call. More important: This is just a game.

Kristosik, just like those in other roles facing aggressive behavior, admits to restless nights after the attack on his officials. He keeps asking the same question: Why?

“(Officials) are seen as objects who output a bad call,” said Stephen Benning, a UNLV professor of psychology with a focus on emotion and personality. “Rather as being treated as a human being, they are being treated as an object where the violence is justified.” Basketball referee Perry Woodward is shown in the Reflection Room at University Medical Center Thursday, May 19, 2022. Woodward was attacked after a basketball game at Doolittle Community Center Tuesday night.

Is it worth the abuse?

Rowe walked into Woodward’s room at UMC on Wednesday and immediately became emotional. That could have very well have been him sitting there, Rowe reasoned, with his family distraught in the waiting room. And it was his young son Corey’s birthday.

“I could have left alone, but Perry stood by my side,” Rowe said. “It’s terrible what we are going through. I have such guilt that another person, my friend, is suffering in that hospital when it should have been me. I could have been in the hospital with my son visiting on his birthday.”

Rowe, a Rancho High School graduate, got into refereeing because he loves basketball and wanted to stay active in the sport when there was no longer a game in which he could play.

Unlike Woodward, who works in insurance, refereeing is Rowe’s full-time job. Between recreation games, summer leagues and tournaments, he averages working 20 games a week. One summer he worked 40 games in a week.

But when he got home Tuesday night, there was a tough conversation to have with his wife. There’s surely other jobs he could try, ones where his life wouldn’t be at risk for a questionable call

“I still love this. Why wouldn’t I want to do this anymore?,” said Rowe, pausing to contain his emotions. “This is a way to stay connected to the sport we used to play and still love. We are paying it forward. For the most part, there’s great relationships with the coaches and players. That why we keep coming back.”

Kristosik saw the association’s roster gutted in all sports during the pandemic. He says it is the product of multiple factors. Some officials found other work or hobbies during the closures, others still aren’t comfortable leaving the house because of the virus, and some have new full-time jobs that prevent them from making it across town for a prep game at 3:30 p.m. in the middle of the traditional work day.

Kristosik worked a baseball game earlier this month that was 40 miles from his house. With time on the road, gas money and the actually game it was a six-hour investment. After his expenses, he barely made $40.

“Our officials have come to the realization that taking this kind of abuse isn’t worth it,” Kristosik said. “I’m telling you, we are very close to telling the (Clark County School District) that we can’t cover all of their games. We were very close to that crisis this year.”

In baseball, the association started with 80 umpires at the beginning of the year. By the end of the year they had 40. Many games were staffed by only one umpire in what is traditionally a two-person job. And many times the umpire is a retiree out in the near triple-digit heat simply for the love of the game and community, Kristosik stresses.

“If things keep going like this, no sports will be played because nobody will be there to referee them,” Woodward said. “I love the game, and this is what I get for it — a parent, wife and son ganging up on me.”

But he would gladly do it again for his brother in officiating.

“I saw Shawn was in a mess, and we don’t have anyone else in these gyms,” Woodward said. “It was my duty to get him out of the gym safely.”

Appeals arguments set on immigrants brought to US as kids