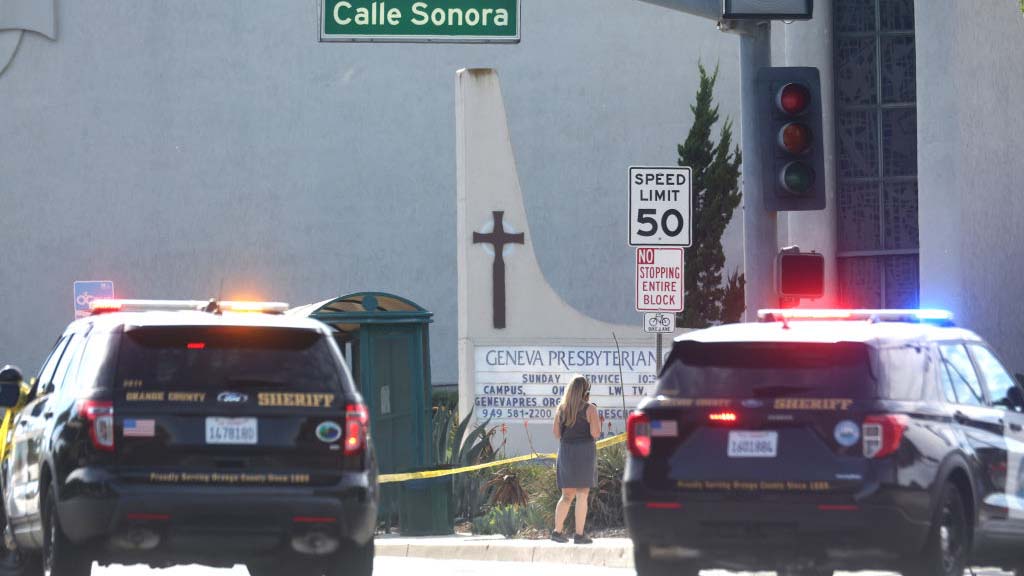 A man who Orange County Sheriff’s deputies say was motivated by hate due to political tensions between China and Taiwan opened fire Sunday inside a Taiwanese congregation in Laguna Woods, killing one person and injuring five others.

David Wenwei Chou, 68, of Las Vegas, Nevada, allegedly locked doors at the church and fired rounds before his gun jammed and he was subdued by churchgoers until deputies arrived. He is in custody on suspicion of one count of murder and five counts of attempted murder stemming from the 1:26 p.m. Sunday shooting at the Geneva Presbyterian Church at 24301 El Toro Road.

Based on statements from the Orange County Sheriff and the church and interviews with witnesses, here are the series of events from that day.

He allegedly enters the sanctuary and identifies himself to the receptionist as “Da-Wei Chou.”

Chou allegedly closed doors with chains and puts Super Glue into the locks.

The church receptionist doesn’t recognize the man in a black shirt with a word written on it in white enter the sanctuary.

The receptionist welcomes him anyway and asks the man in Taiwanese to fill out a form with his personal information.

He refuses, says he had filled out the form before, claiming he had attended services there before.

Chou allegedly sits in the back of the sanctuary reading a Chinese-language newspaper focusing on Taiwan news, during the church service.

A lunch banquet takes place with around 140 people.

Near the end of lunch congregants begin leaving. As they walk through the doors, they see the suspect wrapping iron chains to lock the doors.

Chou allows some church goers to leave. Some ask him about his actions, but he refuses to answer. Some assume he’s a church security guard.

Chou uses a hammer and nails to secure two exits.

He allegedly fires a bullet into the ceiling.

Dr. John Cheng tries to intervene, but is shot and killed.

Pastor Chang hits Chou with a chair as the suspect tries to reload his gun.

Other congregants confiscate Chou’s weapons and hogtie his arms and legs with an extension cord.

Deputies arrive minutes later with weapons drawn and take the suspect into custody.