A Merger of Two Fort Worth Barbecue Joints Preserves Both Legacies 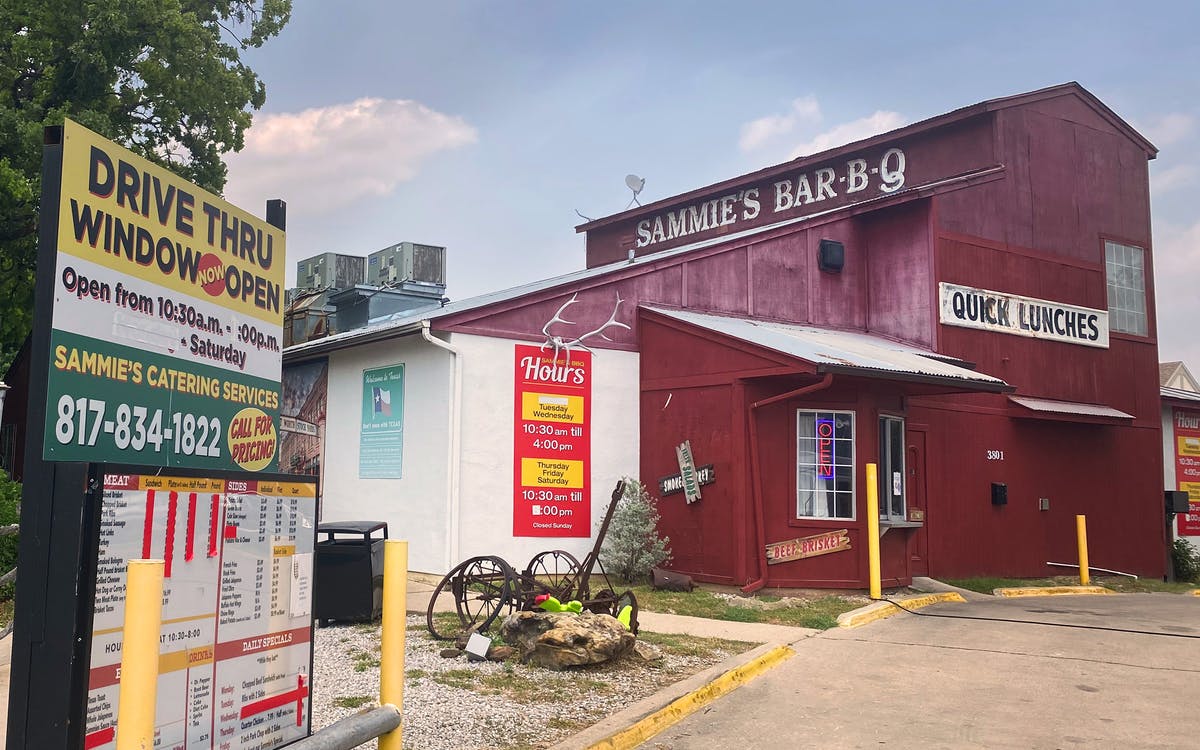 As long at Sam Gibbins Jr. can remember, he’s told people his dad owned a barbecue joint on Belknap in Fort Worth. Given the name, they all thought he meant Sammie’s Bar-B-Q, the legendary joint that’s been serving barbecue and beer since 1946. But Sam Gibbins Sr. was actually the proud owner of the Smoke Pit, which opened in 1961 a mile and half down the road. That is, until a few years back, when Sammie’s went up for sale. Sam Sr. knew the Smoke Pit would be demolished to make way for an apartment building, so he bought Sammie’s, remodeled the place, and reopened it in 2018.

Sam Sr. retired two years ago, leaving his son, a recent graduate of Texas A&M’s business school, as the caretaker of Sammie’s—and of the Smoke Pit’s legacy. “It’s a blessing and an honor to keep it going,” Sam Jr. told me over a double-cut smoked pork chop that had been marinated overnight. They didn’t serve a smoked pork chop at the old Sammie’s, but this homage to the Smoke Pit is the special on Fridays. For $16.99, it comes with two sides, and I chose the rough-chopped slaw with a sharp vinegar dressing and the pillowy onion rings, both made just the way an old Sammie’s regular would remember them. It was a plate that represented the marriage of two Fort Worth barbecue institutions.

When Sammie’s was first opened by Sammie Norwood and Charles “Pop” Ross in 1946, it was a drive-in with carhops. “Specializing in BAR-B-Q Ribs and Beef Sandwiches” read a 1948 advertisement in the Fort Worth Star-Telegram. The tender ribs are still a specialty, as is the signature sauce served on the side, but you’ll have to ask for it. Squeeze bottles on the table hold a sweet, tomato-based barbecue sauce brought over from the Smoke Pit. The thinner, old-style sauce, best for dipping, is kept warm in the back. It’s made from Norwood’s original recipe, which has its own legend behind it.

According to lore passed down to Sam Jr., Norwood was stationed in Germany during World War II. While there, he tried a sauce that was like nothing he’d ever tasted, the kind worth writing home about—literally. He described the sauce in a letter to his girlfriend and said he’d bring the recipe home, promising, “This is going to make us millions.” Norwood opened Sammie’s Bar-B-Q after he returned from the war and served that same sauce. It made him a good living, if not the promised millions.

Norwood had a falling-out with his business partner, Ross, and left in 1967. According to his 1992 obituary, he went on to own S&H Bar-B-Que on Camp Bowie Boulevard and helped his wife operate both Sam’s Beefeater Bar-B-Que in Arlington and Sam’s Bar-B-Que on Sylvania Avenue in Fort Worth until 1986.

Ross sold Sammie’s to Sam Allen and Bobby Platt in 1970, but he remained on as manager until 1977. Allen and Platt maintained the menu they inherited, but the city said the original structure would no longer meet building codes. They decided to build a new restaurant next to it, which is where Sammie’s is housed today. For the last day in the old building, Allen and Platt advertised a “grand closing” party. On a late-November afternoon in 1987, they offered beer for a nickel and barbecue sandwiches for a quarter, which resulted in a line of customers a block long. Columnist Bud Kennedy described the scene as “a crazy, drunken rib riot” in a Fort Worth Star-Telegram article.

When Platt sold the restaurant to Sam Sr. four years ago, the drive-through hadn’t operated in a long while. COVID-19 hit just as Sam Jr. was taking the reins, and they decided it was best to get the window open and the speakers working again. “It was me, another cook, and a girl working the window,” Sam Jr. said of the skeleton crew that operated the joint for months in 2020. Even today, a third of the business comes through the drive-through lane.

Sam Jr. is the joint’s pitmaster, and he cranks out classic dishes like smoked bologna and bright red hot links, as well new ones like a brisket grilled cheese and poblano mac and cheese. The potato salad is borrowed from the Smoke Pit’s menu, just like the smoked pork chop and the table sauce. Sam Jr. and his dad took the old brick smokers out of commission and installed two Southern Pride rotisseries in the kitchen, but they still run on hickory wood, just like Norwood used.

Back in the day, Sammie’s was at the top of the barbecue heap in Fort Worth. The real competition began after Angelo’s opened in 1958, and it heated up after Railhead joined the fray in 1986. Nowadays, the competition between the three is as much about the schooners of ice-cold beer as the barbecue. “We’ve got the cheapest, coldest beer in Fort Worth,” Sam Jr. boasted of his $3.25 domestic beers, noting that Angelo’s beers are $4 and Railhead’s are $3.75 ($3 during happy hour). It’s just one of the ways he’s trying to make it feel like the good old days.