A Guide to Texas Weather Words 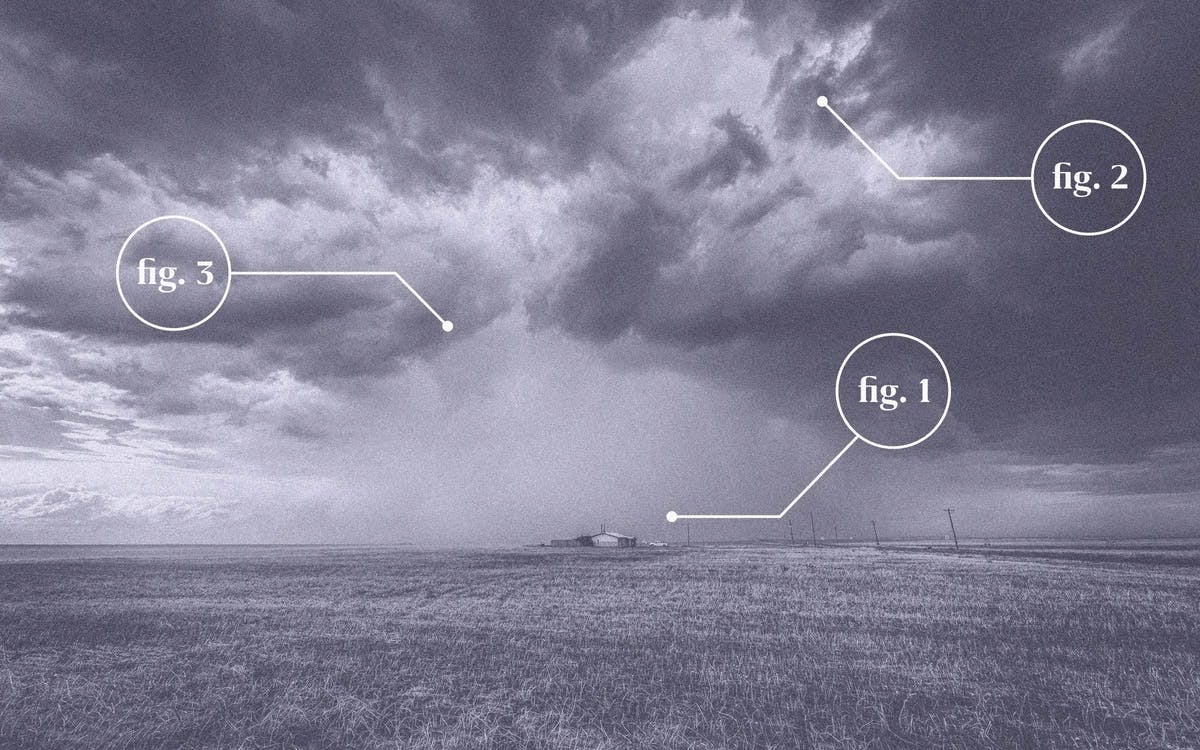 Texas is known for its extreme weather. Take, for example, March 21, 2022. On that Monday, the Panhandle froze in a record-setting blizzard. The Dallas–Fort Worth area and East Texas grappled with severe thunderstorms that brought flooding and hail. Central Texas was rocked by tornadoes, including a twister that passed over Interstate 35. Drought-stricken Abilene saw several separate wildfires merge into one massive fire complex. Canyon shivered with a low of 28 degrees, while Laredo sweltered with a high of 98. In other words, Texas was Texas-ing.

Now, two and a half months later, almost 80 percent of the state is in a drought, while Texans along the Gulf Coast nervously await an already active hurricane season. Floods. Drought. Extreme heat. Hurricanes. Tornadoes. Dust storms. Hail. Floating fire ants. We have it all—and sometimes all at once. At the same time, thanks to abundant air-conditioning, hot-hot Texas is also an attractive climate for many fleeing colder climes.

As befits a state with so much weather, we love to talk about it. Indeed, in these times of political everything, the subject may be one of the last safe spaces for idle chatter. (That is, if one avoids the whole issue of climate change!) And if you’re a farmer or rancher or someone who works outside, the weather is more than just a point of conversation—it can make you or break you.

If you want to be a true Texas weather sophisticate, whether you were born here or got here as quick as you could, then you need to be fluent in the rich language that describes our capricious climate and its endless variations. This wildly incomplete list favors entries in the lexicon that are largely nontechnical and reflect the geographic and climatic diversity of the state. Some are folk terms with roots in Texas’s agricultural past. Others are relatively recent concoctions, neologisms necessary to describe our rapidly changing climate. Enjoy.

When summer becomes unbearable and the calendar rolls around to September, many Texans begin pining for a norther—a blast of cold air from up north, often the Arctic. The term is used elsewhere in North America, but according to the American Meteorological Society, a Texas norther in particular “comes as a rushing blast and brings a sudden drop of temperature of as much as 25°F in one hour or 50°F in three hours in winter.” Northers frequently fulfill the Texas cliché that if you don’t like the weather, just wait fifteen minutes. And they also can have a regional flavor, as someone pointed out on Twitter about famously stinky Luling:

The blue norther is a type of norther most spectacularly witnessed in the flatlands of North Texas and the Panhandle. Here’s how Texas Monthly writer Jan Reid once described the way a blue norther unfolds in the Panhandle: “On clear fall days a white cloud rises from the prairie and quickly envelops the horizon, the upper part of it assuming the shape of an anvil. Because the low clouds are wet and stormy, the horizon often turns bluer than the sky above the cloud mass—hence the term ‘blue norther.’ ” The flat, almost featureless expanse of the Great Plains makes Texas vulnerable to the vicissitudes of polar weather, a phenomenon aptly captured in this hoary Panhandle saying: “There’s nothing between Amarillo and the North Pole but a barbed-wire fence.”

Sometimes, Texas decides to skip spring and go straight from winter to summer. That early onset of hot weather during the “shoulder months” of April and May is a sudden summer. “I would most certainly describe the first three weeks of May 2022 in Texas as being a sudden summer,” says Victor Murphy, the climate services program manager with the National Weather Service in Fort Worth.

Eric Berger, founder of the Houston-centric Space City Weather, has proposed dividing Houston summers into four phases, the first of which he calls early summer. That’s when Houston “first starts to see ninety-degree temperatures with regularity, but some nights in the sixties are still possible, and there’s still the thinnest hope of a weak front.” Alas, early summer started about two weeks early this year.

And sometimes summer rudely makes a return after fall has briefly appeared. When the chilling north winds of a cold front give way to the hot breath of a southerly breeze, we have a “false fall” on our hands—and unfortunately, thanks to climate change, false falls are becoming more common.

Similar to a flash flood, a flash drought happens quickly. In a matter of weeks—perhaps due to a sudden summer—soils dry up, plunging an area into drought conditions that could otherwise take months to develop. Murphy offers a more scientific definition: “A flash drought event is defined as a drought event with greater than or equal to two categories degradation in a four-week period based on the U.S. Drought Monitor.” For example, in November 2020, much of Central Texas found itself in a flash drought after a rainy September turned into an extremely dry October and November. Parts of the Hill Country went from no drought to “extreme” drought—the second-worst category on the drought monitor. According to researchers at the University of Texas, rapid-onset droughts are coming on faster and faster thanks to climate change. This being Texas, one surefire way out of a flash drought is a flash flood. Pray for rain, but not too hard.

Storm chasers have a vernacular all their own, borne of the adrenaline-fueled chase of extreme weather. The Texas Panhandle is one of the sacred grounds for tornado-seeking storm chasers, and when the conditions are just right, awe-inspiring and very scary things can happen. Panhandle magic occurs “when the dry line [dry-moist boundary] sets up over the Texas High Plains in May and starts churning out tornadoes,” says Brantley Hargrove, the author of The Man Who Caught the Storm: The Life of Legendary Tornado Chaser Tim Samaras. When Panhandle magic happens, storm chasers are apt to say things like, “Oh man, that thing’s big-time meso!” (We will not be covering “meso” in this guide; too technical!)

Ah, yes, the dry line. Rarely talked about in the eastern half of the state, the dry line is as closely watched by West Texans as the Texas Tech transfer portal. In essence, the dry line is the boundary between the moist, subtropical air mass to the east and the dry, hot air mass to the west. In the spring, the dry line is an important rainmaker. Given the right conditions, it can conjure powerful, drought-busting thunderstorms out of bluebird skies. But it’s an ambulatory beast, moving as much as two hundred miles in a single day. “Typically in our area, it may start out in the morning along the New Mexico border, and then it can mix as far east as, say, around Childress during the afternoon,” says Ron McQueen, a recently retired lead forecaster with the National Weather Service office in Lubbock. The dry line is also known as a Marfa front, because it typically sets up over the Marfa area in the spring. Marfa Front is also a great band name.

Most of the terms up to this point aren’t folk sayings, exactly, but Texas, with its deep roots in farming and ranching, is fertile ground for colloquialisms for all manner of weather. Floods in particular seem to have inspired a lot of colorful shorthand in Gulf Coast states and the South. Why say “flood” when you can describe a biblical deluge as a “toad strangler”? Why call it “heavy rainfall” when you can reach for the slightly offensive “turd floater”? Let’s all do our part to keep these phrases alive; teach a child or a Californian how to properly describe a flood today.

For inspiration, here’s how John Graves, that masterful chronicler of rural Texas, put the phrases to work in his 1980 book, From a Limestone Ledge:

“I used to have a country neighbor who during drouths would inevitably, when he saw a white rim of cloudiness on the eastern horizon, prognosticate a gully-washer, a clod-melter, a frog-strangler within the week.”

Comin’ Up a Cloud

Another Texas colloquialism. This one means, essentially, it’s going to rain. But it can also be used in a past-tense form. “Out in West Texas, when a farmer or somebody in a rural area says, ‘Hey, it came up a cloud last night,’ that probably meant it was a hell of a storm,” says Ron McQueen.

This strange-sounding word has its origins in Arabic, but has increasingly found favor in the desert Southwest and West Texas to describe a certain kind of dramatic dust storm. A haboob is a “sudden, very intense dust storm caused by a thunderstorm outflow wind,” says McQueen. Most common in the spring, haboobs can tower 10,000 feet high and span one hundred miles while reducing visibility to as little as a few feet as they race up to 60 miles per hour. A massive haboob, with its forerunning wall of wind and dust, is an awesome, almost apocalyptic sight—often spawning gape-mouthed appreciation from storm chasers and other eyewitnesses.

The haboob is a relatively recent entrant to the American weather lexicon, and it’s not without controversy. McQueen said his National Weather Service office occasionally receives complaints about its usage. “That’s not a word we use here,” McQueen said, describing the typical message. “We don’t need an Arabic word to describe what we already call a dust storm.” But McQueen said that a haboob is a distinct type of dust storm—one with a specific word already in use in Arabic-speaking parts of the world, such as the Arabian Peninsula. Plus, let’s be honest, it’s fun to say: “huh-boob.”

Widely used in northern Mexico and among Spanish-speaking Texans, “La Canícula” refers to the dog days of summer, a forty-day period in July and August characterized by rainless, hot, and stagnant days. Like its English counterpart, the term has astronomical origins. For much of July and August, the constellation Sirius (“Dog Star” in English; “Can Mayor” in Spanish”) rises in conjunction with the sun. This period, from July 3 to August 11, is known as the Canicular Days and happens to mostly correspond with the hottest, driest stretch of summer in parts of Mexico and Texas. In the Rio Grande Valley, for example, the period from mid-July through mid-August is one of the driest times of the year, and the tail end of La Canícula is the hottest. But La Canícula is more than just a meteorological phenomenon; it’s also a cultural one. As Molly Hennessy-Fiske wrote in the Los Angeles Times in August 2018, during a string of brutal triple-digit temperatures in South Texas: “Even before it started, the term was on residents’ minds, in part because of the host of superstitions that surround it: Children should be kept inside during canicula season. It’s not good to make big decisions, like getting an operation, during the canicula. If the canicula starts with rain, the summer will be mild. If it starts out hot and dry, as it did this year, beware.”

This year, La Canícula seems to have come early, notes Nathan Richardson, a professor of Spanish at the University of Texas at San Antonio. “So what can we say about the summer of 2022? This year´s dog looks bigger and scarier than normal,” Richardson says. “It´s out for blood. Or at least a lot of sweat. And maybe, if your AC breaks, a few tears. The summer of 2022 could be the Cujo of Canículas.”