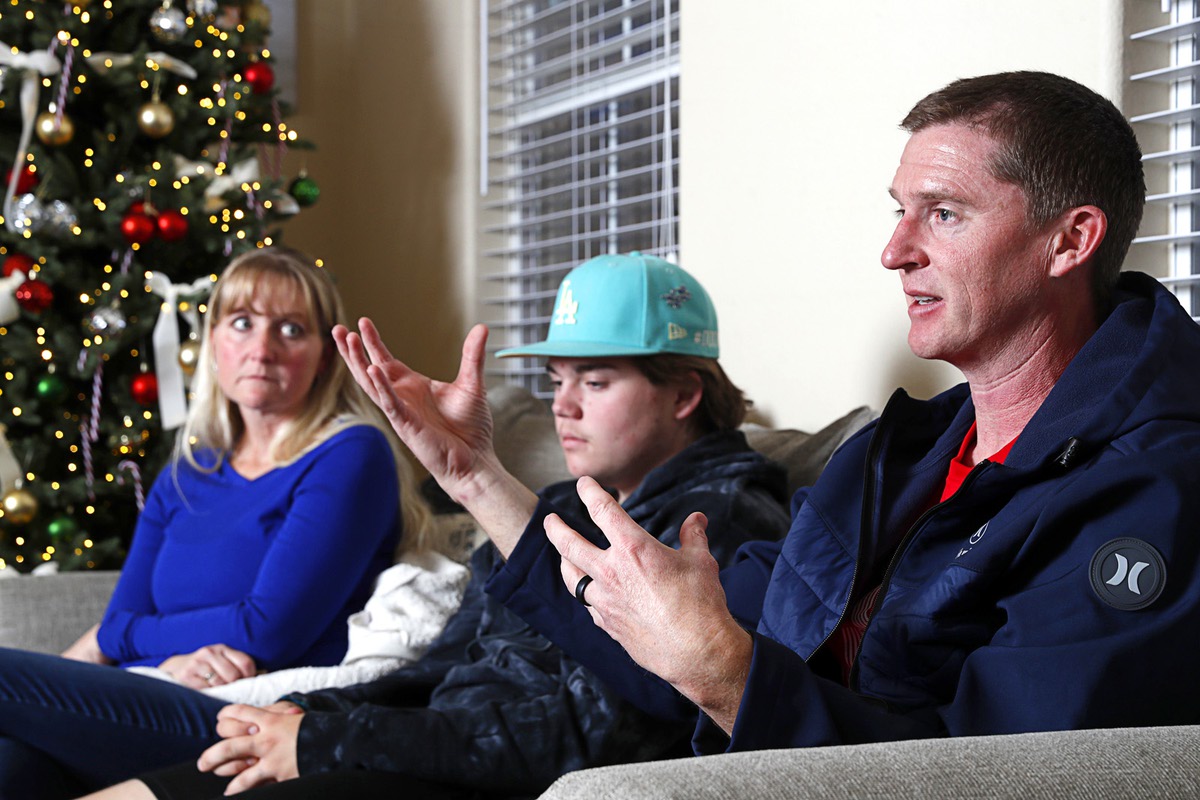 Jason Patchett, right, talks about his son Rex during an interview at the Patchett home in Henderson Thursday, Dec. 1, 2022. Rex’s friend Brayden Radomski and his mother Christy listen at left. Rex Patchett, 13, was killed by a motorist who lost control of his car on March 7, 2022. Jose Marmolejo, 21, pled guilty to a reckless driving charge and is expected to be sentenced on Jan. 25, 2023.

The eighth-grader, described by his loved ones as a bit of a klutz and a lover of the holidays, had big plans for when school let out — including hopes of riding dirt bikes with his buddies. That’s what he told one of his best friends, Brayden Radomski, before he left Brayden’s house to walk home and was struck by a speeding car the evening of March 7.

Henderson police and fire units responded about 5:15 p.m. to the collision on Paradise Hills Drive, where a sports car traveling at a high rate of speed had lost control, hit a curb and continued onto the sidewalk, striking Patchett. The 13-year-old was pronounced dead at the scene.

His father, Jason Patchett, had been having what he described as a normal Monday afternoon at home when he found out about the collision near Mannion Middle School.

With his son unaccounted for and not responding to his family’s calls or texts, Jason Patchett said he just knew that one of his biggest fears had been realized.

“(It’s) definitely one of those worst-case scenarios you go through, of just not knowing — but knowing at the same time,” he said. “And the worst thing that could possibly happen has just happened.”

Now, nearly nine months after Rex Patchett’s death, the Henderson community is coming together to write letters to the judge who will oversee the Jan. 23 sentencing of Jose Marmolejo, the driver found to be responsible for the collision.

Marmolejo was driving about 90 mph, 55 mph over the posted speed limit, when he lost control of his vehicle on a bump in the road, known in the community as “Mannion’s hump,” Jason Patchett said. The bump has since been repaired.

Marmolejo was charged with reckless driving resulting in death and child abuse, neglect or endangerment resulting in substantial bodily harm, according to county court records. Impairment was not a factor.

He pleaded guilty in October, which Jason Patchett said allows the judge to make the minimum prison sentence of one to six years probationary — a penalty which his family and friends do not consider proportionate to the crime. He is out on bond awaiting sentencing.

“This is Rex’s life,” Jason Patchett said. “He suffered the ultimate price for someone’s three minutes of fun.”

The Patchett family is soliciting the help of the community to not only write letters regarding the death of their son and brother, but also the “bigger issue” of street safety in the community, Jason Patchett said.

Over the years, multiple cars have sped down the Henderson road and struck the sidewalk in the same area that Rex Patchett was killed, his father said. Most recently, a memorial which had been erected in his son’s memory near Mannion Middle School appeared to have been run over by a car that hopped the curb, Jason Patchett said.

“The fact is, it’s happening, and it continues to happen,” Jason Patchett said. “And not even the death of an individual — a child — is going to stop what’s going on. And so my plea, and I think the community’s plea, is that the city — someone — needs to do something.”

More than 170 letters have been submitted ahead of Marmolejo’s sentencing,by Judge Carli Kierney he said.

Though many of those writing the letters are friends or relatives, others are concerned members of the community and beyond. Sam Gilek, Rex Patchett’s uncle and a Henderson firefighter, said first responders in the area have participated in the effort as well.

The letters have also been a reminder to the Patchett family of the positive impact Rex Patchett had on others, his father said. He and his wife, Samantha Patchett, described their son as having a joy for both life and his loved ones — not least of which included his two older brothers and little sister.

His son made the most of his 13 years, Jason Patchett said, as a good person and a goofy kid.

The letter-writing campaign is primarily motivated by Rex Patchett’s selflessness, his father said. He never put himself first, and Jason Patchett said he wants to reflect that by prioritizing the community and its safety as a whole.

His family’s not focusing its energy on Marmolejo, but on something much bigger than him, Jason Patchett said.

“It’s not about him. It’s about my son’s life and his legacy, and how we can help … other people in this community and protect the next kid,” he said. “So they don’t get run over by some reckless driver, or some family’s getting a phone call saying, ‘Hey, are all your kids accounted for?’ ”