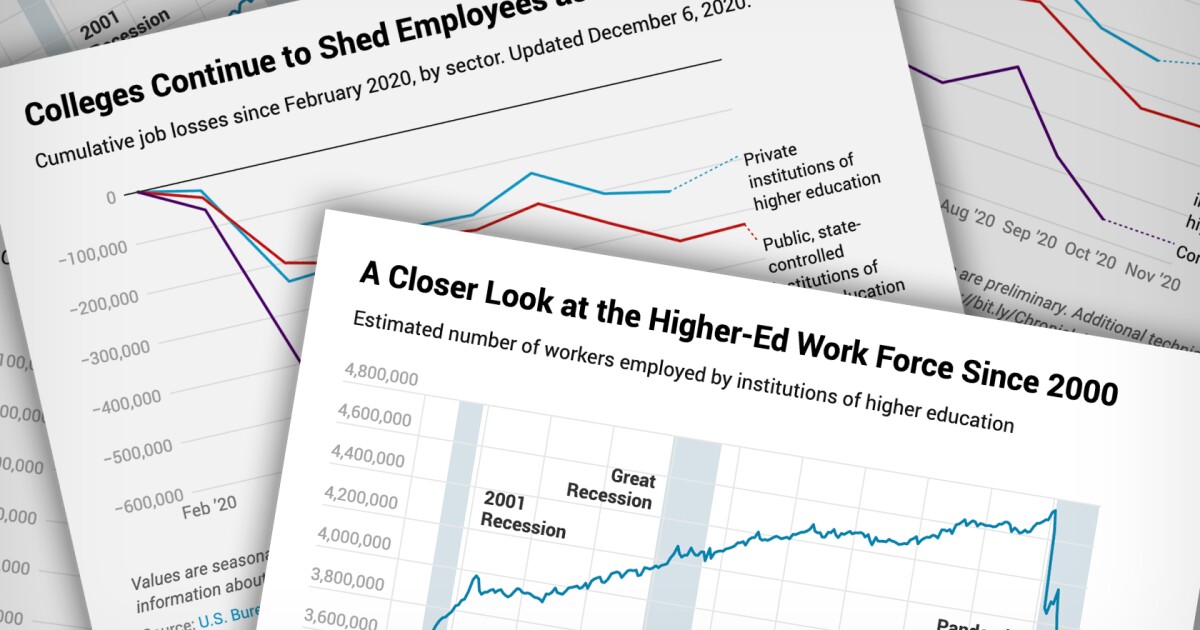 Colleges and universities closed out 2020 with continued job losses, resulting in a 13-percent drop since last February. It was a dispiriting coda to a truly brutal year for higher ed’s labor force.

Since the World Health Organization declared a pandemic, the U.S. Labor Department estimates that American academic institutions have shed a net total of at least 650,000 workers, according to preliminary, seasonally adjusted figures released on Friday. Put another way, for every eight workers employed in academe in February 2020, at least one had lost or left that job 10 months later.

Across the broader economy, 9.9 million fewer people held jobs in January 2021 than in February 2020. The national unemployment rate fell to 6.3 percent on Friday.

At no point since the Labor Department began keeping industry tallies, in the late 1950s, have colleges and universities ever shed so many employees at such an incredible rate.

All of the job losses between the department’s November and December reports occurred in academe’s private nonprofit and for-profit sectors. Estimates from last summer had suggested that the public and private sectors might see diverging recoveries, with private colleges seemingly faring better than public ones at that point. But since then, neither has been able to produce consistently positive job numbers.

Though estimates of the number of workers employed by colleges and universities are available from the Labor Department, information on other classes of workers remain unavailable, such as how many employees lost their jobs because of scaled-back business at companies that contract with academic institutions to prepare food and clean facilities.

A Washington Post report and analysis last fall found that “the lowest-paid workers in higher education are bearing the brunt of the layoffs, mirroring broader trends of the most unequal recession in modern U.S. history.”