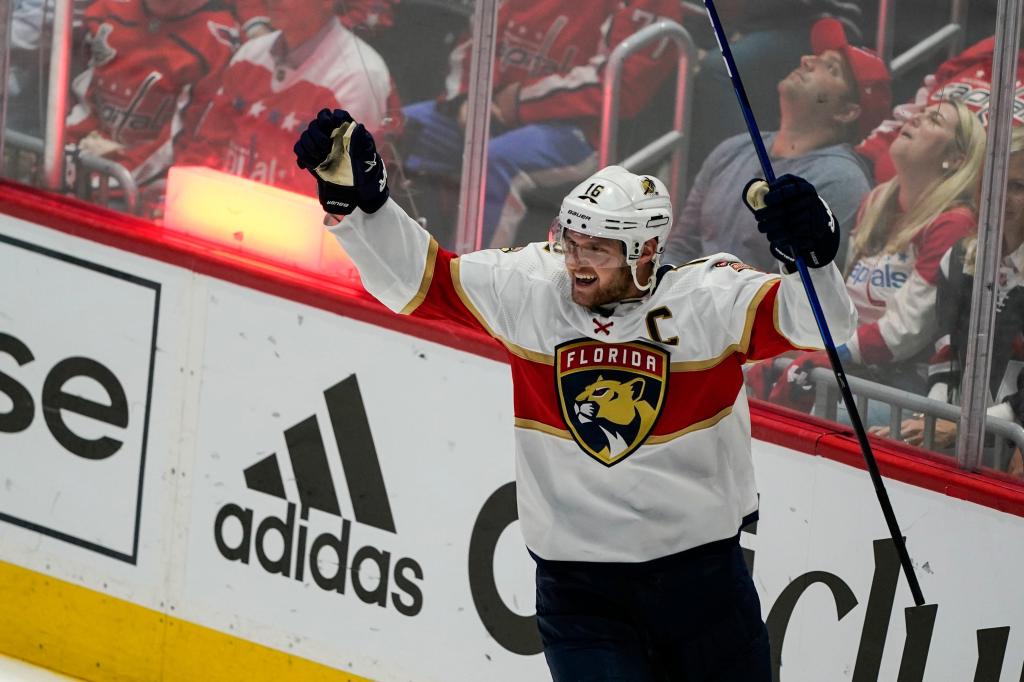 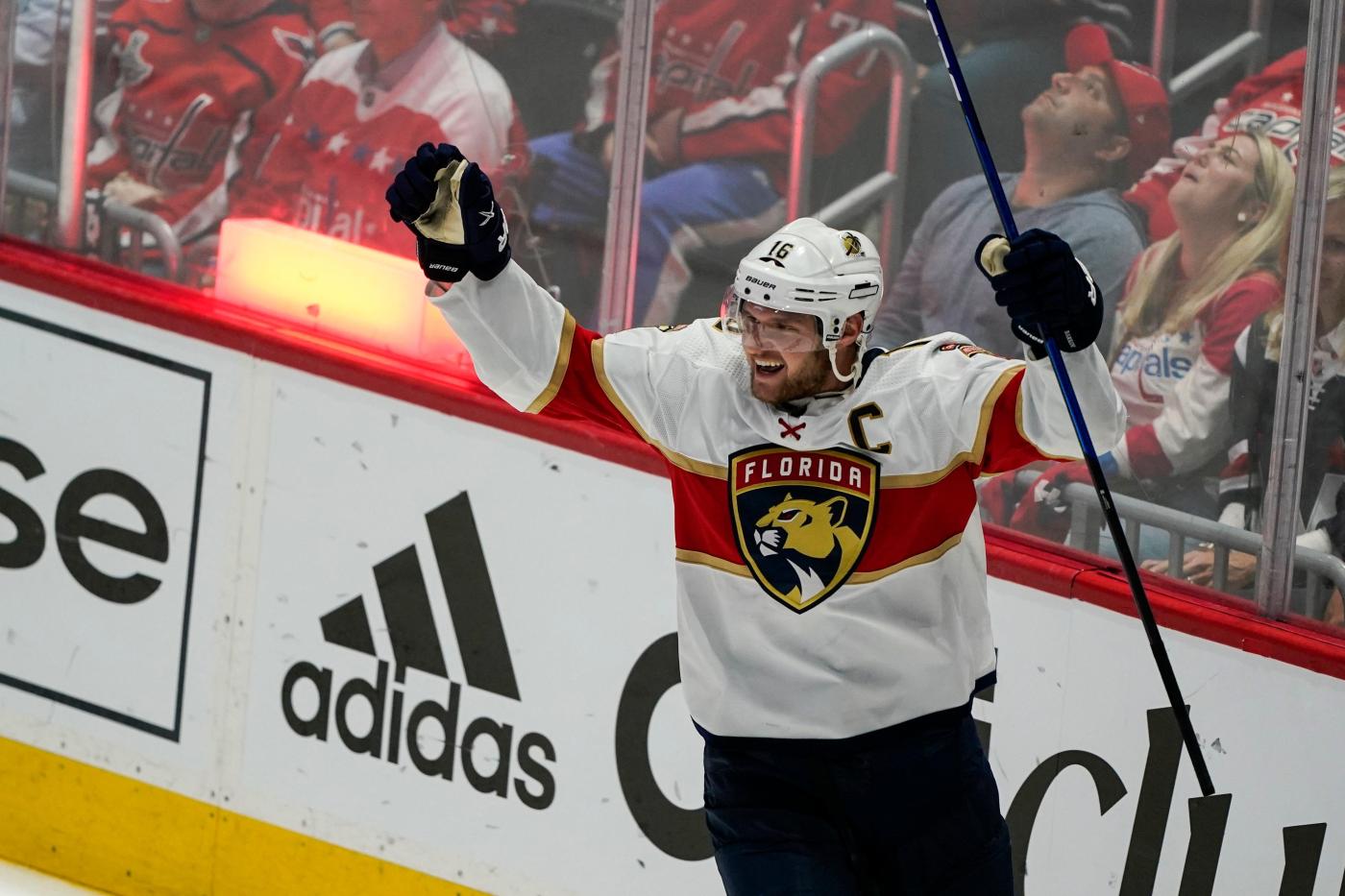 There were five owners, not counting the group of eight investors briefly fronted by beloved Miami quarterback Bernie Kosar, who said hockey was his, “first and special love” before fading away to the bigger wallet of Alan Cohen.

Cohen faded away after four indifferent seasons, telling people he liked investing in horses more than hockey players because, “They don’t talk back.”

Cliff Viner bought the team. His tenure’s memory is of attempting a quiet divorce in Key West where his ex-wife’s relinquishing of any right to the Panthers became such a talk-story the team released a statement on it all.

Does this help any? Does it begin to explain why Friday mattered? Does it tell of the long and tortured treadmill the Panthers had been skating on for more than a quarter-century?

At 10:43 p.m. on Friday night, Carter Verhaeghe was again the cavalry, scoring in overtime as the Panthers beat Washington in a 4-3 thriller. That meant the Panthers won a playoff series. That’s no typo. They actually won a series. A ghost went poof.

“I’m not going to lie, it feels amazing,’ said Aleksander Barkov, who is in his ninth Panthers season.

Dolphins fans bemoan not winning a playoff game since 2000. The Marlins haven’t won since 2003. That’s kids’ stuff compared to the Panthers and their 26 years between advancements in the playoffs.

Here’s one story: Pavel Bure led the league with 58 goals in 1999-2000, and was benched in a playoff series where the Panthers were swept by New Jersey. Benched.

Here’s another story: Jaromir Jagr, who was ushered out of the Eastern Conference finals in 1996 by pesky Panthers like Tom Fitzgerald and Bill Lindsay, joined the Panthers two decades later. I once asked him about that series. He asked me something back.

“Is it true they haven’t won anything since then?” he said

We could go on with these stories. And on. Mike Keenan, as general manager, fired his coach, Duane Sutter, just 26 games into the 2001 season, put himself behind the bench and, later, agreed to terms on a new contract with the one player this franchise needed: Roberto Luongo. Keenan then traded Luongo before the contract was signed.

Luongo was traded back to the Panthers seven years later, part of a building roster that made the playoffs in 2016. All the inner wiring was then dismantled in a manner that only the Panthers could do.

The veteran coach, Gerard Gallant, was fired after a road game in Carolina and left on his own so he had to wait for a taxi to leave the arena. A coach who had no NHL experience, Tom Rowe, was put in charge of running the front office and coaching the team.

Confession: Just writing this boils my blood a little, remembering stories I filed away long ago. The Panthers had great hockey men like Bill Torrey providing guidance and sustenance — if they wanted that — until he died in 2018.

“I’m not sure anyone’s listening to what I say,” he said to me once, after one of those lost years. They all blend together by now.

All this explains why you had to be happy watching Friday’s celebration. And you know who deserves to be happiest? The lifers inside that franchise. I see ushers who have been there forever, support staff of the team who give a smile in acknowledgement in passing in the halls.

Randy Moller has worked there for decades, a good and fun-spirited announcer who laughs that his final year playing was 1994-95 — the year before they went to the Stanley Cup Finals. His broadcast partner, Steve Goldstein shouted his trademark, “Let’s go home, baby!” after Verhaeghe’s winning goal Friday.

He reminded me the other day that after he said it one night I mentioned it would be a good signature line for him. He then adopted it as such. Now he closed a series’ winner with it.

Ed Jovanovski, a rookie in the magic of 1996, is now a team broadcaster, giving a history lesson Friday as they showed highlights from that long-ago season. It’s hard to explain to people what it was like in 1996 when hockey took over South Florida — or the passion in 1997 when, say, general manager Bryan Murray traded center Stu Barnes.

South Florida was irate. He traded Barnes? Why was he breaking up that team? People cared then. Maybe Friday night was finally a step back toward that.

“There’s been a lot of talk of not winning, getting knocked out in the first round,” Barkov said. “It’s been there … It’s not there anymore.”

For the first time in 26 empty years, there was something tangible to hold. Jonathan Huberdeau, a Panthers standout for 10 years, was able to casually say what no Panther player has said this time of year, what has been a quarter-century in the waiting.

“Now we’ve got to think of the second round,” he said.