90% of People Want Gun Control But Won’t Get It 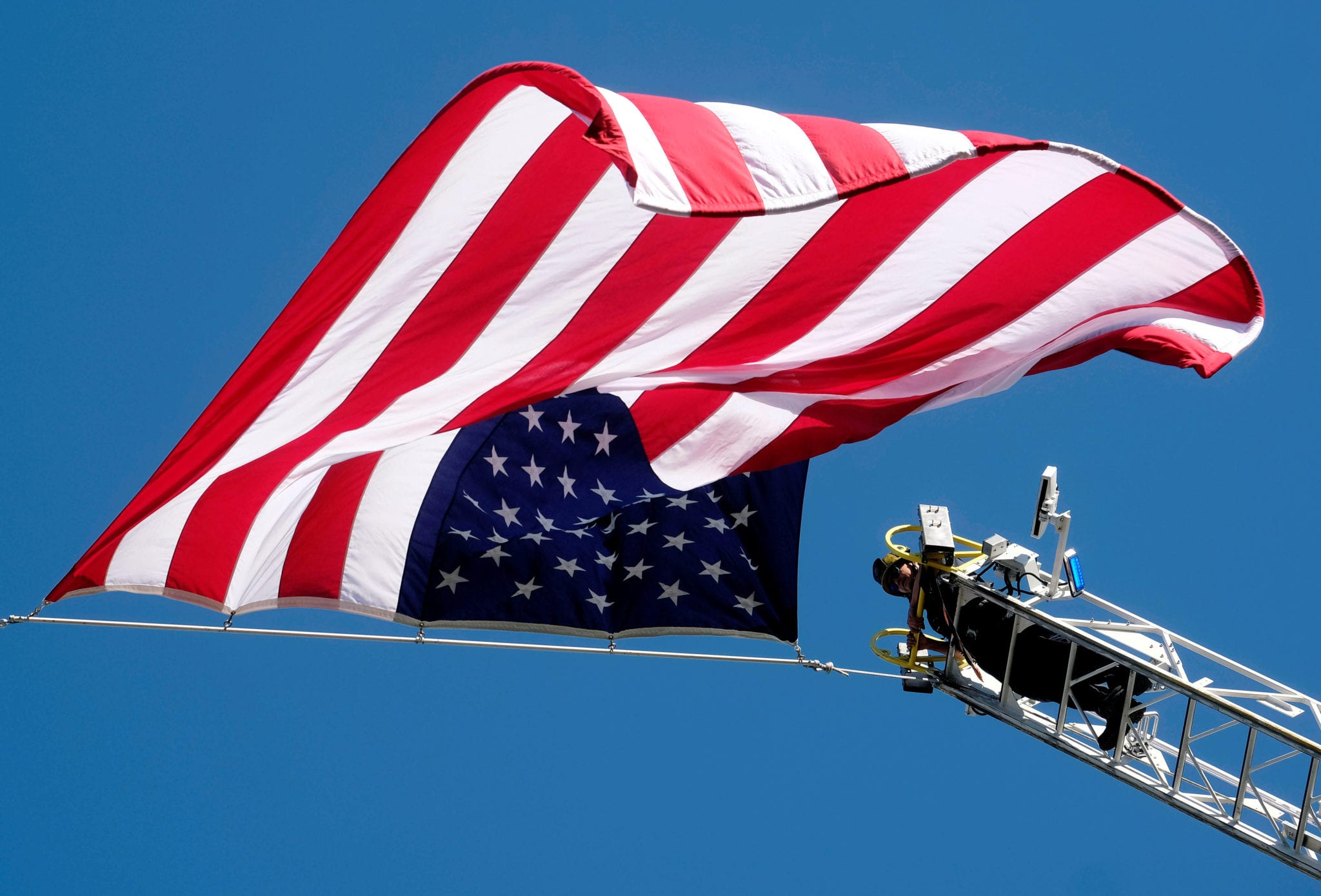 Over and over again, polls show that between 80-90% of Americans support expanded background checks for gun purchases. But we can’t get it done.

It’s Monday around noon as I’m writing this. On Sunday afternoon, CNN’s Jim Acosta tweeted, “CNN: Since Friday, there have been at least eight mass shootings in America.”

Two hours ago, he updated that horrifying figure: “Now 10 since Friday.” This is how quickly the mass shootings are accumulating — stealing loved ones, destroying families, and for those capable of compassion and empathy, weighing us all down with unspeakable collective grief, and then rage because the people who are supposed to represent us, who are paid to do so, refuse to take action. Democrats in the House got it done, and then passed it to the U.S. Senate, where the (appearances only on most days) Democratic majority is way too slim to get basic legislation passed if it is any good for The People and also infringes upon the rights of special interest groups and or the very wealthy.

CNN headlined, “America’s deadly weekend of more mass shootings raise stakes for Senate gun talks… The horrific new trail of death and injury, of broken families and mourning and fear, raised the stakes for the Senate’s latest effort to finally do something to stem the shootings and massacres and the costs for yet another political failure.”

That’s some pressure for Republicans, but they’ve sustained and even pivoted from an actual domestic terrorist attack led by their Party leader and President at the time, with very little political loss. The Republican plan was to just keep pivoting to inflation until people forget. And oh, how easily too many Americans forget and move on.

There’s talk that something might maybe sort of be happening on gun control in the Senate, where Republicans maintain the power to stop most legislation due to outdated and abused filibuster rules that two Democratic senators refuse to adjust even for something this serious. Even when children are slaughtered at school.

So we have to ask ourselves, WHY. Why is it this hard to get something basic done, something so basic it is literally about life and death? DEATH and TRAGEDY surround us, and still, conservative Republicans refuse to act, such is the power of the “Russian asset” lobbying group known as the NRA.

What does it mean if 90% of Americans want the right to life, a right enshrined in the Constitution, but can’t get it because their lawmakers refuse — for decades– to respond to the will of the people? It means we need to admit that our country is not functioning as the democracy it bills itself as.

The city upon the hill, the beacon of hope the United States is supposed to be, is bedraggled and torn apart. The biggest signals that our democracy is faltering in a rather significant way are the ho-hum attitude of Republicans toward the actual domestic terrorist attack on our Capitol with the political goal of making an election null and void so they could install Donald Trump as president and a Supreme Court ignoring that a sitting Justice covered-up his wife’s attempts to overthrow democracy, perhaps because that court is now stacked with Trump hacks to the point of losing credibility not over ideological issues, but over basic law and order and integrity. This is not a SCOTUS anyone is going to look to as an example of freedom.

In studying how democracies die and the global rise of authoritarianism, one consistent element is that if it’s done well, people don’t really know. It becomes a simulated democracy. Fewer than a fifth of the world’s people now live in fully free countries, according to a Freedom House report from March of 2021.

That feeling you might have? The one that says things don’t feel right and it’s a little scary sometimes? That feeling is sadly right on the money.

Freedom House found, “Authoritarian actors grew bolder during 2020 as major democracies turned inward, contributing to the 15th consecutive year of decline in global freedom… The report found that the share of countries designated Not Free has reached its highest level since the deterioration of democracy began in 2006…”

The United States was downgraded. We were labeled a “troubled democracy.” Indeed.

“Those affected include not just authoritarian states like China, Belarus, and Venezuela, but also troubled democracies like the United States and India.

The prescription is democratic governments working together – which is one reason why the united global response among democracies to Russia’s invasion of Ukraine is so timely and important. The struggle is not just in Ukraine. It is crystalized and apparent in Ukraine, but we are actually fighting this same fight, albeit not overtly, all over the globe and yes, here in the United States.

The United States had never come closer in appearances to an authoritarian regime than under Donald Trump, who weaponized the power of the federal government to hurt political opponents, wanted desperately (and ever so ironically) to militarize Independence Day parades and ordered tanks to do it and of course, Trump proudly told reporters “we have the brand new Sherman tanks” when the Sherman tanks haven’t been used since the 1950s (much like most of Trump world), reportedly gassed protesters in Lafayette Park (and then denied it) so he could appear like a strongman and take a photo with a Bible in his hand, and ultimately sought to overturn an entire election with the help of way too many elected Republicans for comfort.

For example, Republican state senator Doug Mastriano, who is running to be governor of Pennsylvania and is bragging about installing a Secretary of State that will do his bidding. Mastriano used campaign funds to send six charter buses to the Capitol on January 6th. “J. J. Abbott, a Pennsylvania political analyst, told me that he believes Mastriano is even more dedicated than Trump to overturning elections. “Unlike Trump, Mastriano really believes what he’s saying,” Abbott said. “He’s seriously committed to mobilizing and organizing people who share his world view and has been working his whole life on the ability to implement these ideas.” (Mastriano did not respond to a request for comment.)”

In a functioning democracy, Mastriano would not be able to win a primary in a state where he tried to steal votes from the majority of voters. But he did, and very comfortably. Republican voters know what they want, they want a dictator for their side who will overturn elections they lose.

But ultimately, Trump was his own worst enemy and aside from Putin’s whispers which were designed to undermine our democracy (and did), on his own Trump wasn’t full of ambitions and he displayed such a fragile ego that anyone who was paying attention found him laughable and weak instead of the strongman image that is needed for a totalitarian or authoritarian takeover. Trump was, at his core, incompetent as he has been at every business venture he tried except for branding and propaganda about his “name” and “wealth.” His cult fell for these lies, but the larger world knew better and he just wasn’t taken seriously. He was scary at times, he operated with a love for chaos that served his need to be the only person with power around himself, but Trump was not a competent leader.

Perhaps the final blow to Trump was his administration’s mismanaged Coronavirus pandemic and the resulting economic shock. A bad economy is a death knoll for a dictator, and perhaps that’s why Trump and Republicans fought so hard to continue ignoring Covid and some even suggested we needed to let the elderly die for the sake of Trump’s economy.

However, better candidates await in the wings and are currently destroying the states of which they are governors.

The issue is that while we have it in our collective conscious that totalitarian regimes look like tyrannies of Stalin and Hitler, which used mass terror to accomplish many of their goals. But successful authoritarians have become more sophisticated in the 20th century.

“We develop an informational theory of dictatorship. Dictators survive not because of their use of force or ideology but because they convince the public—rightly or wrongly—that they are competent,” Sergei Guriev and Daniel Treisman posited in their November 2015 draft of “How Modern Dictators Survive:An Informational Theory of the New Authoritarianism.”

“…in recent decades, a less carnivorous form of authoritarian government has emerged, one better adapted to the globalized media and sophisticated technologies of the 21st Century,” they write in their informational theory. “From the Peru of Alberto Fujimori to the Hungary of Viktor Orban, illiberal regimes have managed to consolidate power without isolating their countries from the world economy or resorting to mass killings.

How do they do it? They “simulate democracy, holding elections that they make sure to win, bribing and censoring the private press rather than abolishing it, and replacing ideology with an amorphous anti-Western resentment.”

Even here in the U.S., the Republican Party has somehow managed to create a culture of resentment toward what the West stands for, even while wrapping this resentment in a flag and a Bible.

When opponents of fascism warn that “democracy is on the docket” this midterm, it is actually not hyperbole. It is not a get out the vote tactic. It is an actual real thing that is happening to this country. And I wonder if we have a nation of heroes willing to peacefully stand up and say no to this takeover or a nation of sleeping marks, easily fooled into voting against our own interests and distracted with celebrity civil suits and borrowed Marilyn Monroe dresses. Too many localities didn’t even bother to run Democratic candidates for positions that have authority over voting. It’s no longer a given that Republicans believe their job is to honor this country and her freedoms, so this doesn’t bode well.

Will the fall midterms be the last election in which our votes are “counted”? This sounds dramatic and I’m not a fan of hysterics. But I also want to honest with you all. As I see it, we are at risk.

We are fortunate to have President Biden and Speaker Pelosi leading the charge for democracy, and Majority Leader Chuck Schumer trying to wrangle that beast in the Senate. But even this, for which many of you worked so hard, is not enough. We need to elect even more Democrats who care about small d democracy and will put saving ours as their number one priority, and yet the maps are against democracy this year. So it will take heroic efforts, once again.

Democracies do not survive complacency – there is always an entity waiting to rip power from the People. We must stay vigilant, non-violent, persistent, and demanding of representation.