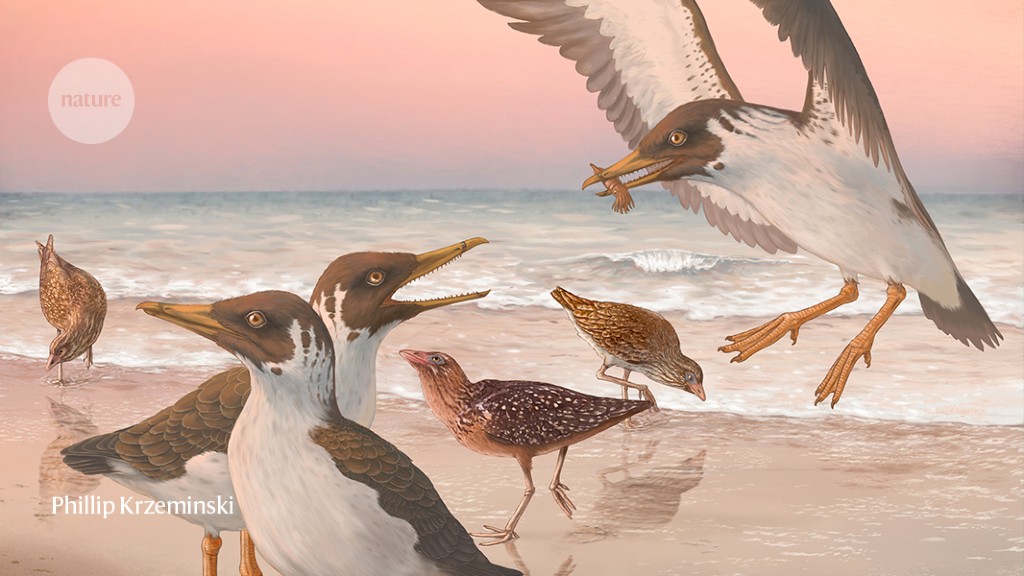 A prehistoric toothed bird that lived 67 million years ago is turning the bird tree of life on its head. The bird — named Janavis finalidens — shares crucial features with its modern cousins such as chickens and ducks, which is forcing a rethink about bird evolution1.

A stone-encased fossil was plucked from a Belgian quarry two decades ago2. It was found in a geological layer that dates back to the Late Cretaceous period (100.5 to 66 million years ago), just before the mass extinction event that wiped out all non-avian dinosaurs. At the time of the fossil’s discovery, it seemed to comprise just a handful of bones from the spine, wings, shoulders and legs.

Daniel Field, a palaeontologist at the University of Cambridge, UK, and his colleagues, re-examined the bones using micro-computed tomography to better investigate its anatomy. From those scans, they were able to describe the specimen as a new species of ancient bird that shared a common ancestor with modern birds. When it lived, Janavis finalidens would have been similar in size to a grey heron. The study is published in Nature today.

The team also discovered that one of the bones, previously thought to be a shoulder bone, was actually from the skull — a bone called the pterygoid. “It is from a very interesting part of the skull, from the bony palate of the bird,” says Field. The bony palate has crucial features that researchers use to group birds, both living and extinct.

Most of the world’s 11,000 bird species belong to a group called the neognaths, or ‘new jaws’. Key bones in the neognath palate are mobile, allowing the birds to move their upper beak independently from their skull. A much smaller group of birds including the flightless emu, cassowary, ostrich, kiwi and the flighted tinamous, make up the palaeognaths, or ‘ancient jaws’. The bones in their upper palate — including the pterygoid — are fused together.

As their names suggest, it has long been assumed that the ancient-jawed palaeognaths appeared firstand the neognaths descended from a palaeognath ancestor, after the last common ancestor of all modern birds lived some 80 million years ago, says Field. In part, this is because non-avian dinosaurs that pre-date modern birds also have fused palates.

That assumption has been hard to test because the small, delicate pterygoid is usually missing from fossils, says Thomas Stidham, a palaeontologist who studies bird evolution at the Chinese Academy of Sciences in Beijing.

“It’s a reverse way of looking at things to what we often have been assuming,” says vertebrate palaeontologist Trevor Worthy at Flinders University in Adelaide, Australia.

One question that remains, says Stidham, is how the unfused palate of species such as Janavis evolved from their fused-palate dinosaur ancestors. He says that bird fossils from the early Cretaceous – if they have preserved pterygoids — could hold to answer that question.

Bones of the upper palate are crucial for bird beaks’ function, says Gerald Mayr, a palaeornithologist from the Senckenberg Research Institute and Natural History Museum in Frankfurt, Germany. The unfused palate of neognaths “increases the flexibility of the beak and improves the use of the beak as a tool,” he says.

If palaeognaths are derived from a neognath ancestor, it is unclear why they developed the fused palate structure that emus, ostriches and kiwis bear today. “There’s no obvious reason for that if the other morphology is more advantageous,” says Mayr.

Fused palates aren’t necessarily a drawback, says Stidham, and could give beaks of larger birds additional support. Although the structures differ, “the function is basically the same”, he says, and both versions are able to flex and transfer force towards the beak tip.

Field and his colleagues will test this hypothesis by looking at the early developmental stages of modern-day palaeognaths. If there are different ways of forming a fused palate, that could indicate that the trait arose independently on several occasions.