420 Music Festival, Cranbrook graduate exhibition, the architecture of Albert Kahn, and more things to do this week | Things to Do | Detroit 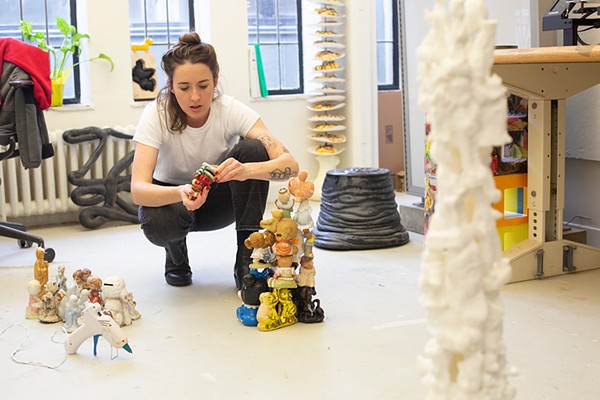 Select events happening in metro Detroit this week. Submit your events to metrotimes.com/calendar. Be sure to check venue websites for COVID-19 policies.

Saturday, April 23: It’s time to get high in the park and enjoy some music, which sure, people have been doing since forever, but this annual 420 event by Liv Cannabis does sound pretty dope. The festival is going down all day long at Adado Riverfront Park in Lansing with performances by rappers Curren$y, Too $hort, Bun B, and more. Even if you don’t know him by name, you’ve probably heard a few tracks Bun B’s rapped on. The Southern rapper makes up one half of the duo Underground Kingz. (Jay Z’s “Big Pimpin” anyone?) Mike Tyson will also be making an appearance to promote his weed brand Tyson 2.0, which recently launched in Michigan in partnership with Common Citizen, an event partner for the fest. Besides music there will be food trucks, cannabis and non-cannabis vendors, and designated consumption areas onsite. —Randiah Camille Green

The festival is from noon- 11 p.m. at Adado Riverfront Park; 201 East Shiawassee St., Lansing; experience420fest.com. Tickets are $50 for general admission or $200 for the VIP package, which includes a gift bag from the sponsors, exclusive viewing area, private restrooms, and a juice bar. Fancy.

Friday, April 22 and Saturday, April 23: According to a press release, the work of Michigan-based poet Cal Freeman “has the heartbeat of the blue-collar worker and the vocabulary of a scholar,” and he is “likely the only poet to have read at Cambridge while sporting a Detroit Lions hat.” The poet is celebrating the release of his latest collection, Poolside at the Dearborn Inn, with a couple Detroit-area readings. On Friday he’ll join Michael Lauchlan, Zilka Joseph, and Jason Storms at Pages Bookshop in Detroit, with music by Ryan Dillaha. On Saturday, he’ll perform alongside Alise Alousa, Dan Denton at the Gaelic League National Poetry Month Celebration, with music by the Codgers, Enda Reilly, and Dillaha. —Lee DeVito

Saturday, April 23: Industrial architect Albert Kahn is responsible for some of Detroit’s greatest hits, including the Fisher Building, the Conservatory and Aquarium on Belle Isle, and a number of early auto plants, among many others. The Detroit Historical Museum has collaborated with the Albert Kahn Legacy Foundation for this multi-media exhibition, which tells the story of the Jewish, German-born immigrant with photography, sketches, models, videos, and more. The exhibition runs through July 3. —Lee DeVito

Sunday, 4/24: For the past two years, more than 60 of Cranbrook Academy of Art’s graduate students have been honing their craft, in fields like 2D Design, 3D Design, 4D Design, Architecture, Ceramics, Fiber, Metalsmithing, Painting, Photography, Print Media, and Sculpture. This week, they showcase their hard work. The annual student exhibition opens for ArtMembers from 6-9 p.m. on Saturday, April 23 and opens to the public on Sunday. The show runs through May 15. —Lee DeVito

Sunday, April 24: This event is looking to help fill the 25-year gap left by the state of Michigan after 16 mental health hospitals were closed due to “under usage” in 1997. “This is a family event,” says Prostell Thomas, an organizer and founder of the fair. “It was literally born from relationships we have with the healers and the ones needing healing. I have family members that were 6 years old when the state shuttered the mental health facilities that are now struggling with mental disorders with no place to turn.” The fair will feature on-site counselors, a men’s healing circle, grief counseling, a relationship panel, and holistic practitioners providing workshops. “The emergency mental health system was a dead end,” Thomas adds. “The numbers they gave us were a maze that just led us back to the starting point. So I reached out to the people doing the work, like the Sasha Center. I reached out to the safe spaces like Avalon Village, the healers, the counselors, the mamas, the babas, and the educators. So this is the people doing what the system has failed to do.” —Kahn Satori Davison

Sunday, 4/24: The Michigan Squeeze Station has some seriously chill vibes and may just be one of Southwest Detroit’s newest, best-kept secrets (and the area has many). The small cafe is known for its smoothies, fresh-pressed juice, ginger shots, and coffee infused with cannabis. (They’re also available non-infused if you aren’t ready — the high from just one drink will last you all day, trust us.) The shop’s annual Infused Fest features food pop-ups and vendors selling everything from tacos, jewelry, art, edibles, and infused-honey. All the vendors are small, local businesses selling handmade goods. There’s also music performances by local acts and an open mic if you’re feeling brave (or high) enough. The fest goes from noon-4 p.m. at the Michigan Squeeze Station; 6716 Michigan Ave., Detroit; 313-784-9353. —Randiah Camille Green