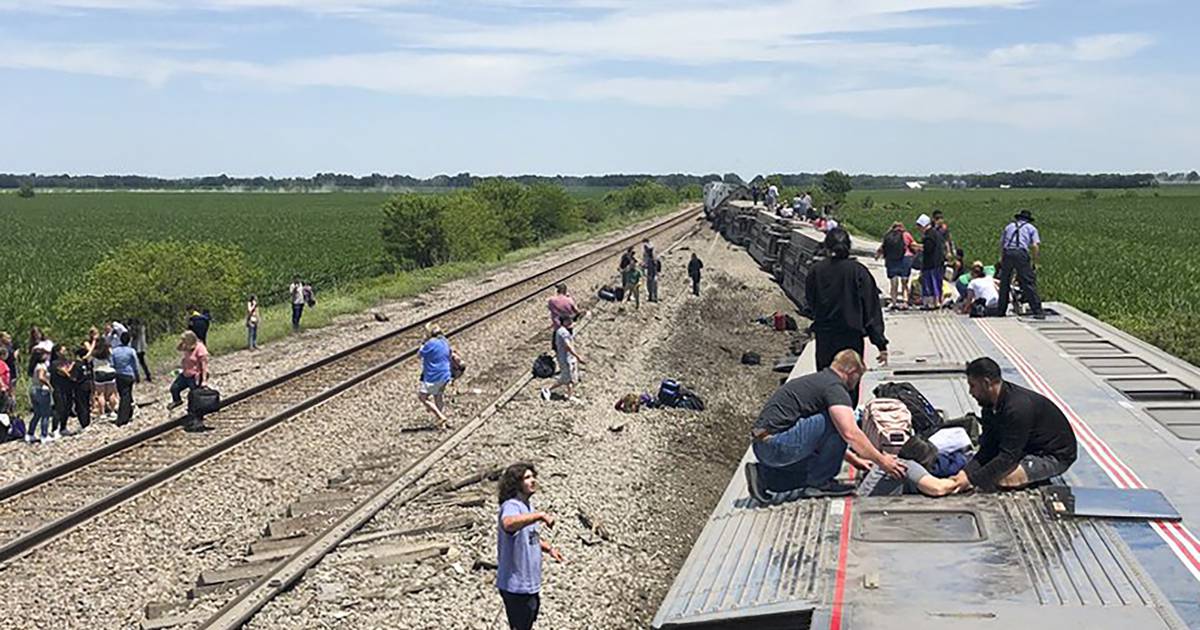 Three people were killed and others were injured when a passenger train traveling from Los Angeles to Chicago with about 275 passengers and 12 crew members struck a dump truck and derailed in a remote, rural area of Missouri on Monday, officials said.

Eight train cars and two locomotives on the Southwest Chief derailed after hitting the dump truck that was blocking a public crossing with no crossing arms near Mendon, Missouri, at 12:42 p.m., according to a statement from Amtrak. Local authorities were assisting Amtrak employees on the scene.

Two of the people who died were on the train, while the other was the driver of the truck that was blocking the crossing, Amtrak said. It was not immediately clear how many people were hurt, but nearby hospitals reported receiving more than 40 patients from the crash with more expected.

Three passengers were taken to University Hospital in Columbia, hospital spokesman Eric Maze said. He did not have information on their conditions.

The National Transportation Safety Board is investigating.

Robert Nightingale, a passenger, told CNN he was dozing off in his sleeper room when the crash happened.

“Everything started to go in slow motion,” he said, describing how the train rocked before tumbling onto its side.

“We all just sat there shocked,” he said.

“It was all over the tracks,” he said.

Nightingale, an art gallery owner from Taos, New Mexico, who said he rides Amtrak regularly to Chicago, was unhurt and said he and other passengers were able to climb out the overturned train car through a window.

Another passenger, Jason Drinkard, told KMBC-TV in Kansas City that the car he was in suddenly tipped over and people flew out of their seats and landed on each other.

“Seats were coming apart. Bags were going everywhere,” said Drinkard, who boarded at Kansas City’s Union Station. “And then, after it stopped, you could smell the fumes. And so people started panicking, thinking it was going to catch fire, so we tried to get out as quick as possible.”

Mike Spencer, who grows corn and soybeans on the land surrounding the intersection where the crash occurred, said everyone in Mendon understands that the intersection is dangerous, especially for those driving heavy, slow farm equipment. The approach to the tracks is on an inclining gravel road and it’s difficult to see trains coming in either direction, he said.

Spencer said he had contacted state transportation officials, Chariton County commissioners and BNSF Railway about the potential danger. Spencer, who is on the board of a local levy district, said the dump truck driver was hauling rock for a levy on a local creek, a project that had been ongoing for a couple of days.

Other passengers on the train included high school students from Pleasant Ridge High School in Easton, Kansas, who were headed to a Future Business Leaders of America conference in Chicago, Superintendent Tim Beying told The Kansas City Star, as well as 16 children and eight adults from two Boy Scout troops who were headed to Appleton, Wisconsin, after spending time in New Mexico.

No one in the Boy Scouts group was injured, said Scott Armstrong, director of national media relations for the Boy Scouts of America, and the group helped administer first aid to several injured passengers, including the driver of the dump truck.

At least eight medical helicopters were responding from around the state, Matt Daugherty, LifeFlight Eagle director of business development, told The Kansas City Star. Daugherty said he knew there were a number of injuries and some people were in critical condition.

Helicopter video shown by KMBC-TV in Kansas City from the scene showed rail cars on their side as emergency responders used ladders to climb into one of them. The video also showed six medical helicopters parked nearby waiting to transport patients.

Before reaching Chicago, the Southwest Chief line includes a stop in Naperville. Other Illinois stops on the route are Galesburg, Princeton and Mendota.

The Southwest Chief takes about two days to travel from Los Angeles to Chicago. Mendon is about 84 miles northeast of Kansas City.