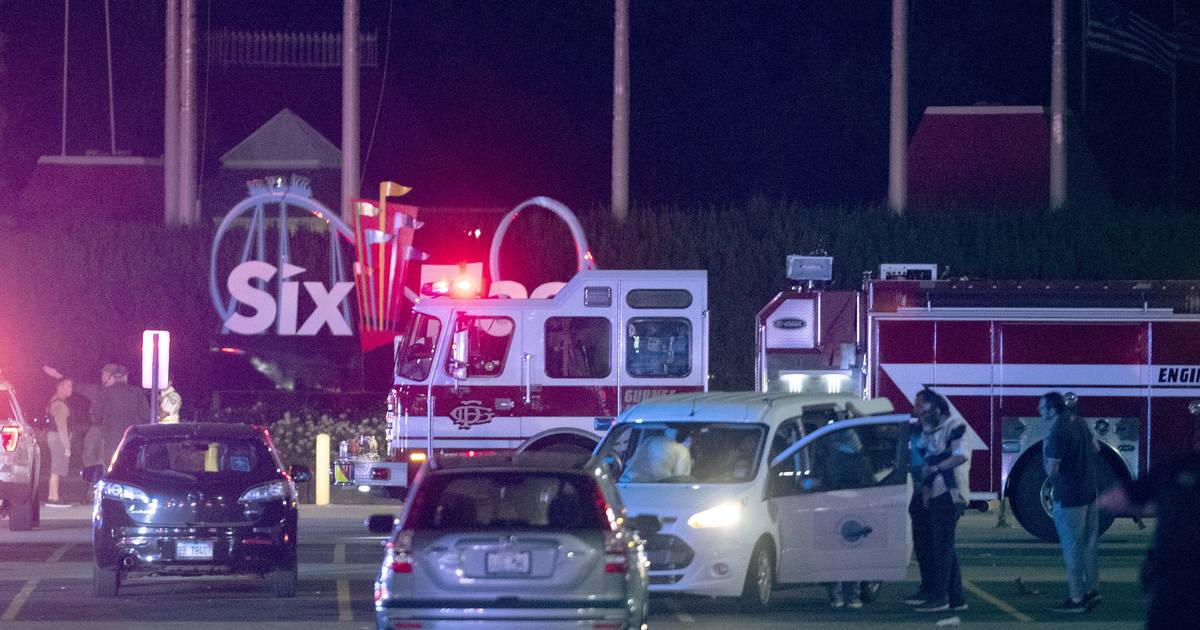 When Aisha Tahir went to buy her kids funnel cake at the end of a long day at Six Flags Great America, she saw things scattered about the food hut’s kitchen. People were hiding under the windows.

They feared for their lives after a gunman shot two people in the Gurnee amusement park’s parking lot Sunday night.

“The way people were panicking, it made us feel like the shooter was close by. And when we saw the police entering the park, we thought the shooter was loose somewhere inside,” the Kenosha resident said.

The shooting was not random and appeared to be targeted, Gurnee police said. No arrests had been made as of Monday, and police were still investigating, according to Shawn Gaylor, a spokesman for Gurnee police.

But the gunshots sparked chaos, confusion and fear among hundreds of park visitors.

Many fled to the same parking lot where shots were fired. Others hopped fences and tried to break open locked exit gates to escape.

The bullets struck a 17-year-old Aurora boy in the upper thigh and hit a 19-year-old woman from Appleton, Wisconsin, in her lower leg, police said. Both shooting victims were treated at Advocate Condell Medical Center in Libertyville for injuries not considered life-threatening and released Sunday night, police said. A third victim who suffered a shoulder injury declined additional treatment.

After noticing the visitors taking shelter at the funnel cake stand, Tahir saw people running and heard yelling about the shooter. Her family ran to a bathroom, where an employee guided them to a hiding spot before escorting them out of the park 20 minutes later.

She lied to her kids as they hid. The commotion was over fireworks, she told them. But the kids heard people yelling about the shooter.

Tahir worries about them heading back to school in two weeks. She knows that no place is safe, she said. The 32-year-old mother had talked with her children before about what to do if a gunman attacks their school. They need to be prepared wherever they go, she said.

“I feel helpless. I don’t know what to do to make the lawmakers understand that gun violence needs to end,” she said.

Authorities said a white sedan entered the parking lot of Six Flags about 7:50 p.m. and drove toward the front park entrance. Gurnee police said more than one person exited the sedan “and began shooting toward another individual in the parking lot.” After firing multiple times, they “got back in the white sedan and quickly left the area,” according to a news release from Gurnee police.

“This was not an active shooter incident inside the park,” police wrote.

Eddie Cardenas was with his fiancée and their three kids when his mother-in-law called. She had left the park for the car to get a head start on prepping food.

Shocked by the news, Cardenas and his fiancée began to plan. But then dozens of people started running, Cardenas said.

The couple grabbed their kids — a 7-year-old boy, a 5-year-old boy and a 5-month-old girl — and started running. They took shelter behind the soaring Raging Bull steel coaster and took off again a few moments later.

Their stroller was moving too slow, so Cardenas tossed it and put his 5-year-old on his shoulder. His fiancée left a purse behind, too. His 7-year-old son ran ahead and was almost lost in the confusion. Cardenas saw police with guns drawn. In a video he shared with the Tribune, people shrieked and tugged kids along.

Outside the park, Cardenas regrouped with the nearly 30 family members he had joined for the Great America trip. He saw scared uncles waiting for their teens, who had split off earlier to go on rides.

His 7-year-old said he didn’t want to go to Six Flags ever again.

“These are not toys,” he told his parents, according to Cardenas.

His wife ordered the kids, who return to school soon, five-pound backpack shields.

After the shooting, the family took a moment to pray in the car. One of Cardenas’ children thanked God that the family wasn’t killed.

“The world that we live in, where our 5-year-old and 7-year-old have to be worried about shootings, being shot and dying, it’s scary. It’s a really scary world,” he said.

To protect Six Flags Great America, authorities use security cameras inside the park and in the parking lot, a Six Flags spokesperson said. Uniformed and plainclothes patrols monitor the park, which has a Gurnee Police Department substation on site.

“Layers of preventive measures both inside and outside the park are in place for the protection of guests and team members. … We are incredibly grateful to our team members who reacted in a professional manner to take care of our guests, and for the Gurnee Police Department for their ongoing presence and commitment to Six Flags Great America,” Kendziora said.

The Great America amusement park is an 18-mile drive from Highland Park, where a mass shooter opened fire on a crowd gathered for a Fourth of July parade, killing seven and wounding dozens.

Tane Walker was on a Highland Park parade float when the shooting happened. On Sunday, he had left Six Flags earlier in the afternoon, hours before north Chicago suburb crowds would once again flee in fear of gun violence this summer.

Worries about what might happen if a gunman tried to attack the park crossed his mind earlier Sunday, the 16-year-old said. It feels unsafe to leave the house or go anywhere in public, he added.

Walker will soon return to class at the school where he and his family received trauma counseling after the Highland Park shooting.

“Nowhere is really safe until change is made,” he said.